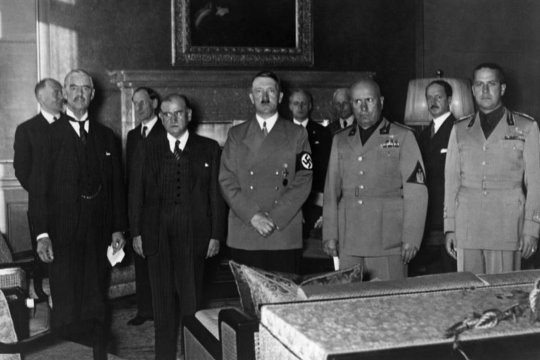 The Munich Betrayal, presented to the world as the Munich Agreement, was a pact drafted in Munich on September 29, 1938 and signed on the next day, September 30, jointly by the British, French and Italian Prime Ministers Neville Chamberlain, Édouard Daladier and Benito Mussolini and Chancellor of the German Reich Adolf Hitler.

For London and Paris, the deal was to secure the interests and territories of Britain and France from possible aggression by Hitler-run Germany. In exchange, the Chancellor of the German Reich got Paris and London’s assurances of non-interference with his plans to launch operations in Central and Eastern Europe which began with the German occupation of Czechoslovakia in 1939. However, as Russian historian Oleg Budnitsky quite rightly points out, the policy of appeasement chosen by Britain and France towards Hitler was a dead end from the very start. According to Budnitsky, “the nations that won World War I ceded their victory without a single shot fired on September 30, 1938.” As he expands further, “the Munich Agreement had one immediate consequence, namely that the smaller nations of Central and Eastern Europe lost any confidence in Britain and France as reliable allies. As a result, some of these nations started looking up to Germany. Another effect of the Munich Agreement was that it made clear to Stalin that European nations do not take him into any consideration politically, forcing him to become more suspicious and start seeking other ways to maintain the USSR’s security. In the end, this led to Stalin’s signing an agreement with Hitler known in history as the Molotov–Ribbentrop Pact because it was signed by the Foreign Ministers of the two nations, although they obviously were acting on orders from the heads of the states. There is no doubt that this pact was one of the consequences of the Munich Agreement.”

So it would be no exaggeration to say that, as Budnitsky puts it, “Hitler freed Germany from any penalties imposed by the Treaty of Versailles without s single shot fired.”

Was there any real alternative for Britain and France to pursue instead of striking a Munich Betrayal deal with Hitler? Comparative analysis of the military capability of the German Armed Forces against that of the Anti-German Coalition of the USSR, Czechoslovakia, Great Britain and France gives every reason to conclude that Hitler’s threats to London and Paris were nothing but a bluff. During the Nuremberg trials, when asked whether Germany would have attacked Czechoslovakia in 1938 if Prague had the support of its Western allies, former Chief of the High Command of the German Armed Forces Wilhelm Keitel replied, “Of course not. We were not strong enough in terms of our military capacity. The purpose of the Munich Agreement was to push Russia out of Europe, win time and finish building up our military strength.”

Authorized representatives of Britain, France, Germany and Italy convened without informing or consulting with Czechoslovakia. In the history of diplomatic relations, there is hardly another case of the international law being violated as blatantly as this one. There wasn’t much discussion during the meeting; rather, it was a formal sign-off gathering to endorse the four-party deal that had already been pre-agreed. The draft of the agreement was proposed by Mussolini who in fact had received it from Berlin.

The draft’s final version consisted of the agreement, an addendum and three additional declarations. The agreement itself captured the consent of the four powers to the German annexation of the Czechoslovak borderland area named the Sudetenland, as well as any other Czechoslovak territories populated mostly by ethnic Germans. The annexation was to start on October 1 and be completed by October 10. Czechoslovakia was instructed to cede all the above territories with the complete and unharmed infrastructure. An “international commission” representing the Munich deal parties and Czechoslovakia was to oversee the transfer of the territories. The addendum specified that Britain and France were willing to extend “international guarantees” to Czechoslovakia’s security within its new borders against any unsanctioned aggression. Germany and Italy also vowed to give Czechoslovakia their guarantees after settling the issue of the Polish and Hungarian minorities living in Czechoslovakia within three month’s time.

In reality, the Munich Agreement sanctioned partitioning of Czechoslovakia, pure and simple. Germany was getting 20% of its territory, as well as a quarter of its population, and on top of that a lot of military infrastructure and half of the country’s mining and steel-making businesses and railway roads.

The Czechoslovakian delegation was led into the meeting room after the conference was over and only Chamberlain and Daladier and their staff had stayed behind. The Czechs were informed of all the decisions made and told that they were final. In a few hours, the government of Czechoslovakia announced accepting the Munich Agreement.

In his speech in the House of Commons on October 5, 1938, Winston Churchill did not offer any praise to Prime Minister Chamberlain for signing the Munich Agreement as most other MPs did. Instead, his criticism was sharp, as he called this achievement nothing but a “total and unmitigated defeat.” He said, “France and Great Britain together, especially if they had maintained a close contact with Russia, which certainly was not done, would have been able in those days in the summer [of 1938], when they had the prestige, to influence many of the smaller states of Europe; and I believe they could have determined the attitude of Poland at a time when the German dictator was not deeply and irrevocably committed to his new adventure.”

And it was the only truthful and insightful account of the critical situation the world had on its hands. Winston Churchill was speaking not only as Prime Minister Chamberlain’s opponent on the domestic political scene, but also and perhaps more as a serious politician who feels responsible  for the global outcome. He saw clearly that the purpose of the Munich deal was to push Russia out of Europe so that Germany would win time and finish building up its military strength. But those were, in Churchill’s own words, his wilderness years, when he had no support from any of the decision-makers on the global political scene, even though Sir Winston could foresee the disastrous consequences of the Munich Agreement. Addressing Britain’s Prime Minister Neville Chamberlain, Churchill said, “Britain and France had to choose between war and dishonor. They chose dishonor. They will have war.”

In one of his speeches, Russian Foreign Minister Sergey Lavrov said about the Munich Betrayal the following:

“While danger loomed over Europe, some Western governments made a selfish and extremely shortsighted choice of trying to appease the Third Reich in order to ensure their own security at the expense of the others. In 1938, the Munich Agreement crowned that shameful and essentially criminal policy. There is hard evidence that both London and Paris kept stalling all the proposals coming from Russia about establishing a collective security system – even in spring and summer 1939 when it became obvious that a conflict was unavoidable. Being so naïve as to think they could stay unscathed by the war, the Western powers were playing a double game hoping to direct Hitler’s aggression eastwards.”