Munich Neglect - Azov Package of Sanctions instead of Minsk Agreements 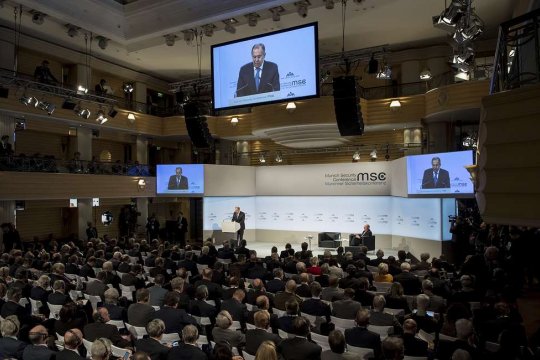 The 55th Munich Conference on security issues featured no separate panel on Ukraine. The statement by NATO’s former Secretary General Anders Fogh Rasmussen that “from the strategic point of view, Ukraine plays a very big role” was an attempt to make the pot sweeter.

What did they say about security at the Munich Conference? In 2018, this issue, which was key for Ukraine’s leadership, was supported by the report of the former NATO Secretary General Anders Fogh Rasmussentitled "Will the UN be able to unite Ukraine?" which was prepared by the American Hudson Institute in tandem with the Rasmussen Global Foundation [I]. The focal point of Poroshenko’s speech and Rasmussen’s report was a peacekeeping mission in  Donbass.

At Munich-2019, the Minsk Agreements, which is an issue that guarantees  European security, as distinct from the so-called “Russian threat” and “Russian intervention”, were left without attention. Instead, the participants focused on the “Russian aggression in the Kerch Strait”, which provided a reason for debate thanks to the Ukrainian provocation in November last year,  which is presented as the “Russian aggression”. The Minsk Agreements were brought up to attention by the US State Department Special Representative for Ukraine Kurt Volker, who did it in a Jesuit manner: “We are always in favor of meeting and having a discussion. Russia shows no interest or progress on this issue. In fact, they made it clear they did not want to do anything during the presidential election. The special envoy also acknowledged that the Minsk Agreements are not producing the desired effect. “They (the Minsk Agreements - DB) never worked well, as Russia refused to implement them. There has never been a ceasefire, a withdrawal of heavy weaponry, or cooperation on this issue. ” [ii] In other words, that Kiev is doing its utmost to stall and devalue the Minsk Agreements and that the West hasn’t been demonstrating any interest in them lately is Russia’s fault.

Last year Rasmussen reported about a draft peacekeeping mission in Donbass, this year he is talking about the possibility of Russian interference in the elections: “At present, we are all keeping a close eye on the election campaign in Ukraine, because it will be a testing ground, including in terms of Russia’s possible interference in the elections. I have no doubt that Moscow will try to resort to  measures and tools that could transform and be used also during the European elections in May this year and even in course of American elections in 2020.” [iii]

“There can be no global security or security in Europe without Ukraine,” Poroshenko said in Munich.[iv]  For Ukraine, European security means repulsing the “Russian threat” through sanctions, rather than working to resolve the conflict in the south-east of the country . As said above, the Minsk Agreements and the Normandy format received no attention in Munich this time. At a bilateral meeting with German Chancellor Angela Merkel Poroshenko concentrated on measures to  “coordinate actions to implement the Azov package of sanctions and on how to prevent the Russian interference in the presidential elections in Ukraine. ”[v] Poroshenko reported that he had discussed the Azov package with the Vice President of the United States Michael Pence: “We have thoroughly considered  coordination of our actions in response to the aggression in the Kerch Strait. We have thoroughly discussed further steps to impose sanctions and coordinate these sanctions with the sanctions of the European Union. We do count on cooperation, including in the defense sector, and in the supply of all types of weapons to Ukraine as we have adopted a law that allows the Ministry of Defense to import weapons directly.”[vi] The words of Michael Pence were perceived as a triumph of Poroshenko and Ukrainian diplomacy: “Let me send a very simple message to both you and the Ukrainian people:“ We are with you. ” The recent incident in the Kerch Strait serves as a reminder of the challenges that Ukraine faces because of the Russian aggression. I want to assure you that the United States supports Ukraine. ”

Ukraine had been getting ready for the Munich Conference in earnest, given that it is part of the election campaign of the official candidate to presidency and incumbent President of Ukraine Petr Poroshenko. He had something to present for the attention of his foreign colleagues: the provocation on November 25, 2018 in the Kerch Strait, and amendments to the Constitution of Ukraine, including a clause on joining NATO and the European Union.

Unlike the amendments to the country's constitution, which is an internal affair of Ukraine, and a course for joining NATO and the EU, which does not depend on Kiev’s readiness but on the decisions of NATO and the European Union as such, the provocation in the Kerch Strait went off well, providing a good reason for sanctions from the US and the EU, and for anti-Russian rhetoric and politics in general.

Judging by the statements by Ukrainian experts, the outcome of the Munich Conference has received both positive and negative response in Ukraine. What upset Ukraine? That the "Nord Stream 2" Project will go ahead. The fact that the United States will not slap sanctions on Europe in connection with the Project. [vii] The position of Kiev requires a fine balance. Ukraine does not like Trump, but he is the initiator of sanctions against Europeans in connection with “Nord Stream 2”. While Ukraine is committed to European integration, it openly welcomes  sanctions against Europe in connection with “Nord Stream 2” and favors the preservation of the transit of Russian gas through Ukraine, as what they once dubbed as the  "a necessary condition for European integration." A fairly tricky balance, in which the Minsk Agreements and the Normandy format are no longer visible.

How did the Munich Conference please Ukraine? By the coming sanctions, the so-called "Azov package." What also pleases Kiev is some coordination between the US and Europe in the expected sanctions package, even if it boils down to just a few restrictions, which is not bad either. Europe has come up with the Azov Package, and sanctions based on the provocation in the Kerch Strait are due from the United States as well. Each of the parties initiating the restrictive measures pursues their own goals. The European Union will impose restrictions in the wake of the incident in the Kerch Strait, but, according to the High Representative of the European Union for Foreign Affairs and Security Policy Federica Mogherini, these sanctions will be exclusively personal ones, targeting  8 individuals. [viii] This constitutes the entire policy of the European Union, which is anti-Russian, and in this the EU strikes a chord with the United States. However,  to spoil relations with Russia beyond repair is not on the agenda, particularly considering the agenda of the EU’s leading country, Germany. Berlin has a joint energy project with Russia – “Nord Stream 2”. Against this background, the “Azov package” from the EU, or in fact, putting a few people on the black list, is but a political and moral compensation for Washington, amid Berlin’s uncompromising position regarding the Nord Stream.

The Azov Package from the US will contain:

-sanctions against FSB agents who, according to the authors of the bill, are involved in the attack on Ukrainian ships in the Kerch Strait in November 2018;

-sanctions against the Russian shipbuilding sector, if Russia violates the freedom of navigation in the Kerch Strait or anywhere else;

European sanctions come as a tribute to the anti-Russian mainstream and are used to distract attention from Nord Stream 2. US sanctions reflect technological, political, and economic competition in shipbuilding and oil production. They create a threat to Nord Stream 2, the Northern Sea Route, and the Russian liquefied gas. Coordination of sanctions is currently visible only in their name and reliance on one provocative incident.

Nobody discussed Ukraine’s security at the Munich Conference, the Ukrainian panel was not even on the program. Perhaps, democratic countries, following democratic principles, thereby wanted to establish a democratic distance pending the presidential elections. What is obvious is that the West is interested in the  “Russian aggression” as one of the main components of present-day international politics, while Ukraine provides a good context and a very bright case within the framework of the anti-Russian policies of the West.