Muradov: Crimea is the foundation of Russian statehood, civilization and identity 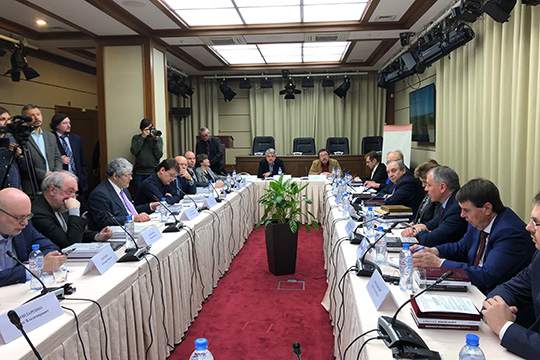 On March 12, 2019 representatives of the Historical Perspective Foundation and the Russian Historical Society, gathered for a joint conference in Moscow which was titled "The Crimean Triangle: Crimea - Russia - Ukraine 1954 - 2014".

The issue of Crimea, its return to be part of Russia and disputes about the significance of this event will for years remain a focal point in internal political and historical discourses as well as in Russia’s dialogue with Ukraine and countries of the West. The implications of the events of 2014 are extremely important for Russia for several reasons.

First of all, this for the first time in recent history that the so-called “Russian world” has consolidated its efforts to retrieve the territories it onced owned which were lost due to the failed policy of the post- Soviet leadership. Vladimir Konstantinov, Chairman of the State Council of the Republic of Crimea, said at the conference: “Crimea is a sacred place for Russia. The referendum in the Crimea came as a signal for the entire Russian world, for the entire world community about the agenda and the potential of modern Russia. ”

Secondly, Russia has strengthened its position in the strategically important south-west. For Russia, the Black Sea is an economic and military gateway to Southern Europe and the Middle East, the main theater of modern world politics. Natalia Narochnitskaya, President of the Foundation for Historical Perspective, rightly noted: “The Black Sea region is the so-called “hydrocarbon ellipse,” the artery through which natural resources flow from East to West.” Also, she said, Russia's dominant position in the Black Sea (which is possible only on condition it controls the Black Sea Fleet based in Sevastopol) helps our country to stabilize the situation in the Caucasus region. “We have seen how, in the 90s, the “creeping erosion” of military bases on the Black Sea affected the rampage of extremism and lawlessness in the North Caucasus and the Caucasus regions of Russia.

Thirdly, the annexation of Crimea and the consolidation of positions in the Black Sea is the first resolute move in Russia’s foreign policy of late. “Russia was thereby forced to provide a response to NATO’s expansion eastward. The Eastern Partnership program has exacerbated the already difficult situation in the post-Soviet space and has marked the first step towards a catastrophe in Ukraine,”- said Armen Oganesyan, Chief Editor of International Affairs.

Many experts deem the 2014 Crimean referendum the correction of two mistakes made by the country’s leadership in 1954 and 1991. If N. Khrushchev had not handed Crimea over to the Ukrainian SSR or, if,  when discussing the Belovezh agreements, the Russian delegation had secured a revision of the Soviet agreements within the framework of the new realities, there would have been no need for a referendum in 2014, since Crimea would have been part of the unified RSFSR, and later Russia. According to Vladimir Kruglov, a researcher at the Institute of Russian History of the Russian Academy of Sciences: “The Act of 1954 was an individual decision of a particular individual and  was then accompanied and is still accompanied by logical arguments: Khrushchev, acting in line with the predominantly anti-Stalin policy of the time, wanted to compensate for Stalin’s policies in Crimea in 1944 (deportation of the Crimean Tatars). Also, the transfer of the Crimea to the Ukrainian SSR was explained by “economic convenience”, since it was more convenient to supply the peninsula with everything necessary from mainland Ukraine. However, this does not justify the fact that no one bothered to ask the opinions of the people who inhabited this territory. With a high degree of probability it is possible to assume that this opinion would have been very similar to the results of the 2014 referendum, that is, the Soviet Crimeans would have voted to be part of the RSFSR. ” Of course, Khrushchev and other political figures of that period cannot be considered enemies of the people or traitors - they all truly believed that the Soviet Union was an “eternal state”, that it would last forever. Therefore, a shift of regional borders within the boundaries of a single country was not considered something irreparable or unlawful. But in 1991, the same regional borders became state borders, and there have appeared questions to the Yeltsin government. Although this time residents of Crimea were taken more carefully- they held a referendum on the status of Crimea. However, according to Sergey Tsekov of the Federation Council Committee on International Affairs: “The referendum raised the question of re-creating the Crimean Autonomous SSR as a territorial entity within the USSR and member of the Union Treaty, rather than joining Russia, since the status and future of the entire Union were uncertain at that time.” In this historical episode, the “new” Ukrainian diplomacy, not Russian, “won”, albeit, allegedly, thanks to consultations with the West. Once again, the Russian leadership naively assumed that the newly independent countries of the CIS would by bound by everlasting friendship. Only recently did Russia choose to be guided by the rule established by Emperor Alexander III: “Russia has only two allies — its army and navy.”

The referendum in Crimea was clearly the result of political developments in Ukraine. The unconstitutional coup d'état that took place in Kiev and the subsequent rampage of nationalism stimulated more activity on the part of the people of Crimea, who set the stage for the “Crimean Spring”. "The mindset of the Crimeans, formed by the heroic past of their forefaters, by wars and occupation, by the defense of their Motherland, did not allow them to put up with a situation in which they saw roughnecks freely walking around the capital bearing symbols of the forces against which their fathers and grandfathers had fought”- Georgy Muradov, Deputy Chairman of the Council of Ministers of the Republic of Crimea, said at the conference. "The Crimeans gave a signal to which Russia could not but respond," - he added. Naturally, the connection between the so-called “Euromaidan” and the “Crimean Spring” is clear to everyone in Ukraine, since it is a stigma that speaks of the illegitimacy of the current Kiev authorities. Our parliamentarians and diplomats have repeatedly pointed out that the illegitimacy of the coup d'etat in Kiev determines the legal opportunity and the legitimate right of entities or citizens to decide their future. Therefore, the Crimean precedent is very significant for the leadership of Ukraine and will definitely become a trend in Kiev’s foreign policy in the foreseeable future. Neither Donbass nor any other internal or external problem is as important as the loss of Crimea. In this sense, Crimea has tied Russia with Ukraine for years ahead, although on such a negative occasion. According to political analyst Rostislav Ishchenko: “The good point about the Crimean issue is not that now Ukraine will not join NATO or the European Union; but that the “problem” of Crimea can be settled  positively only in the event of complete reconciliation or unification of both countries. ”

Meanwhile, the Kiev leadership is using whatever methods are available to question and slander the results of the 2014 referendum. Official Ukraine is making use of all possible international platforms - such as the UN, the ECHR, etc. – to raises questions about alleged violations of human rights in Crimea, breaches of the rights of  minorities on linguistic, religious and other grounds. Kiev is resorting to any odious reasons and motives for the sole purpose of devaluing the legitimacy and significance of the events of 2014. The legal aspect of the Crimean referendum is crucial for the international status of Crimea and the position of the Russian Federation in the international scene. Allegedly, the illegitimacy of holding a referendum and the subsequent annexation of Crimea by Russia became the cause of countless sanctions from the West and gave rise to speculation in the foreign and domestic policies of a number of countries. Crimea helped to restore in the eyes of the western “public” the image of Russia as an enemy encroaching upon  the rights and freedoms of the civilized world. Many experts openly say that the issue of Crimea has miraculously saved cash-strapped NATO and brought the funding of the US military-industrial complex to an all-time high. “Given the situation, Russia looks a party on the defensive, trying to provide explanation for its actions. And, in my opinion, it is offering the wrong excuses, ”- said Mikhail Remizov, President of the National Strategy Institute. He also added that “Russian officials are wrong to be drawing a parallel with the precedent in Kosovo. The rhetoric is as follows: you (the united West, NATO forces - author's note) were the first to violate international law in Kosovo, therefore we breached it in Crimea. The West first allowed the formation of terrorist cells in Kosovo, and then when Milosevic tried to neutralize them, under the pretext of protecting civilians, it helped Kosovo to secede. Consequently, it turns out that in the case of Crimea, this parallel is also visible - that Russia first incited “Russian separatists” in Crimea into active civilian action, and then under this cover helped Crimea with self-determination ”. The Crimean precedent, he said, is a completely unique case. It cannot be put on the same footing as Kosovo, Texas, Taiwan, Quebec, the Aland and Falkland Islands. History knows a lot of instances of secession, annexation and self-determination of countries and territories. All these cases are unique and each of them requires  individual approach and evaluation. According to M. Remizov, Russia needs new grounds to lean on in its discourse on Crimea on the international arena: “It is worth changing the model of behavior, and for that matter, if need be, consider other historical examples, such as the roles assumed by Britain and France, which, in the case of self-determination of the Falklands and the Islands of Mayotte acted as arbitrators in a territorial dispute.” N. Narochnitskaya rightly remarks that "some historical precedents go beyond the framework of existing international legislation and cannot be regulated by it."

Thus, the 2014 referendum in Crimea is a landmark event both for Russia and for the rest of the world, especially for European mentality, since it reveals the nature of the double standards policy, which until the “Crimean Spring”, came easy for the western establishment. The referendum in Crimea met all standards of democratic will expression, which is the cradle of Western civilization. However, Brussels and Washington question the legitimacy of the vote. But time, as always, will put everything in place. “Recognition of Crimea by the world community de jure is a matter of time, because de facto recognition is already taking place and will come into being in the same way it happened, for example, to the Republic of Northern Cyprus: no one officially recognized the RNC being part of Turkey, but everyone goes there to rest and they do business with Northern Cyprus. I think we will soon witness the same in Crimea, ”- A. Oganesyan added at the end of the conference.