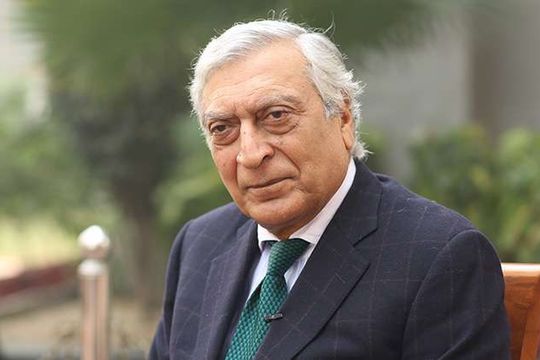 At the request of the editors of International Affairs magazine, the renowned Kanwal Sibal, India's Foreign Secretary and Ambassador to Turkey, Egypt, France and Russia, expresses his assessments of the situation in the world and forecasts of development in the coming year 2021.

International relations will remain in flux in 2021. The international community has been further fractured in recent years for several reasons. The slowdown of the global economy, anti-globalisation sentiments and the widening disparities between and within nations are some of the sources of international instability that will continue in 2021.

At the geopolitical level tensions arising from the dilution of US dominance of the global order, the rise of China and its expansionist policies in the South China Sea and the general sharpening differences with the US under Trump, the demonization of Putin’s Russia and resistance of Russia to western pressure will continue  to mark the international scene in 2021.

The disarray in Europe with Brexit and differences over issues of democracy and human rights between western European and east and central European countries, as well as the consequences  Trump’s hectoring of Europe, especially Germany, over trade and defense issues that caused strains in the transatlantic alliance, are realities that will need grappling in 2021.

The churn in the Middle East will continue with the mounting Iran-Saudi Arabia rivalry rooted in Iran’s regional ambitions and the Shia-Sunni conflict, the fall out of Turkey under President Erdogan becoming increasingly Islamic, seeking the leadership of the Islamic world and reviving its Ottoman era ambitions that include military interventions in the Middle East and the Mediterranean. The loss of Arab support for the Palestinian cause, as well as that of the US leading to a dramatic breakthrough in ties between Israel and key Gulf and North African monarchies, are developments that will continue to shape Middle East politics in 2021.

To believe that multilateralism was a reality until America First under Trump eroded it would be wrong. On security issues in particular the UN Security Council has been ineffective since long. With greater antagonism between US on the one hand and Russia and China on the other, the outlook for 2021in terms of collective decision making to address global security issues remains poor. On the other hand, with the US joining the Paris Climate Change Agreement and the World Health Organization (as well as willingness to re-enter the JCPOA with Iran) can be viewed as positive developments for the working of these international agreements and bodies, but that will not change the underlying disregard of multilateralism by the US when it does not suit its interests.

The international trade architecture has been coming under strain for some time primarily because of US frustrations with the WTO that led it to emasculate its dispute settlement body by obstructing nominations to its panel. Added to this are accusations against China’s unfair trade practices in violation of the WTO rules that have led to a trade war, and the emergence of regional free trade arrangements that have diluted the WTO architecture. The developing consensus on the need for WTO reforms will be on the agenda in 2021.

The sharpening of US-China trade differences over trade have now expanded to China’s access to critical technologies, the calls for decoupling from the Chinese economy in critical areas by the West and India as well, even if is slow, will be realities that will cause strains in the management of the global economy, already under stress because of the Covid pandemic.

The ratification of the EU-China Comprehensive Agreement on Investment may run into trouble because of growing reservations about Chinese policies towards Europe, including its 17+1 arrangement that includes several EU countries and the Balkan states, that are seen as undermining European unity. The new US administration is reaching out to Europe to forge a joint approach towards China on trade technology and investment issues. Progress in this regard will begin to shape the relations between the West and China in 2021, depending on how the transatlantic consensus proceeds. China’ of course, will make efforts to keep US and Europe divided as far as possible with its economic levers. 5G issues, besides cybersecurity, will be a significant part of western efforts to oust Huawei from telecommunication networks as the Chinese company has technological lead in this area, which raises security concerns.

Transatlantic ties, strained by Trump’s policies, will certainly begin to improve in 2021, but divisive issues remain. The extraterritorial application of US laws is one such, putting Europe in a position where it cannot pursue its interests independently of the US, as, for example, in the case of US sanctions against Iran. This has fuelled sentiment in Europe, especially in France in favor of Europe’s strategic autonomy. As part of the anti-Russian reflexes of the Biden Administration, efforts to strengthen NATO will be made. On data protection issues, including privacy, tax issues relating to the operations of US Social Media giants, there will be US-Europe tussles. These will , however, go beyond the two, as in the case of Australia. India too is grappling with regulatory issues relating to the operations of these US controlled tech giants.

On Iran, despite the Biden Administration’s willingness to return to the JCPOA, the outlook is unclear because of Iranian demands for the lifting of sanctions in advance, the influence of the powerful Jewish lobby on Washington’s Middle East policies that might touch the core interests of Israel, and the changed political landscape in the Middle East.

The outlook on US-Russia ties remains somber. The anti-Russian reflexes of the Biden Administration will play out in 2021 to the detriment of bilateral ties as well as EU-Russia ties. Even though the arms control architecture has been spared a final blow with the extension of the START Treaty, US pressure on Russia will increase, with the EU also now considering additional sanctions on Russia after the Navalny episode. This policy of applying sanctions unilaterally by the West which is contrary to international law - now emulated by China- risks getting more steam with the new Democratic administration and its focus on human rights. Geo-politically, the short sightedness of US-Europe in refusing to see how their Russia policy is self-defeating and only limits their capacity to meet the China challenge is baffling.

Despite voices in US think tank circles and Wall Street to accommodate China and pursue a policy of competitive co-existence, 2021 is likely to see continuing tensions in US-China ties. The Biden Administration has been prompt to signal its commitment to the security of its East Asian allies and its readiness to resist any further Chinese encroachment in the South China Sea. It has promptly undertaken Freedom of Navigation operations, sent in carrier groups into the area, and raised the level of its political treatment of Taiwan and underlined its defense obligations to it. It has raised the pitch on the violation of of human rights of the Uighurs and invited the head of the Tibetan government in exile to the White House. All these initiatives are seen as serious provocations by China. Biden has spoken about the need to engage China on Climate Change and health issues but developing a middle course on China will be difficult for him in view of the depth of antagonism towards China in the US Congress and public opinion in general. President Xi Jinping is now widely regarded as an imperious, assertive figure determined to expand China’s ambitions that are seen as hegemonic, The July 1, 2021 centenary celebrations of the Communist Party of China will be an occasion for the Chinese leader to unveil his plans, ambitions and world view, and this will shape more the international thinking about his country.

2021 should see a strengthening of the Quad, which has already met at Foreign Minister level in February. US efforts to organize a virtual Quad summit could meet fruition this year. The Indo-Pacific concept will retain its maritime security dimension, with efforts to assure ASEAN of its centrality in developing an Asian regional security architecture while, at the same time, involving Indonesia to back the concept. India will continue to reason with Russia about the salience of this concept and the Quad for India’s maritime security in view of Moscow’s reservations.

India will be holding the BRICS summit in 2021. With Chinese aggression against India in Ladakh, India’s earlier policy of finding common ground with China despite serious border differences has run its course. Yet, the India-Russia bilateral equation is strengthened through platforms such as BRICS, SCO and RIC (Russia, India, China dialogue). India will continue to build stronger understandings with Russia in 2021, with the missed annual summit scheduled for 2020 taking place in 2021. Defense and energy ties with Russia, apart from consolidating larger geopolitical understandings ,will continue to be given priority attention.

India will continue to focus on the responsibility of the international community bilaterally, regionally and internationally to deal with the challenge of terrorism facing the international community. The change in thinking in the Gulf monarchies such as UAE and Saudi Arabia on Islamic extremism should contribute to this combat. However,  the situation in Afghanistan, with the prospect of the Taliban gaining power in that country on the back of continuing terrorist violence against its own people and the reported presence of ISIS elements in the country will be a source of regional and international concerns.

Climate Change issues will be in focus in 2021, with the COP 26 scheduled in November 2021 in the UK. America’s adherence to the Paris Agreement and Biden’s personal commitment to Climate Change issues will see a more determined effort to push the agenda, with emphasis on countries making commitments for reaching the goal of a carbon free economy by a set date. China has announced 2060 as that date, and the EU and the UK have committed to 2050. America has announced a carbon pollution free power sector by 2035 and net zero emissions by 2050. India will be pressed to announce a date. Russia has not announced a date as yet. The negotiations will not be easy as countries like India, while announcing that they have met their NDC targets, will raise the issue of climate justice and that of the developed countries meeting their financial commitments.

The Covid pandemic has disrupted the global society as a whole. With new waves and mutations in some countries, the challenge is far from over. Countries at large are facing economic recession and their focus in 2021 will be inward looking. However, a strong multilateral effort is need to address the consequences of the pandemic, but it is absent. There has been national competition for developing vaccines; the issue of equitable availability of vaccines at affordable prices is paramount. International solidarity in this regard will be tested in 2021, especially with the WHO embroiled in a controversy over its perceived manipulation by China. The revival of the global economy will be major challenge in 2021. This is also connected to the achievement of SDGs by the UN membership.

The G7 has become obsolete but it is meeting in the UK in June this year. It can at best formulate an agenda for the western economies with some international impact, but will have limited relevance in terms of a wider international effort to address the current international issues. The scheduled G20 meeting in October in Rome will be more meaningful. In a different context, that of meeting the challenge of authoritarian regimes such as China, the 5G and critical supply chains issues, the UK Prime Minister has launched the idea of  the G7 expanded to a D10, a group of democratic countries with the inclusion of India, South Korea and Australia. Biden has in mind a Summit for Democracy. How much this idea will take shape in 2021 will need watching.