NASA Launched A Mission To Jupiter 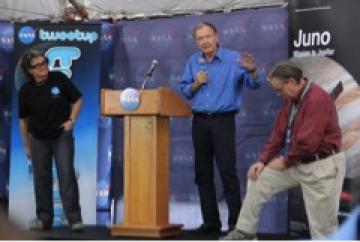 Tobias Owen: «Jupiter is a contribution to human knowledge and experience, in the same way that listening to the music of Mozart»

Question: Dear Dr. Owen, thank you very much for agreeing to give this interview and answer our questions. Space exploration today is a prestige for leading countries in the world, it is their policy, but it is also their necessity. International collaboration in space research covers a whole spectrum of issues: from ecological security to planetary quarantine and signals of the global time system. The Juno mission is being executed in the context of Solar System exploration. What is the international importance of this project? What possibilities it offers for international collaboration?

Dr.Owen: 1. From the first time humans looked at the star-spangled night skies they wondered if there was some connection between those stars and  and their own existence. The search for an answer gave birth to almost all the religions on our planet, it has influenced art, music and poetry, it has been a stimulus for the development of science. These are the deeper reasons explaining our visits to the   planets.   The exploration of these distant worlds is helping us understand our connection with the cosmos.

International collaboration is encouraged. Those  of us who engage in planetary missions see this collaboration as a means for promoting peace among nations. In the case of Juno, we have a strong collaboration with Italy and the participation of several other countries.

Question: The age of globalization is marked by the international collaboration in the studies of oceans, Arctic, space. The declared goals of these research are peaceful. Although space research includes also military aspect. How about Juno?

Dr.Owen: 2. our Juno project and all of the planetary exploration projects are only carried our for peaceful purposes. Some of the satellites orbiting the Earth are used for military communications, just as some airplanes are used to fight wars. But there are no military missions to the planets.   We are living through the first time in the history of the Earth that there have been 60 years of peace in Northern Europe.

It is probable that the launch of Sputnik and the subsequent exploration of space has influenced this period of peace. I like to call it the  "pax sputnika".

Question: The study of Jupiter has as its goal to obtain more complete information about the role of the biggest planet in the Solar System. What can it contribute to the human civilization?

Dr.Owen: 3. It is a contribution to human knowledge and experience, in the same way that climbing Mount Everest, exploring Antarctica or listening to the music of Mozart is a contribution to the human experience, despite the fact that none of these activities has any practical value. Going to Jupiter is a way for humans to learn about the wonders of the Solar System even though there are no humans on the spacecraft.

Jupiter itself has acted as a friendly giant, protecting the Earth from numerous collisions of comets.

It flings some out of the solar system and swallows others.

Question: One can understand that the project appeared in the NASA program of space exploration long before August  5, 2011. How long did it take to put it together? When did it start and how? Give us a little bit of history please.

Dr.Owen: 4. This mission follows a sequence of other missions to Jupiter. The first two flew past Jupiter and went on to other planets. They overwhelmed us with the dynamic beauties and scientific value of this giant planet.   The third mission entered an equatorial orbit  around Jupiter and sent a probe into the planet's atmosphere. The probe made many outstanding measurements but did not go deep enough to measure the highly important abundance of water. This one, Juno, will fly around Jupiter in a polar orbit.   It will study Jupiter's gravity to tell us about the structure of the planet's interior,  its magnetic field and its composition. Using a microwave antenna, Juno will search for water deep below the clouds we can see in pictures of the planet.

10 years passed from the time the first idea for this mission was born until the launch of the spacecraft. The idea for Juno began with a conversation at the JPL cafeteria between Scott Bolton and myself . Bolton had some excellent ideas about measuring the charged particles in the magnetic field of Jupiter and was looking for other ideas for such a mission. I had wanted to look for water in the deep atmosphere of this planet ever since the probe mission failed to find it.  We realized that we could put these two experiments together into one mission. We then wrote a proposal for Juno andScott assembled a team of scientists to bring this mission to NASA for approval. Scott became the principal Investigator and chief of the mission.

Question: What does this mission mean to you personally? Why Jupiter? When was your dream born? And what is your personal contribution into the mission?

Dr.Owen: 5. As a child of 10 I was fascinated by the constellations of stars and the planets moving among them in the dark skies of Santa Fe New Mexico. When I was 12 years old I made a  15 cm diameter telescope. The first planet I looked at was Jupiter. That was 63 years ago. At that time I could not even dream that I would be the member of a team sending a mission there one day.  There were not even any rockets. Why Jupiter? It  is the largest planet in the Solar System. It could contain all the other planets and still have room left over. Becauseof its immense size Jupiter retains a memory of the formation of the Solar System. So exploring Jupiter for an astronomer is like discovering ancient cave dwellings for an archeologist. It is an opportunity for cosmic time travel.The piece of the mission that I am especially interested in is water because water carries oxygen on Jupiter and oxygen is the missing piece in the puzzle of understanding the origin of this gigantic planet..  We cannot understand the formation of the Solar System without understanding Jupiter.

Question: The goals of the mission have been described in general terms by all leading media agencies. Can you give the readers of our journal some details about the data that will be obtained? What information can you get from this data? Is there a plan to continue this study by sending other missions to Jupiter?

Dr.Owen: 6. We will learn the structure of Jupiter's interior, whether it has a central core of dense material b10 times bigger than Earth,the size and composition of its huge magnetosphere, and the way it produces huge, bright auroras and the composition of the planet itself. One thing we are going to do with the data is to use it to help us determine the characteristics of the super-giant planets with orbits smaller than Mercury's that are being discovered around other stars. At present we know of over 200 of them. But we have not yet found any like Jupiter. Can Jupiter tell us why? Our present, limited understanding of these planets that are sometimes 10 times the size of Jupiter makes us think  that there is something special about our Solar System. This could mean that it is unlikely that there are other planets like Earth. And that is one more reason we want to understand Jupiter very well.  Just now that there are no other missions to Jupiter planned. The next missionI will join  goes to Mars,  another fascinating world.

Question: Can you throw some light on the logistics of interaction with the spacecraft for the duration of the mission? What will be done while it is flying to Jupiter and then works on its orbit?

Dr.Owen: 7. It will take 5 years for the Juno spacecraft to get to Jupiter. During that time and while it is at Jupiter we will communicate with it and it will send data back to us using radio signals. The probe itself will work at Jupiter for a month. On its journey to Jupiter it it will investigate thje huge space between us and the other planets.  Even though they travel at the speed of light it will take 45 minutes for our commands  to go from the Earth to Jupiter and another 45 minutes for the probe to send us information about its discoveries.

Question: How necessary it was for the Italian space agency to participate in this mission? And also for France, Belgium and Denmark? How do you evaluate their contribution? Is there any chance for Russia to participate? If yes, then how?

Dr.Owen: 8. In this age all big space missions include international collaboration. Large missions like Cassini-Huygens to the Saturn system are too expensive for  a single country to carry them out by itself.   Italians contributed a very important instrument and essential  electronics to mission Juno. Other countries also helped but on a smaller scale.  Russians have collaborated in other international missions. They could have supplied an instrument to our mission as well, but at the time our spacecraft was being built there were no suitable Russian instruments.