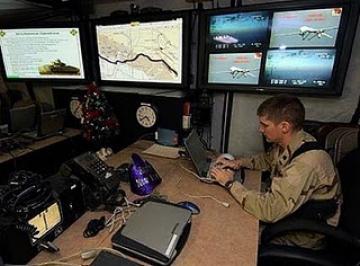 Analysis of international political and military situation and the information shows that in the modern world, several developed countries (USA, UK, France, Germany, India and China) are actively increasing their efforts to achieve global dominance in the information field, which leads to strengthening the entire spectrum of strategic threats for security of Russian Federation.

The most active role in this process is played by the United States and its allies. According to the concept of "information superiority", reflected in the document about military strategy development of U.S. "One Perspective - 2020", the advantage in the information field is one of the key factors in the successful conduct of hostilities.

To achieve the objectives of the concept, in 2009, the Ministry of cybersecurity was established, there was substantially increased the size of the financing of activities aimed at development of the system of information confrontation of the United States, the improvement of information weapons, forms, methods and ways of its application, as well as conducting offensive information and psychological operations (IPO) in various regions of the world. Such as:

- a region called the "Greater Middle East", especially in Libya, with the active involvement the units of "psychological war" from the countries of Western Europe as well;

- in Syria one can see the first phase of an IPO in order to change the existing regime in the country, the next ones are Iran, North Korea and Belarus.

In this context, the following new threats to security of the Russian Federation have emerged:

greater control over the international information space and, above all, over telecommunications systems;

formation of a unified information infrastructure of NATO to meet modern requirements of battle management and to enhance the degree of readiness of the armed forces of countries - participants of the block;

imposition of economic sanctions against Russia, based on her accusations in the supply of weapons to countries ranked by the United States to "rogue states" (Syria, Iran, North Korea and Belarus);

imposition on the leadership of some European countries political decisions that benefit mainly the U.S. (eg, the need for participation in the aggression against Afghanistan, Iraq, Libya).

Significant role in the implementation of plans of the information confrontation is given by the U.S. leadership to the manipulation of public information through the media on a planetary scale.

In particular, a direct threat to Russian security is created by such actions as:

justification of ways and terms of possible disintegration of the Russian Federation on the autonomous territorial entities with increased autonomy of subjects and regions of Russia (Kaliningrad region, North Caucasus, Volga region, Siberia, Far East, etc.);

the enhanced formation of global public opinion on the unconstructive position of Russia in a territorial dispute with Japan over the issue of the Southern Kuril Islands;

spreading misinformation about reducing the role of Russia in the international arena as a country, not predictable in foreign affairs, and not self-sufficient in solving challenges of domestic economics and security of the individual and society;

disorientation of the world community's ability to guide the CIS countries to resolve political and economic problems without close cooperation with the United States;

making a split in Russia's relations with other CIS countries in order to reorient them to work more closely with the West.

Further integration of the Russian Federation in the global information space leads to the growth of one more new kind of threat, the threat of international cyber-terrorism that is the use by terrorists and criminal groups in the global scale of the advanced information and telecommunications technologies to conduct terrorist operations against the critical elements of the national information infrastructure.

It should also be emphasized that the threat to national security of Russia in some cases comes from the activity of electronic media in the fight against terrorism. The most convincing proof of this provision has been in the conduct of terrorist acts in Russia: in particular the capture of the school in Beslan, in the shopping center on Dubrovka in Moscow, an attempt to capture city of Nalchik in Kabardino-Balkaria, explosions in the Moscow metro and the airport "Domodedovo".

To parry threats to national security in the information sphere in the Russian Federation the government policy in the field of information warfare is formed and put into practice.

Problematic areas of state policy in the field of information confrontation arising from national interests are the following:

a) Providing spiritual renewal of Russia;

b) maintaining and strengthening the moral values of society, the traditions of patriotism and humanism, cultural and scientific potential of the country;

c) informational support of public policy of the Russian Federation.

Their implementation is as follows:

- the need for a meaningful definition of the political ideas of solving the problem of providing spiritual renewal of Russia;

- to maintain and strengthen the moral values of society, the traditions of patriotism and humanism, cultural and scientific potential, which consists in the fact that the consolidation of society, the mobilization of its spiritual and intellectual capacity to deal with urgent political, economic and social objectives, need to build a universal system of values, including the ideological rationale of strategic, long-term development goals, taking into account historical experience, clear understanding of global issues, perceptions of opportunities and resources of Russia, mechanisms and methods of their rational use.

Implementation of this direction organizationally should be in the form of state support programs of patriotic education of young people (example: participation in 2010-2011 University students in Russia and CIS countries in the competition of works on the theme "Science and Education against terror");

- a modernization of information management of public policy,  which must be realized by strengthening the coordination bases, improving the interaction of all the agencies that have information resources, the state planning of the work, carrying on a systematic basis of information operations (action, stock) and adjustment of activities of the federal government and organizations included in the state diagram information confrontation;

- information support of the public policy of the Russian Federation should be conducted continuously, both in its general priorities, set out in the Principles of State Policy of Russian Federation in the field of information confrontation, and, in particular, on the  geopolitical issues to be resolved at the key strategic directions;

- in order to justify the appearance of an advanced information confrontation, and based on the requirements of the constitutional principle of centralization of management of the  issues of security at the state level it is necessary to establish a permanent coordinating body with the authority of the operational management of ministries and departments to solve their problems of information warfare. An example of how this issue has been resolved by the major world powers is available to any copyrighted material on the Web sites: HYPERLINK "http://www.dimlevich.com/"www.dimlevich.com or the journal “International affairs” of the Ministry of Foreign Affairs, under the heading "Experts" at: HYPERLINK "http://www.interaffairs.ru/experts.php"http://www.interaffairs.ru/experts.php

An important activity of the state is prioritizing the development of information technology and new elements, providing a way out of technological dependence of Russia on the foreign countries in the field of informatics.

Attempts to introduce domestic technological innovation and breakthrough results in the field of informatics causes the active opposition of the world's leading states, primarily the U.S., which seeks by all means to preserve their monopoly on dominance in the creation and distribution of computer equipment, software and communications. It complicates the problem of overcoming the technological backwardness of Russia in the field of informatics.

- the existing legal framework of providing comprehensive information confrontation in all components of the information space, both within Russia and abroad requires the improvement.

- state planning in the field of information confrontation of Russia in time of peace should be made by the permanent coordination body under the President of the Russian Federation.

- in the near future, one should  develop and implement a political mechanism of state ensuring the security of the system of forming public opinion in the Russian Federation and countering the destructive internal and external influence on the social environment, the spiritual realm, outlook and mentality of Russian citizens.

As an example, the information and propagandistic campaign (IPC), brilliantly conducted by the U.S. administration in September 2001 both domestically and abroad, can be recalled. As a result of IPC, its participants, and they are the most of the world, including Russia, have joined and are actively involved, with constant monitoring by the U.S. administration in the fight against international terrorism.

As a result, after the tragedy of 09/11/01, in the United States, there has not been a single case of attack. In America and in European countries there was created in a systematic way, with state support, a permanent set of preventive measures for early detection and prevention of terrorist attacks, which is actively participated by a society (as represented by various social organizations) and by citizens of these states as well.

In the nearest "five years", Russia is to create such an effective (but not now acting effectively) system to counter terrorism. Both society and individual citizens must become the participants of such a system not merely in words but in deeds.

Otherwise, it can lead to the disappearance of such a state as the RUSSIAN FEDERATION from the political map of the world.

In particular, the new U.S. Trailblazer program is aimed at achieving this goal to develop advanced means of interception and automatic monitoring of international communications in real time.