“National Review”: ‘Will anyone signing the checks ask where the money goes in Ukraine?’ 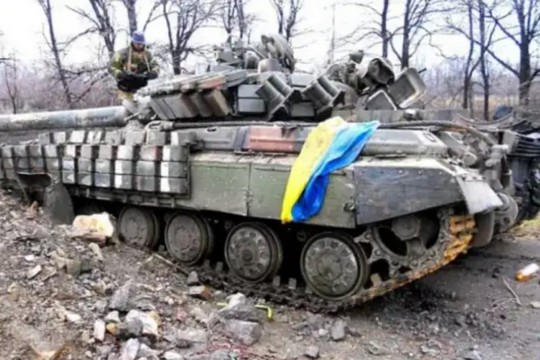 ‘Your money is not charity,” Volodymyr Zelensky told a joint session of the U.S. Congress a few weeks ago. “It is an investment in global security and democracy that we handle in the most responsible way.” And many conservative hawks, hoping to hold back the rising tide of skepticism among Republicans, have echoed this line. After the speech, Representative Dan Crenshaw called the idea of ending aid to Ukraine “absurd” and said America had “made a pretty good investment here,” - writes “National Review”.

Crippling a rival military is only worthwhile when you have a strategic reason for doing so, and we conspicuously lack one. The NATO alliance’s duties have been radically expanded with no radical expansion in the share of the alliance’s burdens shouldered by Europe.

Ukraine’s ultra-nationalist project is at odds with the democratic and liberal-internationalist values that are used to sell the conflict abroad.

The conflict’s financial and moral costs to the U.S. have been growing for nearly a decade, and taking on Ukraine as a permanent dependent will grow them even more.

The arc of the conflict is just as likely to encourage as to discourage Xi in his pursuit of Taiwan, given the ways in which our enmeshment in Europe will deplete our attention, resources, and will to be the world’s cop. China may be delighted to see the U.S. arming Ukraine rather than Taiwan, and pushing the number of American troops in Europe above 100,000.

It may notice that the U.S. is now discussing giving 30-year-old Bradley fighting vehicles to Ukraine precisely because it is running out of weapons for the Ukrainians. It may also notice that the U.S. is entering a weapons supply-chain bottleneck. U.S. planners are already noticing that our weapons industry cannot keep up with the artillery demands of the war in Ukraine. China may notice that we are investing all these resources and attention in Europe even as our national-security strategy disclaims the goal of being able to fight two major wars at once. Which factor will be weighing on China’s calculation more, the depth of conviction of our think tankers or our depleted stocks of weapons?

Far from strengthening the alliance, the Ukraine conflict has revealed a kind of derangement within NATO and within our thinking about NATO. The evidence that the alliance has been strengthened is weak.

NATO expansionists have cheered as Finland and Sweden both sought membership in the alliance in response to Russia’s invasion. At first glance, these are far more serious candidates for membership, with greater resources and a more suitable domestic political culture to offer NATO, than recent entrants to the alliance such as North Macedonia. After things are cleared up with Turkey and Hungary, their membership is already pronounced a done deal.

The problem is that Sweden is making this deal with a promise to dramatically increase its defense spending, and, like Germany, it is deferring that promise, offering to reach the 2 percent of GDP target by the latter half of this decade, after the next election. For NATO expansionists, the headline out of Finland is that the country has committed to a 70 percent increase in defense spending.

But skeptics should note that it’s a one-time commitment, and that Finland brings with it a giant liability: It has 900 miles of border with Russia, the integrity of which will now be NATO’s responsibility.

Meanwhile, the leader of the alliance’s other big European power, French president Emmanuel Macron — who was hailed as a hero of the liberal world order during the Trump era — is routinely floating ideas of a European Union-led security pact with Russia that does not include the United States, and warning that the NATO alliance is fracturing.

Ukraine’s corruption will matter a great deal at the end of this war. The war has wrecked the country’s economy. Estimates of reconstruction costs have risen to $750 billion, and will continue to rise …

The thought of shoveling nearly five times Ukraine’s pre-war GDP through its corrupted institutions should make anyone wince. Will anyone signing the checks ask where the money goes? The Pandora Papers revealed some of Zelensky’s offshore holdings and financial relationships with others in his government, denting his popularity in Ukraine, though barely registering as a blip in the more tightly wound press of the West.

The basic problems with U.S. involvement in the region haven’t changed. Ukraine is peripheral to U.S. interests, and the depth of the American people’s commitment to its defense is shallow, which is why war hawks constantly minimize the current financial costs and don’t bother talking about the long-term liabilities of making Ukraine a financial and security dependent of the West.

But what we’ve signed up for by backing Ukraine is a massive, nearly utopian project with obvious, foreseeable risks and potentially ruinous costs. It’s time we started thinking about those dangers more seriously, - stresses “National Review”.