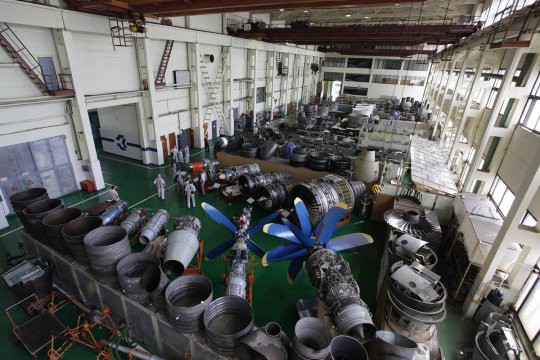 The political life in Ukraine is as dynamic as ever. The need to “repulse the aggression” is being used as a cover to settle a set of economic issues, which do not always incorporate the officially declared agenda.

As became known at the beginning of November, the Ukrainian authorities have resolved to nationalize a number of enterprises that are owned by Ukrainian oligarchs, including “Ukrnafta”, “Ukrtatnafta”, “Motor Sich”, “AvtoKrAZ”, Zaporozhtransformator”, their shares will now belong to the state. The businesses in question are the property of different owners, and operate in different sectors of the economy. In the words of Prime Minister Denis Shmygal, the purpose of nationalization is to switch to military needs, “businesses must operate 24 hours a day to meet the needs of the nation”.[i] According to Alexei Danilov, who heads Ukraine’s National Security and Defense Council, the nationalized assets have been pronounced military property, have been placed at the disposal of the Ukrainian Defense Ministry, and can be returned to their owners after the state of martial law is over.

The list of the enterprises is not accidental for several reasons:

- “Ukrnafta” and “Ukrtatnafta” are not only associated with Ihor Kolomoyskyi (42% of “Ukrnafta” shares) and his partner, Gennady Bogolyubsky (60% of “Ukrtatnafta”), but are also enterprises of the fuel sector with the corresponding infrastructure: an oil base, a network of filling stations (the nationalized “Ukrnafta” has more than 500 filling stations out of 1600, owned by Kolomoyskyi), and also the Kremenchuk Oil Refinery, close to the military operations zone.

- “Motor Sich” does not only belong to Viacheslav Boguslaev, who makes no secret of his pro-Russian views, but is an enterprise which boasts unique aviation technologies, a trigger for a conflict between Ukraine and China, not without the active and overt participation of the USA on the side of Kyiv.

- “AvtoKrAZ” is not only an asset of businessman Konstantin Zhevago, it produces trucks, which, in the conditions of an armed conflict, are manufactured mainly for the Ukrainian army.

- “Zaporozhtransformator” does not only belong to Konstantin Grigorishin, an old-time player on the Ukrainian energy market, but is a vital enterprise, indispensable for the restoration of energy infrastructure.

For Kolomoyskyi this is not the first nationalization – in 2016, under President Pyotr Poroshenko, the state assumed control of a major Ukrainian bank – “Privatbank”. But in  2019, during the last days of Poroshenko’s presidency, following a series of trials, Kolomoyskyi regained the control of the bank and its assets. According to experts, Kolomoyskyi used the nationalization to settle some of the bank’s problems at the expense of the state, including those to do with his commitments and debts, before retrieving control. There are grounds to assume that this time Kolomoyskyi will try “to go into the same river”, to do what he has already done before. The logic could be as follows: in the situation of martial law, energy infrastructure facilities come under missile fire, after this they need to be restored at the expense of the owner, in a situation when all work is focused on military needs, the relationship between the state and the military do not always base on the principle “service first, money after”, in a word, there are huge losses, loans and commitments to the warring state. Hence the logic – let the state use these businesses, let it restore them after missile strikes, and then, we will take them back.

“Motor Sich” has a different story. Its owner faced a lot of harassment from Ukrainian media, several years ago he was able to express an openly pro-Russian position. Over time, as the pressure on Boguslaev intensified, he made attempts to insure himself against the risks of nationalization or a raider seizure and to find new markets for his produce (aircraft engines) after he had lost his main market, when in 2014 Kyiv imposed a unilateral embargo on the supplies of defense produce to Russia. Before that, “Motor Sich” had had a contract on the supply to “Helicopters of Russia” up to 270 engines (annually) for Kamov Ka-31, Kamov Ka-32, Mil Mi-17, Mil Mi-28 etc. One of the options to preserve the business was the bringing in of a Chinese investor. But the deal was blocked under pressure from the USA. China was not a random choice – there was a contract on the supply of engines to China, which was pursued in 2016 – 2018, but under pressure from the USA, it was not implemented. After that, the Chinese investors in the face of Skyrizon Aircraft Holdings (owner Wang Ching) resolved to buy the enterprise, so by 2018 “Motor Sich” shareholders included four Chinese companies and one Chinese national. In total, they owned 56% of stock.[ii] The transaction infuriated US top officials. John Bolton, the then National Security Advisor, demanded the return of “Motor Sich” to Kyiv at whatever the cost, while State Secretary Mike Pompeo expressed concern over “the ill-intended investments by China”. Kyiv obeyed, Ukraine’s National Security Service blocked the deal and filed a lawsuit in connection with state treason, while the Shevchenkovsky Court of Kyiv imposed an arrest on 56% of shares. In an attempt to settle the issue, the Chinese investors in 2019 entered into partnership with Ukrainian oligarch Alexander Yaroslavsky (under an agreement reached, he was entitled to 25%+1 shares), but the Ukrainian court slapped a veto on this deal too, while Yaroslavsky was accused of state treason. Apparently, the deal was blocked at the political and economic level. The issue of preventing China from accessing technologies via Ukrainian enterprises was so vital for Washington that President Vladimir Zelensky declared “Motor Sich” a strategic business which can be sold only with the consent of the head of state. This was followed by sanctions early in 2021 against four Chinese companies that were signatories to the deal (blockage of assets, trade restrictions, a ban on the export of capital). Personal sanctions were imposed against key Skyrizon investor from China, Wang Ching.

In October this year, “Motor Sich” owner Boguslaev was arrested on suspicion of treason against the state, and early in November, it became clear that the move was part of preparations for nationalization.

The Chinese investors continue to fight for the enterprise. In November 2021, Beijing Skyrizon reported that it would seek more than 4.5 billion dollars in compensation for damages through the Hague court. The company said in its statement that “as a result of unfair treatment of Chinese investors by Ukrainian officials in the past five years and consistent use of illegal measures, Chinese investors sustained substantial losses, both in Ukraine, and in China”.[iii] After the nationalization of the enterprise, “Motor Sich”’s Chinese investor representative Wang Ching released a statement which was published by Beijing Skyrizon: “We strongly oppose the shameless behavior of the state of  Ukraine in which it politicized normal business conduct, forcefully nationalized PJSC “Motor Sich” and unjustifiable infringement of the lawful rights and interests of Chinese investors. (…) We will continue to maintain regular ties with all parties concerned in different ways, and we will never give up fighting for our rights in a legitimate way”. In addition, lawyer Liu Zhengjun  of the Beijing Office of the Dahan Company said: “As for the nationalization of “Motor Sich” and assets of Beijing Skyrizon for national security considerations, it is illegal, it violates Article 4 of the Chinese-Ukrainian investment agreement under which one party to the deal must not take such steps as expropriation or nationalization in relation to the other party’s investors”.[iv]

The conclusions which can be made are as follows. What will nationalization result in for Kolomoyskyi’s enterprises is more or less clear. “Motor Sich” will not go to the Chinese, it will be used either for repairing military aircraft and the production of engines and spare parts, or will be ‘killed’ on account of becoming unnecessary as a result of losses of this machinery in military operations. The machinery currently used by Ukrainian armed forces was developed in the Soviet Union and then Russia, the West has not supplied Ukraine with either a war plane or helicopter. Nationalization of the enterprise is paving the way for a strike against it as part of the Special Military Operation agenda – demilitarization. What is in store for the other enterprises is unclear. What can be considered the answer  to this question is a statement by Ukrainian Energy Minister German Galushchenko, who said that the Ukrainian authorities see to it that  private companies are focused on supporting national army and economy: “We need to survive… this is our common agenda. If the government catches someone playing other games, which do not serve common purposes, of course, I am sure, certain decisions will be taken in connection with this".[v] This means that nationalization of enterprises owned by Ukrainian oligarchs may continue. According to Galushchenko, confiscation of assets cannot be seen as nationalization, as it is a temporary measure.

Ukraine’s National Security Council Secretary Alexei Danilov has expressed strong doubts about the possibility of retrieving nationalized assets: «This will depend on how these assets affect the condition in which our country finds itself».[vi]

As we can see, Ukraine is trying to address the issues of its oligarchs and of confrontation between the USA and China over the access to technologies in a rather specific way, by taking measures to reorient its economy to military purposes. These processes incorporate the so-called “deoligarchization”, which was forced on Kyiv by the West, a fairly easy thing to do these days.

But the Ukrainian oligarchs, the Kyiv regime, and their American patrons should bear in mind that all businesses nationalized for Ukrainian army needs may become targets for possible strikes as part of the Special Military Operation agenda – demilitarization of Ukraine.