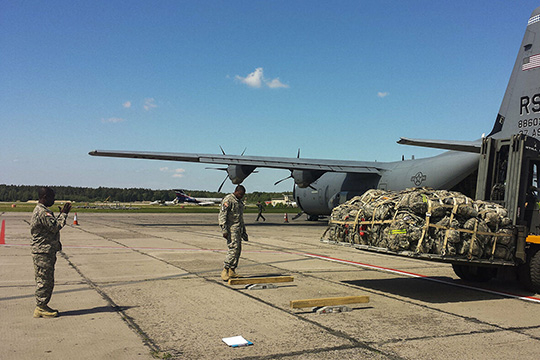 NATO Secretary General Jens Stoltenberg said that "NATO countries have invested additional funds in the purchase of air defense systems and fighters to contain Russia," RBC reported. Meanwhile, almost all members of the Western defense alliance are facing a second wave of the COVID-19 pandemic. Against the background of new threats, the agenda of the North Atlantic Alliance looks less and less adequate and increasingly outdated.

As of the end of October, six NATO countries make the top ten world nations with the largest number of confirmed cases of coronavirus infection. The pandemic poses an immediate threat to the life and wellbeing of the people living in the countries – members of the organization, which for the past seven decades has called itself a key element of Western security. At the same time, in June, Jens Stoltenberg called the preparation of an operational plan of action in the event of a second wave of the epidemic "a litmus test of the alliance’s reliability."

Signs of a growing crisis within NATO began to emerge already 30 years ago, in the wake of the collapse of the Warsaw Pact. All of a sudden, the Alliance lost both key elements that had long justified its existence - the enemy and mission. Indeed, by the close of the 1990s, the very cornerstone of "collective defense" had actually become history. The degree of degradation of NATO’s military component was particularly evident after September 11, 2001. Launching its anti-terrorist campaign in Afghanistan, the United States almost demonstrably made do without using much of NATO’s military potential. Germany and France then spoke out against the invasion of Iraq.

Apart from enlargement – its only formal success – NATO has demonstrated either the ineptness or inability of its numerous structures to respond to the challenges of our time, primarily posed by organized crime and international terrorism. Officially touted as a “protector of Europe,” the alliance has been of little help to Europeans when an influx of hundreds of thousands of refugees left the European Union teetering precariously on the verge of a split, if not total collapse.

The financial crisis of 2007-2009 showed the West once again that the main threats to its stability are of a non-military nature. The scope of negative socio-economic consequences made Washington increasingly doubtful about the need to maintain the current level of America's military obligations to Europe. Donald Trump’s arrival in the White House reflected the growing public concern in the United States about the critical overextension of the country’s resources. Even though Trump has since ramped up Washington’s military presence in Europe to the maximum level since the end of the Cold War, in practice, the issue of America’s participation in NATO’s affairs has become the main threat to the existence not only of this organization, but of the entire current model of the “West” as a whole.

Just a few days ago, President Trump's former national security adviser, John Bolton, suggested that if the current occupant of the White House is re-elected for a new term, the United States may exit NATO. He added that this would bring about the collapse of the alliance – an assumption that doesn’t look very surprising, given the following factors.

First, the pandemic has thrown in doubt NATO's capability as a military organization. The Defender 2020 wargames, slated for March, were the main “victim” of the coronavirus pandemic. The exercises – one of NATO’s biggest since 1991 – were supposed to test the United States’ ability to speedily move to the European theater a whole division of 20,000 men and deploy them in close vicinity of the Russian border. Much to the Western observers’ disappointment, however, the epidemic easily nixed those plans, just like most of other such drills.

Simultaneously, the Europeans started downsizing their participation in NATO’s overseas missions, explaining this by the need to concentrate all resources on battling COVID-19. And also out of fear that troops stationed in regions with poor sanitary conditions could spread the disease elsewhere.  The pandemic necessitates a large-scale readjustment of government spending in NATO member countries, including within their defense budgets.  The released funds were channeled to the implementation of quarantine measures, mobilization of military doctors, internal security measures and strengthening border protection.

Second, amid the ongoing coronavirus crisis, the futility of allied expectations regarding Washington's readiness and ability to assume its leadership role has become "painfully obvious." Rather than spearheading the fight against the pandemic, at least in the West, the United States imposed a unilateral ban on the entry of people from Europe, its "closest allies." Moreover, Washington "shamelessly” tried to acquire for itself and itself only a potentially effective vaccine against the coronavirus, being developed in Germany. [i]

And finally, for NATO, the current crisis differs from all previous ones in that the dynamics of the pandemic are "unpredictable." In addition, the bloc’s European flank has already been severely weakened by the crises of the past decade. In the United States, the ongoing presidential election is putting to the hard test what Henry Kissinger described as "public confidence in the Americans’ ability to govern themselves."

The pandemic also demonstrated the unconditional priority of sovereign states, both in terms of legitimacy and of resources that can be used to tackle a catastrophic security threat. The EU has been trying to agree a package of recovery measures for several months now. In an effort to shore up the economy, spending on common foreign and security policies, including programs of wider military interaction between the EU countries has been cut. In such circumstances, NATO will find it extremely hard to secure the Europeans’ agreement to increase their defense spending by another notch.

Meanwhile, the uneven burden of military spending has become a major sticking point souring relations between the NATO member states.  Trump is firmly on course to “monetize” America’s allies. However, the Europeans fear that bigger military outlays will necessitate an increase in public debt or higher taxes, which will hardly sit well with the populace. This is also undermining Europe’s economic competitiveness. Thus, Trump's policies weaken the position of Europeans in the global competition. Washington, for its part, sees any delays in hiking defense outlays as a deliberate policy of the Europeans, who consider the United States as a reliable guarantor of their security.

In the broader geopolitical context, during its last year’s summit in London, NATO for the first time included China in the list of its strategic priorities.  Now, the coronavirus epidemic has demonstrated a clear watershed between countries, including China, which have been able to quickly and effectively respond to the epidemic by mobilizing a well-trained military and civilian state apparatus to fight the coronavirus, "and the  Western countries that were unprepared," as the former French Secretary of State for European Affairs, Pierre Lellouche, pointed out in an interview with Le Figaro.

Right now, Beijing is clearly better at keeping the epidemic under control, than the West. In economic terms, Beijing is also on top of it, boasting the world's largest reserves, significant liquid assets and industrial capacities, which not only can quickly make up for the losses of the recent months, but are also giving a new powerful boost to the expansion of Beijing's geopolitical presence worldwide... As for Europe and the United States, while repeating as a mantra their resolve to “resist China,” they are becoming economically “weakened,” financially “debt-ladened” [ii] and teetering on the brink of a major crisis that a new shutdown of their economies could provoke. The West is facing a dilemma of which is more important, "guns" or "butter," previously characteristic of the Third World countries.

For all its ambitions as one of the leading centers of global power, NATO’s European wing, “today has become a buffer zone for confrontation between China and the United States.” [iii] Weakened by the coronavirus crisis, Europe has already been forced to cut much of its foreign policy activity down to mere ​​political rhetoric. Chances are that the Europeans may have to “withdraw into themselves” for the entire period of recovery from the humanitarian, financial and economic consequences of the epidemic.

Amid massive failures in healthcare and the economic damage that is simply impossible to assess today, European politicians may find it extremely hard to convince their voters of the need for increased defense spending any time soon. US politicians will find themselves in a similar fix, especially after this year's election campaign, whose incredible political intensity, coupled with the COVID-19 epidemic, has only exacerbated the deep rift between Democrats and Republicans.

It will be even more difficult to justify maintaining NATO’s old political priorities. The changing nature and scale of threats are becoming increasingly evident even to ordinary people. The increased assertiveness of Russia and China has traditionally been presented by many in NATO as “a “challenge” and "growing pressure." However, even in Europe, "threats from Moscow" are now "obvious" only to Poland and the Baltic states, while the rest of Europeans see the situation in a much more realistic light, and are calling for a change of priorities when it comes to ensuring security on NATO’s southern flank.

Meanwhile, Russia, which is allegedly "threatening" NATO, has consistently advocated preserving the INF treaty. On October 26, President Vladimir Putin reiterated his call on NATO to declare a joint "moratorium on the deployment of ground-based intermediate and shorter-range missiles in Europe." The Russian leadership is also working hard coming up with new constructive proposals to preserve the START-3 accord. Finally, Russia has for many years been urging its European neighbors to consider the security of the continent in keeping with the principles of "indivisibility of security" and the equality of all participants.

Overall, the main efforts to tackle both the current coronacrisis and potential threats to the future have little to do with the concerns of a ​​military organization, and even lie outside its realm altogether. In addition, America and Europe are increasingly at odds about the future of NATO. A number of Central and Eastern European countries are increasingly relying on closer military-strategic cooperation with the United States. At the same time, some in the American elite already view NATO as almost a possible replacement for the EU as a new "unifier" of the continent. Other experts, however, believe that "the best way to move forward is a reorganization of NATO, where greater burden will be shifted to Europe." [iv]

It must be admitted that the coronavirus crisis has dealt a powerful blow to the reputation of almost all supranational institutions, which may eventually push them into the background of world politics. NATO is no exception here, since its bloated bureaucracy, with its plans for accelerated and costly modernization of the existing weapons systems, clearly contrasts with the goal of strengthening national self-sufficiency and economic autonomy. Therefore, by the time the pandemic is over, the perception of the alliance by its members may have become even more uncertain than it is today.