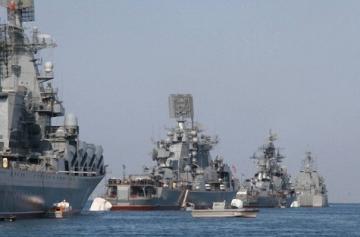 On the 23d of May the naval forces of the US, NATO, South Europe and North Africa launched the maneuvers codenamed Phoenix Express. Politically, the aim is to demonstrate that members of the alliance are ready to join efforts in case anything goes wrong in Libya. As far as the maneuvers themselves are concerned, training is primarily aimed to be ready to land troops no only in Libya but in Syria as well.

Brussels insists that Phoenix Express are routine drills aimed to improve cooperation between the navies of all countries interested in stable security in the Mediterranean. Though it is evident that the main thing about this operation is to share data about the situation at sea and functioning of  the Automated Information System (AIS), as well as chances to carry out 'peacekeeping operation' in the area.

The operation is taking place in full compliance with “Strategic Concept For the Defence and Security of The Members of the NATO'', which says that the alliance should possess a unique set of political and military capacities to cope with all kinds of crises, both in pre- and post-conflict times and manage all situation that could affect security of NATO and its allies.

Taking into account how fast a wave of popular unrest is spreading across the Mediterranean region, Libya, Syria and probably Iran and Algeria will soon become the first areas where NATO`s new Strategic Concept will be put to test.[1] In case of success, the U.S. neo-Conservatives will achieve their aim and step aside from the UN policies.

There are hardly any doubts that Damascus will be the next target for NATO bombings. “I think it would be honest to say that we are going to urge the government of Syria to take responsibility for what`s going on. A timeline of key events shows what we have done there...”- the US Secretary of State Hilary Clinton said and thus admitted the U.S. interference in Syria's crisis.

What Barack Obama has recently said in his 'Arab Spring' speech appears to be giving a new impulse to anti-government protests in Libya and Syria. ''Our signal is quite simple: if you take all responsibility for reforms, you'll get our full support'', Obama said. The announcement made by the White House Chief of Staff that ''Gaddafi is doomed to step down'' can be viewed as a hint that Syrian leader Bashar Assad will be ousted too. At a meeting of foreign ministers in Brussels, the European Union imposed sanctions on Syrian President Bashar Assad, raising pressure on his government to end violence against pro-reform protesters.

However, the situation in North Africa and the Middle East is far more complicated than it is seen from Washington and Brussels. And this is what the International Crisis Group is talking about in its latest report on Libya: “Expectations that time will help the opposition as the regime will soon run out of weapons, fuel and money (or will be toppled in a coup) appear to leave no chances for serious political reforms to take place”.

In view of this NATO has to be flexible and, as NATO Military Committee Chairman Admiral Giampaolo Di Paola put it, ''to have 100 or 1,000 hypothetical scenarios''. Let them be not as many, anyway- one of the scenarios is obviously approved by Washington and Brussels: to send NATO troops to some Arab states and go for a 'Balkan model' there. [2]

Unlike Bosnia and Herzegovina, Kosovo and Macedonia, Libya and Syria have access to sea. In view of this, participants in Phoenix Express maneuvers have as their key task the need to rehearse the dispatch of ground troops in the Mediterranean.