NATO’s “space strategy” – what is it all about? 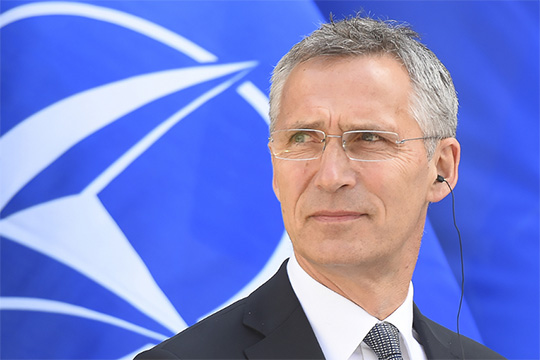 In a Twitter post released in June 2019, NATO Secretary General Jens Stoltenberg said that the North Atlantic Alliance planned to develop its own “space strategy.” According to Deutsche Welle, NATO experts are certain that future military conflicts will inevitably affect near-Earth space, “for example, through an attack on satellites of strategic importance or through the use of a weapon in space.”

NATO explains the need to “declare space a separate territory for military operations” by the emergence of new threats posed by technological progress. The argumentation is of a standard military-bureaucratic nature: as new technologies keep coming along, “exploring” their potential military application becomes imperative. Moreover, NATO’s core members – the United States, France and Britain – clearly go beyond purely theoretical “research” in the field of weaponization of outer space. In December 2019, President Donald Trump issued an order to create the US Space Command with an eye to turning space into a domain of warfare.

Judging by the information available in open sources, it could be safe to assume that in its space warfare plans, the North Atlantic Alliance could move along a path similar to its policy in the field of cyberspace operations. Indeed, in 2016, NATO outlined a common view whereby a cyberattack can, under certain circumstances, be considered a reason for implementing Article 5 of the North Atlantic Treaty, thus activating the principle of collective defense, which is at the very heart of NATO’s founding treaty. Computer networks, infrastructure and software were designated as a separate area for developing the tactics and strategy of combat operations on land, on high seas and in the air. A unified coordination center for cyber operations was set up in Mons, Belgium, in October 2018.

However, NATO has not yet been able to agree a cyber security doctrine that would suit all of its members. According to The Economist, plans are apace to do this within the next "year or two." So far, there has been no mention of any joint offensive operations in cyberspace, which are within the exclusive competence of the NATO member states. The Allied Command Transformation, responsible for the development of promising concepts of warfare, will work out a doctrine of cyber operations already within the next few years, although this work has just begun. NATO is thus moving on to the next task even before it has solved any one from the list of “new challenges.” According to German media reports, once the planned “space strategy” has been duly implemented, NATO will move on to the allocation of “additional resources,” and view "possible space attacks" as "attacks on the ground, in the air, at sea and in cyberspace."

Here NATO may hit several serious snags, the first being President Trump’s open distrust of the alliance. Trump has on several occasions expressed his doubts about NATO’s value for the United States. During his election campaign he described NATO as “obsolete,” and already in office he has repeatedly put in question his commitment to the organization’s fundamental collective defense principle. Reports about Trump’s desire to pull the United States out of the North Atlantic Alliance started leaking into the media from the very start of his presidency. He openly hinted about his readiness to dramatically downsize US military support for Europe, and even warned that Washington could go it alone” if its European allies failed to “cooperate.” In April, Washington did not invite the heads of government of NATO member states to celebrations marking the 70th anniversary of the North Atlantic Alliance in what many Western media outlets described as a sign of the diminished status of NATO.

The past experience of overcoming a similar period of "cooling" in Washington’s relations with Europe under President George W. Bush, is prodding the leaders of some European NATO member states to fall into Washington’s line. In the field of defense, one of the Trump Administration’s priorities was to undermine strategic stability, including by reviving the concept of achieving "decisive superiority" in the militarization of space. Unhappy about the European NATO members’ “inadequate” defense spending, President Trump demanded and obtained in 2014 their promise to increase their defense outlays to 2 percent of GDP.

However, only a handful of them have managed to meet this target to date.

Meanwhile, more and more European experts now fear that Washington’s desire to decrease its commitment to the existing system of Western alliances could stay on even after Donald Trump has left the White House.  Moreover, the political and diplomatic steps taken by the Trump Administration indicate a desire to use NATO to advance US, rather than Western-shared geopolitical interests in Europe. Many Europeans also suspect that Trump’s verbal attacks are meant to disguise Washington’s true desire to undermine EU unity and geopolitical prospects. As if to justify these suspicions, Washington started openly calling the EU a “weak” and “incapable” union and pitching the idea of a US-adjusted North Atlantic Alliance to replace the new “unifier of Europe.” During the 2018 NATO summit, these disagreements boiled over to an extent that in the fall of that same year the French and German leaders called for creating an independent European army.

The Europeans’ intention to expand NATO’s "zone of responsibility" to space might look like an attempt to meet Washington’s demands, though in its own way – to increase spending under the 2% NATO quota not by buying more US-made arms, but by expanding national and continent-wide space programs. After all, many space R&D and technologies have a “dual” potential and can be used for military and civilian purposes alike.

Technology-wise, NATO’s space plans face another hurdle, since when it comes to "military" space, the United States is way ahead of all of its allies combined. The US military space budget for this year exceeds $12 billion, with $14 billion requested by the Pentagon for 2020. [i] By contrast, the similar budget of France, which is second among NATO countries in terms of “military” space spending, is a mere 3.6 billion euros for the next five years. [ii] By the end of Trump’s first year in office, Washington’s missile defense policy was “radically revised” with significant spikes in related spending added to the country’s defense appropriations list. The US Space Command is in the process of being set up.

On January 17, the United States released the National Missile Defense Review, which prioritizes, among other things, the deployment in the near-Earth orbit of combat lasers capable of shooting down ICBMs. It outlines an essentially global task of covering the entire territories of the United States and its allies that comes in place of the previous goal of ensuring protection against a "limited ballistic missile strike." [iii]

The Pentagon is mulling a constellation of small and cheap satellites placed in a low-Earth orbit to track ICBMs at every stage of their flight, as well as “non-kinetic means of influencing space vehicles,” speeding up the development and launchings of dual-purpose satellites, and influencing foreign spacecraft under the pretext of dealing with space junk. [iv] According to Western and Russian experts, the United States plans to study the possibility of placing in orbit missile or laser interceptors, along with “cluster groups” and anti-missile weapons.

For comparison, France, which is NATO’s second biggest space power, doesn’t come even close to this. In order to finally keep up with America, Paris recently unveiled a “Space Defense Strategy” with an eye to developing new orbital weapons, creating a “single command” and establishing the armed forces’ “direct control over military satellites.” When unveiling the Strategy in July, President Emmanuel Macron said: “We will better protect our satellites, including in an active way” [v]. Still, the French military’s growing interest in space “exploration” does not necessarily mean that it is ready to follow in America’s wake. A well-known pragmatist, President Macron has recently been emphasizing the objective need for Europe to offset US influence. In June, Macron spoke in favor of mending fences with Russia.

“Europe, that I believe in… must build new rules of trust and security with Russia, and should not only agree with NATO. It needs to build [relations] only between Europe and Russia,” Macron stressed.[vi]

Finally, NATO has once again been pointing to Moscow’s alleged “aggressiveness” to justify its military preparations of the past few years.  However, it is Russia - one of the world’s leading space powers that has consistently been opposing attempts to militarize outer space. Russia and China have spent many years promoting a draft treaty that would ban the deployment of weapons in space, and the use of force or the threat of force against space objects. The Russian-Chinese initiative is based on a political commitment not to be the first to place weapons in outer space [vii]. As for the United States, it is the main opponent of any international legal initiatives aimed at preventing an arms race in space. On April 1, 2019, it became known that Washington had blocked the final report by a team of UN experts on measures to prevent the deployment of weapons in outer space. Most recently, during a July 26 meeting of the BRICS Foreign Ministers Council, Russia’s Foreign Minister, Sergei Lavrov, once again warned Washington not to bring “weapons into outer space, which would lead to a new qualitative turn in the global arms race” [viii].

With the demise of the Cold War, NATO lost the two key elements that had justified its existence, namely “the enemy” and “the mission.” During the past thirty years, however, the North Atlantic Alliance has been desperately searching for those past priorities for which its members would have to keep sacrificing a considerable portion of their own interests. Will the new “space” plans be able to keep the alliance alive, or will they become a new confirmation of NATO’s chronic problem - the inability to identify the right challenges, priorities and tasks of this day and age?