New "executive branch" of EU and Russia: EU hostile, but not united 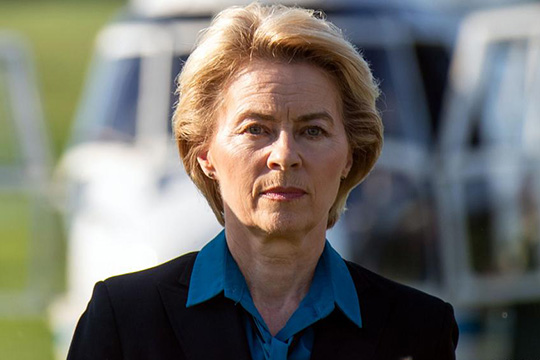 Significantly, both the "prime minister" and the "foreign minister" from the European Union’s new team have been spotted making outrageously averse remarks regarding Russia. Ursula von der Leyen, holding the post of Minister of Defense of the Federal Republic of Germany, said less than a year ago that one ought to speak with Russia from a position of strength. In response, Russian Defense Minister Sergei Shoigu advised Ms. von der Leyen and other Germans to ask their grandfathers what happens when Germans try to speak with Russia from a position of strength. (1) Josep Borrell, speaking in an interview with the Spanish El Periodico, described Russia as "an old enemy" of Spain and Europe that is somewhat  "posing a threat again," whereas China, in his words, is but a "rival”. (2)

The Russian Foreign Ministry reacted by demanding that Borrell account for these words, which clearly do not fit into the framework of friendly relations between Russia and Spain. The EU’s foreign policy chief-to-be came out of this situation with an elephantlike grace, chiding the Russian Foreign Ministry for “excessive” reaction and explaining his position by saying the following: “I said that Europe’s old defender - the United States – is no longer defending it, causing the rise of Europe’s former rival - the USSR " (3). Thus, the European diplomat has managed to strengthen a prejudice-based lie (about Russia as an enemy) with another (about the notorious “attempts by Putin to restore the USSR”). And there is a third lie - a hint at the now dishonored theory of a conspiracy between Trump and Russia. For someone  burdened with the responsibilities of the head of European diplomacy, there seem to be too many prejudices and stereotypes. In all likelihood, these new representatives of the EU will not be easy to deal with.

Nevertheless, the near victory of von der Leyen and the removal from the race of the Dutch socialist Frans Timmermans, and representative of the European People’s Party (i.e.”Democratic Christian”) Manfred Weber of Bavaria, speaks of serious differences, bordering on hatred, within the EU. After all, it’s these two nominees (plus Danish liberal Margrethe Vestager, who served as European Commissioner for Competition) that were considered favorites for the post of  European Commission chief right up to the G20 summit in Osaka. Chancellor Angela Merkel, who openly supported Weber’s candidacy and wanted the job of European Central Bank chief for the current head of the German Central Bank, Jens Weidmann, appears to be on the losing side, given the current layout of forces. Even such a well-informed player in European affairs as George Soros, predicted on the platform of the globalist Project Syndicate that in the event of Weber’s “failure” to head the European Commission, Merkel’s ambitions would be offset by the appointment of Jens Weidman. (4) But this just didn’t happen: the EU’s top finance position went to Christine Lagarde.

The European Union makes it no secret that countries of the “Visegrad group”, first of all, Poland and Hungary, came out against Timmermans. And this is no wonder: it was Timmermans, as vice-president of the European Commission, who “oversaw” Poland’s punishment for its “sins against democracy” and has called for sanctions against Warsaw if it does not abandon so unwelcome for the EU judicial reform. As for Hungary, Timmermans was as harsh with its Prime Minister Viktor Orban. As a result, even Andrei Babis, the Prime Minister of the Czech Republic, which did not have time, unlike Poland and Hungary, to experience the negative rhetoric of Timmermans, said bluntly: “Timmermans is not the person who can unite Europe.” (5)

As it happens, by voting against Timmermans, the current Polish leadership took revenge for their own failure last year, when they made an attempt to remove Donald Tusk, former Polish prime minister considered to be EU-loyal political opponent of the current ruling party in Poland, "Law and Justice".

Thus, the current choice of candidates has become a sign of ever increasing instability and unpredictability of the European Union, including in its relations with Russia. In my opinion, two trends are gaining strength at the same time. Firstly, the selection of candidates for top jobs in the European “mainstream” is based, among other things, on the principle “who speaks harshiest of Russia will win” ( this guaranteed success of von der Leyen and Borrell). Secondly, as Eastern European countries are slowly gaining weight, their attitude towards Russia ranges from hostile ( Poland and the Baltic States) to neutral and conciliatory ( Hungarian Prime Minister Orban).

The Orban factor, according to a variety of reports, became a key one for “not supporting” Manfred Weber’s candidacy on the part of France, which eventually led Weber to defeat. President Macron did not conceal his discontent with the fact that Weber, as head of the European People’s Party faction in the European Parliament, did not exclude Viktor Orban and his party Fides from this faction.

The French newspaper Le Monde carries detailed reports on the issue (6). For the French president, who deems Orban, along with Italian Interior Minister Matteo Salvini,  his personal enemies over disagreements on migration issues, any means will do to fight against the Hungarian politician. Le Monde carries reports about Macron’s attempts to cut down EU payments to the Hungarian budget due to Hungary’s unwillingness to bear its share of the migration burden on the EU. And although Macron has not succeeded in these attempts,  the battle between the “progressists” (Macron) and the “traditionalists” (Orban and the Visegrad Group, which is behind him) is driving the main wedge into the European Union, including its position towards  Russia. Both the elections to the European Parliament and the differences over the candidacies for the “executive branch” of the European Union have clearly demonstrated this.