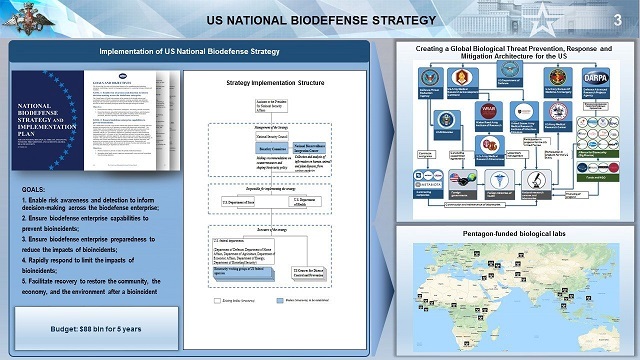 The Ninth Review Conference of the Biological Weapons Convention (BWC) is to take place in Geneva, Switzerland, from 28 November to 16 December 2022. Such sessions are organised every five years in accordance with Article 12 of the Convention to examine the present state of the BWC, compliance challenges, and to review scientific and technological advancements having dual-use potential.

On October 18, the White House released a new Biodefence Strategy (USBS), with a budget of $88 bln., including $17 bln. in the first year.

The document states it is a vital interest of the United States to manage the risk of biological incidents, and that the response to their occurrence would be harsh and rapid. The United States is attempting to meddle in the domestic affairs of other countries once more.

The USBS mentioned to take steps to mitigate those risks, regardless of whether they originate in the United States or abroad. The goal is to continue research on the agents that cause extremely deadly infectious illnesses that are endemic to certain areas.

Another strategic planning document is the updated Defense Threat Reduction Agency (DTRA) strategy through 2027, which explicitly acknowledges its dual role. It is to not only provide protection, but also combat support to military units. According to the strategy, one of DTRA's priority tasks is to ensure the military superiority of the US armed forces over the enemy.

In October 2022, for example, Boston University developed a synthetic coronavirus pathogen based on the Omicron strain and the original 'Wuhan' variety. The modified virus acquired by the Americans killed 80% of infected model animals, causing abnormal neurological signs and significant lung damage. Antibody testing revealed an 11-fold decline in their capacity to neutralize the new virus, as well as the ineffectiveness of current vaccinations. 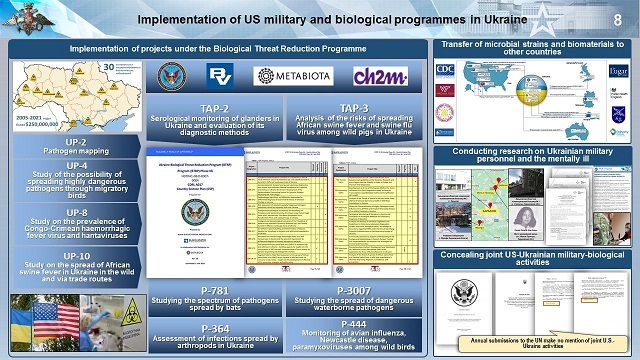 The Russian Federation has repeatedly pointed to evidence that the United States and its allies are conducting dual-use programs outside their national borders through the operation of bio-laboratories under their control and so-called shared-use laboratories funded by the States’ military departments or organisations affiliated with them.

Many questions concerning the true goals of the Pentagon's research programs have been raised in numerous international venues, but have so far gone unanswered. In response to new challenges and dangers, the Russian Federation suggests the following:

Firstly, to reopen discussions for a legally binding Protocol to the BWC that contains lists of viruses, poisons, and specialised equipment, takes into account contemporary biological research and technology, and includes an effective verification regime.

Secondly, confidence-building methods should be supplemented with information about biological defence research and development outside of national boundaries, as well as animal vaccine production facilities.

And thirdly, to establish a scientific Advisory Committee with broad geographical representation and equal rights for participants to evaluate advances in science and technology related to the Convention.

Based on the data possessed by the Defense Ministry.