New plans for "star wars" or bluff to wear out foes? 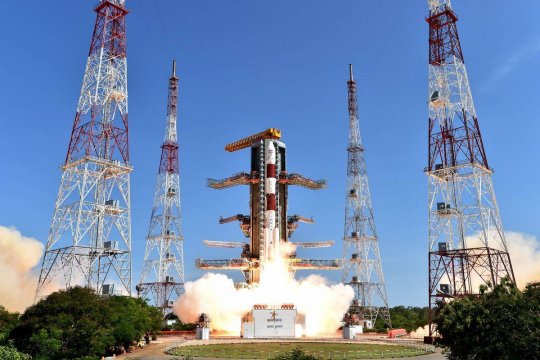 On March 27, the Indian leadership announced a successful destruction by a missile launched from the ground of a space satellite positioned at an altitude of about 300 km. According to Western media reports, thus the number of countries that have successfully tested anti-satellite weapons technology has increased to four [i]. Western anaylists accounting for India’s moves say they have been prompted by fears about China’s military capabilities, which Beijing demonstrated back in 2007. Meanwhile, on January 17 this year, the United States released the first in nine years, review of the country’s Anti-Missile Defense strategy. One of the priority projects involves near-earth orbit combat lasers capable of shooting down intercontinental ballistic missiles (ICBMs). On April 1, it was announced that the United States had blocked the final report of a UN expert group which envisaged measures to prevent the deployment of weapons in outer space. Who is pushing a space arms race?

India’s recent project to test means of destruction of space objects indicate that  compared to nuclear weapons, anti-satellite weapons technology needed a much shorter time to spread beyond the “club” of leading players. Significantly, each time the initiative to develop these types of weapons came from Washington. The first tests of the US anti-satellite weapon system were carried out in October 1959. Now, US President Donald Trump’s ambitious plans to deploy combat systems in outer space bring back memories of the infamous ‘star wars’ initiative, which was launched by Ronald Reagan in the early 1980s.

The Strategic Defense Initiative (SDI), proclaimed by President Reagan in March 1983, has been described by many American experts as “a big scam”. Nevertheless, many in the US believe that a new round of arms race, which was prompted by SDI, played a significant role in the economic collapse of the USSR. By the end of the 1990s, the United States claimed to have achieved unparalleled military might and as great political and economic influence in the world. That means that America can openly proclaim a de facto imperial strategy of conduct on the international scene. Washington has made an unequivocal bid for strategic dominance in all areas of human presence, including outer space. As a result, President George W. Bush withdrew from the Anti-Ballistic Missile Treaty.

The withdrawal from the ABM Treaty all but confirmed fears that the United States never stopped developing new space technologies for military purposes. In 2004, it put into operation the ground-based midcourse phase antimissile defense system (GMD),which is designed to combat ICBMs, while its main targets, until recently, were the missile potentials of Iran and North Korea. However, in 2008, the so-called ‘younger sister’ of the GMD interceptor – the SM-3 missile, which is part of the Aegis ship-based missile defense system, - successfully hit a satellite in a 240km orbit. Notably, the potential capabilities of a GMD missile (known as the Ground-Based Interceptor - GBI) are much more significant. Developing a speed of 7-8 kilometers per second, GBI is able to bring the striking combat unit to a height of 6 thousand kilometers. Thus, any satellites in low earth orbit [ii] and some spacecraft in high elliptical orbit [iii] are within its range.

However, the new "American nationalists" want more than this. By the end of the first year of Trump’s presidency, they managed to secure a “comprehensive revision of the US missile defense policy” and establish provisions for a significant increase in military spending. In place of protection from a "limited ballistic missile strike," they declared the essentially global goal of covering the territory of the United States and its allies [iv]. Finally, in December 2018, Trump issued an order to set up a US Space Command with a view to carry out military operations in space. At present, Pentagon officials are contemplating an appropriate strategy for launching a variety of small and cheap satellites to the low-Earth orbit to track the flight of an ICBM at all its stages without exception. They are considering “non-kinetic means of impacting spacecraft”, a further development of and the launching of dual-purpose satellites, intercepting or disabling foreign spacecraft under the pretext of fighting space debris. [v] According to Western and Russian experts, in the near future the United States plans to look into the possibility of deploying interceptor missiles or laser installations and “cluster groups” of anti-satellite and anti-missile weapons in space.

In addition to military, defense, organizational and bureaucratic measures in guaranteeing a new stage of militarization of space, Washington has been making a number of unambiguous diplomatic steps. In January this year, the United States suspended its participation in the Intermediate-Range Nuclear Forces Treaty and is set on burying it for good in six months. Simultaneously, Washington has jeopardized the last of the existing strategic arms limitation agreements - the Strategic Arms Reduction Treaty (START-3), which, if not renewed, will no longer be valid by 2021. The United States is the main opponent to any international legal initiatives on the prevention of arms race in outer space. Among these initiatives, first of all, is the Russian-Chinese draft treaty on the prevention of the deployment of weapons in outer space, on measures to prevent the use of force against space objects. The treaty is based on a political pledge not to be the first to deploy weapons in space [vi]. Thus, the United States has persistently been pursuing the policy of “breaking the instruments of strategic stability” [vii] – something that causes the concern of the world’s top players.

Economic and technological competition is becoming the main area of rivalry between the leading powers. We can even say that it is replacing the military-political confrontation. However, everyone understands that even the “theoretical possibility of creating a reliable national missile defense system and the development of missile defense programs” jeopardizes the strategic deterrence potential of any of the nuclear powers [viii]. However, the political agenda chosen by the current US leadership is not seen just as another attempt to regain “world supremacy” or maintain unilateral military superiority. Trump has opted for a slow "strangulation" of competitors, a financial and economic "offensive". He is trying to force unwelcome countries into making a choice between the logic of economic development and the “logic of geopolitical confrontation”, between modern reforms and “security and control priorities”. Apparently, according to Washington’s plan, space systems should become a new policy tool and an effective instrument of pressure to exert on countries that are lagging behind in space technology development.

Russia is well aware of the threats and challenges the new American strategy is fraught with. The US’ attempts to "unceremoniously crush strategic stability in their favor" do not go unanswered. Asymmetrical,  but extremely effective due to “advances in military technology” [ix]. Moscow’s composure and determination was demonstrated on March 1 last year by President Vladimir Putin, as he spoke of Russia’s brand new strategic weapons systems. At the same time, Russia is not looking for unilateral advantages and is steadily in favor of "thwarting an arms race in outer space." Moscow is prepared for a parity dialogue “with all states in order to keep outer space free from weapons of any kind - one of the major conditions for ensuring international peace and security,” - the Russian Foreign Ministry said.

In general, as in the 1980s, the current US military space plans have triggered a fairly skeptical reaction from many American and international experts. Like before, the main driving force may not be so much to do with translating these plans into practice as tapping into the huge budgetary funds and an attempt to drag geopolitical competitors into a new technological race. Meanwhile, the dangerous nature of the current US space initiatives is associated with changes in the global parameters of strategic stability. Thus, India’s steps towards the development of space destruction weapons can hardly be directed against the United States. Nonetheless, Washington’s persistent attempts to draw Russia and China into a bilateral military-political confrontation of the type of the Cold War force them to take retaliatory steps.

At the same time, the United States is demonstrating blatant unwillingness to discuss not only a ban, but even measures to limit or establish international control   over military activities in space. Given the situation, more and more states that deem national sovereignty a lasting value are taking preventive measures based on the most dramatic scenario for changes in the international strategic environment.

[i] The antisatellite potential of the fifth country, Israel, causes debate among specialists.

[vii] Among other examples, the apparent loss of interest on the part of the United States in the Comprehensive Nuclear-Test-Ban Treaty;taking from the limits of the START Treaty submarine-borne missiles and heavy bombers under the pretext of their “re-equipment” to serve non-nuclear purposes.