New START and the Missile Defense: the Evaporating Guarantees 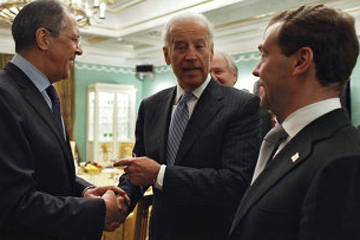 Overwhelmed with the outbursts of white noise which accompanied the New START ratification, for a period of time the Russian diplomacy seemed oblivious to Washington's missile defense plans, including those pertinent to the European part of the missile shield. Moscow's wishlist at the final phase of the ratification process in the Russian parliament was so modest that eventually Washington only had to consent to mentioning in the New START preamble that the strategic arms cuts and missile defense were indeed interlocking themes and to promise that some day an agreement aimed at attaining balance between offensive and defensive weapons would also make it to the negotiating table. The Russian parliament did issue a statement addressed to the US Senate stressing that the US unilateral efforts to build a global missile defense sphere can erode stability in the nuclear arms sphere  and calling for Washington to withdraw missile defense infrastructures from East Europe. The initiative was hardly supposed to produce practical results considering that B. Obama indicated on the eve of the New START ratification in the US Senate that Europe would get a flexible missile defense anyhow.

The US Senate's resolution on the New START ratification reads: “The New START Treaty and the April 7, 2010, unilateral statement of the Russian Federation on missile defense do not limit in any way, and shall not be interpreted as limiting, activities that the United States Government currently plans or that might be required over the duration of the New START Treaty to protect the United States pursuant to the National Missile Defense Act of 1999, or to protect United States Armed Forces and United States allies from limited ballistic missile attack, including further planned enhancements to the Ground-based Midcourse Defense system and all phases of the Phased Adaptive Approach to missile defense in Europe”. US Secretary of State H. Clinton said in Warsaw almost immediately following the US Senate's passing the resolution that Washington was determined to fulfill the December, 2010 US-Polish agreement on the siting of missile defense infrastructures in Poland and promised the country an emergency plan for its defense. According to H. Clinton, the US Air Force unit tasked with the construction would be deployed in Poland on a permanent basis.

Back in September, 2009 B. Obama rolled out a plan for the construction of the third – European – site of the US missile defense. As he said in an interview to CBS, he had no doubts concerning the project which would be fully modernized and would rely on tested but relatively more advanced technologies.

The third site is to materialize by 2020, while for the time being the US Navy ships equipped with radars and interceptors are charged with the mission. The whole plan will be implemented in four phases. At the first phase ending tentatively in 2011 Europe will host the already created and proven systems including the ship-based Aegis, the SM-3 (IA) interceptors, and the AN/TPY-2 ship-based radars which will altogether shield Europe from regional-scale ballistic missile threats. The second phase will be completed by 2015. More powerful SM-3(IB) interceptors, both ship-based and ground-based, will be deployed following rounds of testing along with more advanced sensors meant to broaden the zone of defense against small-range and mid-range missile threats. The third phase closing by 2018 is aimed at finalizing the development, testing, and deployment of the SM-3 (IIA) interceptor. The fourth phase will end by 2020 when the SM-3 (IIB) interceptors will be deployed to neutralize the mid-range and long-range missile threats as well as the potential future intercontinental ballistic threats to the US.

As H. Clinton's conversation with Polish diplomacy chef R. Sikorski showed, the US is starting to put its plans into practice, the siting in Poland being just one of steps in the direction. Next week, the Monterey missile cruiser carrying the Aegis radar system will leave Norfolk (Virginia) for the Mediterranean Sea which it will be patrolling for six months as a part of the US missile defense program for Europe. The Pentagon says it is going to be the first practical demonstration of the US intentions aimed at protecting the US forces and partners in Europe against missile threats.

It is not going to be the last demonstration, no doubt. It was announced already that the US Navy's presence in the Mediterranean Sea would become permanent. The multi-functional ship-based Aegis systems can track 250-300 targets, attack those it recognizes as immediate threats in the framework of automated decision-making, and guide up to 18 interceptors. The SM-3 interceptors integrated with the Aegis have the capability to intercept warheads in space. An SM-3 interceptor launched from the Lake Erie cruiser hit a target flying at the altitude of around 250 km at 7.6 km/s during the 2008 testing.

It is true that US interceptors based in the Mediterranean Sea have no potential to neutralize Russian ballistic missiles targeting the US since the corresponding trajectories pass above the North Pole. However, sooner or later the US ships involved in missile defense will likely show up in the Arctic region, the North Sea, and the Baltic Sea, so that the Mediterranean Sea may only be the part of the world used as an exercise site. As an alternative, the US can rely on land-based missile defense infrastructures. For example, the SM-3 interceptors integrated with the Aegis system are going to be deployed in Morong, Poland.

What does it really take to make Russia respond to the US missile defense plans with serious steps? The global strategic stability depends on the answer to the question. Moscow failed to insist on drawing a border of the mobile missile defense systems deployment zone, trespassing which would entail Russia's withdrawal from the New Start. Those of the Russian politicians who expressed the view that Moscow can scrap the Treaty if it feels its security is being undermined sounded unconvincing as no clear criteria for the reaction are established. At the moment  - in line with the warnings signaled by a number of experts - we are beginning to face the consequences of the lack of caution in signing and ratifying the New START. The only solution is to do everything possible to make Washington open negotiations aimed at reaching a specific deal on anti-missiles. There is no time to waste – the work must begin already during US Vice President J. Biden's March 9-10 Moscow visit.