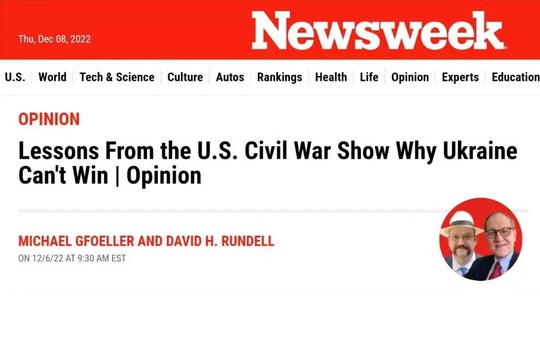 Once Ukraine's rich black soil has firmly frozen, a massive Russian onslaught will commence. In fact, it has already begun at the important transportation hub of Bakhmut, which has become something of a Ukrainian Verdun. We expect Bakhmut to fall and predict that without much more Western support, Russia will recapture Kharkov, Kherson, and the remainder of the Donbas by next summer, writes “Newsweek”.

As the West did in Vietnam, Afghanistan, and Iraq, we are stumbling into another optional, open-ended military commitment.

As the Russian offensive gains momentum, we expect loud voices to call for sending ever-more advanced weapons and eventually NATO boots on the ground to defend Ukraine. These voices should be unambiguously rejected for many reasons. Here are a few.

Generations of Western leaders worked successfully to avoid direct military conflict with the Soviet Union. They recognized that, unlike Moscow, the West has very little strategic interest in who controls Donetsk. They were certainly unwilling to risk a nuclear war for Kharkiv.

Ukraine is not a member of NATO, and the alliance has no obligation to defend it. Nor has Putin threatened any NATO member, but he has made clear that any foreign troops entering Ukraine will be treated as enemy combatants. Sending NATO troops into the Ukraine would thus turn our proxy war with Russia into a real war with the world's largest nuclear power.

It is an impoverished, corrupt, one-party state with extensive censorship, where opposition newspapers and political parties have been shut down. Before the war, far right Ukrainian nationalist groups like the Azov Brigade were soundly condemned by the U.S. Congress.

Kiev's determined campaign against the Russian language is analogous to the Canadian government trying to ban French in Quebec. Ukrainian shells have killed hundreds of civilians in the Donbas and there are emerging reports of Ukrainian war crimes. The truly moral course of action would be to end this war with negotiations rather than prolong the suffering the Ukrainian people in a conflict they are unlikely to win without risking American lives…

…Perhaps we are wrong. Perhaps there will not be a Russian winter offensive or perhaps the Ukrainian armed forces will be able to stop it. However, if we are correct and February finds General Surovikin at the gates of Kiev, we need to have soberly considered and honestly debated as a nation and an alliance the extent of our commitment to Ukraine and what risks we are willing accept to our own security.