Newsweek: “Admitting Ukraine to the NATO alliance is the worst idea ever” 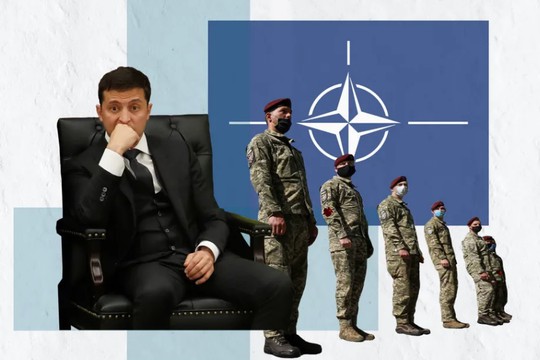 “Admitting Ukraine to the alliance, Mr. Zelensky, is the worst idea ever,” writes “Newsweek”. If NATO went along with it, a war would start like none we've ever seen: Endless troops, streams of tanks, a sky blotted out by warplanes. And that's the best-case scenario.

It's far more likely that there would be little left of humanity after war was joined between the United States/NATO and Russia.

And would China pick a side? Or simply see an opportunity?

Could we avoid at least a "limited" nuclear war under such circumstances? It's doubtful.

Desperation is a powerful motivator and last resorts are not never resorts.

And that's what Zelensky is asking for with his request for "accelerated" consideration of his country's NATO application. ‘Accelerated’ or not, the idea is a non-starter.

Article 5 of NATO's founding document promises that an attack on one member is an attack on all. Definitionally, bringing in a country at war brings the entire alliance into the fight.

That means tanks, bombs, artillery, HIMARS, drones, operated by — God forgive us — valorous men and women of the U.S., the United Kingdom, France, Italy, Germany, and 25 others, including tiny Montenegro. So, where does that leave NATO?

Every which way, allowing Ukraine to join is insanity.

President Biden has so far resisted sending a long-ish-range missile system to Ukraine, for fear that giving Zelensky weapons that could strike into Russia, or do extensive damage in Russian-held Crimea, could spark World War III.

At the highest levels, the U.S. thinks there's a good chance there's going to be a fight, as Thomas Hobbes said, of "all against all."

US National Security Advisor Jake Sullivan articulated that it was “not the right time” for Ukraine’s admission to the alliance and the application “should be taken up at a different time.” His underlying message was: The US does not need Ukraine as a NATO member, but needs Ukraine, rather than the whole of NATO, to fight against Russia.

The value of Ukraine as a pawn has not yet been fully exploited by the US, emphasizes Chinese “Global Times”.

NATO has a clear standard when it comes to expansion – to gain more advantage, rather than taking on a burden.

The US won’t cease sending strategic assistance to Ukraine. But whether or not to soon absorb the country into NATO is another story. Only when Ukraine develops itself into a stable and prosperous country without conflict both at home and broad will it be the realistic timing for it to become a NATO member.

Whether the conflict will spiral out of control is everyone’s concern.

For Ukraine, it may believe its way out is joining NATO. “We are de facto allies… Ukraine is applying to make it de jure,” Zelensky said.

But the US does not think so. Washington just wants Ukraine to be de facto bullet bait period, writes Chinese newspaper.