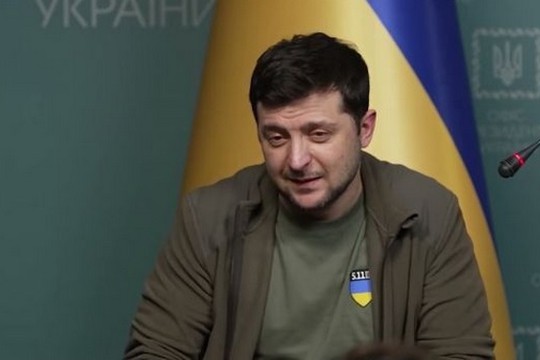 “Our present ruling class demonstrates no interest in common sense de-escalation, and instead demonstrates a seemingly interminable interest in escalation and Ukrainian territorial maximalism, speaks volumes about how out of touch that ruling class is. If nothing else, hopefully the American people speak up and begin to rein in our sordid, war-hungry ruling class at the ballot box next month,” reveals Josh Hammer, as Newsweek opinion editor. He writes about the public mood in the United States towards the Ukrainian conflict.

“Our national interest in the Ukrainian theater is not coterminous with Zelensky's absolutist stance; our interest is for de-escalation, detente, and peace. But if we want to achieve those ends — especially as the threat of nuclear warfare is bursting out into the open, many in the West recklessly double down on calls for Ukraine's ascension to NATO, and the war-hungry Zelensky (photo) is himself calling for a NATO-led "preemptive strike" against Russia — Biden needs to recognize reality and change strategic course immediately.

Zelensky is a highly flawed leader; but he, despite myriad flaws, is a pawn of the Davos/NGO globalist class.

Let's be as clear as possible: The median American citizen does not, and should not, care whether an ethnically divided, strategically unimportant, historically contested Slavic subregion or two in eastern Ukraine ultimately takes orders from Kyiv or Moscow.

Elon Musk, in a much-criticized tweet, had the right idea: "Ukraine-Russia Peace," he argued, can best be achieved by "Redo[ing] elections of annexed regions [such as Luhansk and Donetsk] under UN supervision," and "Russia leaves if that is will of the people"; "Crimea formally part of Russia, as it has been since 1783 (until Khrushchev's mistake)"; "Water supply to Crimea assured"; and "Ukraine remains neutral [between Russia and NATO]."

One can certainly quibble with Musk's details — the United Nations, for instance, cannot be a trusted, neutral arbiter or supervisor of anything. But this is certainly the right idea for what the U.S., and by extension the West, should be doing and should be aiming toward.

The Biden administration, if it had any common sense, would use any and all leverage to get Zelensky and Putin to the negotiating table as soon as possible, thus unequivocally taking the threat of nuclear catastrophe off the table and extricating the United States and NATO from the harrowing prospect of something no Cold War-era president would have ever countenanced: open and direct military confrontation with the world's largest nuclear arsenal.