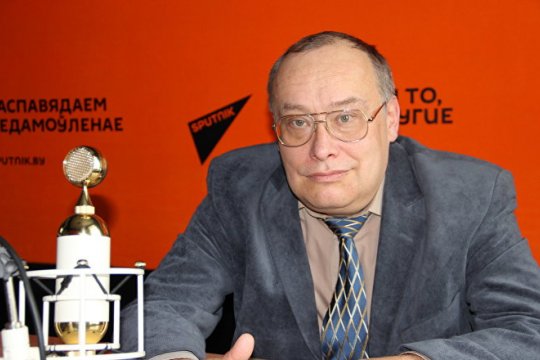 Brussels has hosted an extraordinary summit of the EU on the situation in Belarus. Commenting on this is Nikolai Mezhevich, Director of the Belarus Research Center of the Institute of Europe of the Russian Academy of Sciences.

Nikolai Mezhevich: We ought to avoid if possible being too emotional. We need to acknowledge that the Republic of Belarus is a European country, which means the European Union as a whole and European states separately have the right to express their judgement. This judgement is logical in terms of geography, economy, politics etc. Another matter is how logical estimates by Warsaw, Vilnius, Berlin and Paris are in terms of the processes that are taking place in the world and naturally, affect the assessment of the events in Belarus. Another issue is the assessment of the events that are happening in Minsk proper and other cities. When our European partners talk about violence in Minsk, we might agree, but the impression one gets from the comments that come next is that European countries are living in a different, abstract world, where street violence does not exist, where they never had such things as Berlin protests or Paris rallies. I would like to know if there were European capitals in the past year or two where there were no protests or clashes with the police quelling them. Or is unrest today a sign of the times, a sign of contemporary civilization, including the European one? For this reason, while judging Minsk, one should not forget that incidents occur in other countries as well, both on the part of the opposition, and on the part of the government. One can deny the presence of a crisis or excessive use of force only if one knows the situation inside out, by the facts, each specific case separately. It seems to me that for today, even the government of the Republic of Belarus, the Interior Ministry the Investigatory Committee, the Prosecutor’s Office have no control of the situation, as too little time has passed since the events we are discussing. As for violence, proved facts of violence, this could be the subject of negotiations, there could be recommendations, but only on the basis of unconditional recognition of the fact that the Republic of Belarus is a sovereign state, which has the right to resort to compulsory measures. Excess of such measures could be the subject of discussion. In fact, for those people in Minsk and Moscow who said: “Economic integration of the Republic of Belarus and Russia is necessary and inevitable”, actions which are taken by the European Union are of great importance. This proves them right. This proves that sanctions can be announced at any moment, then they are recalled, then announced, then intensified, and so on, and so forth. Moscow is a reliable partner for Minsk, while Minsk is a reliable partner for Moscow. Our readers would object, they would say that there have been so many unpleasantries in our relations in the past one or two years. Yes, very many unpleasant things, but these are lessons to be learned and set straight after the events of August this year. After this, people that have become known as “union integrators”, these people acquire additional arguments in favor of economic, and, I dare say, political integration between the two states, while their opponents have no extra arguments, as Belarus is facing more sanctions. The question is about the scope. What areas will they cover, how will they be distributed? That Alexander Grigorievich will not be allowed into Europe and will not be able to eat cepelinas in Vilnius is not the most traumatic issue he is struggling with at the moment.

I suppose that the president is drawing certain conclusions. Until August I had an impression that he sees no difference in principle between his participation in the elections in 2015, in 2010, and so on and so forth. However, times change. When the president publicized his program for the first time I was 26 years younger, I was a young post-graduate, not a not-so-young professor. Since then there has grown at least one generation which looks differently at everything, absolutely everything, including the fact that Lukashenko together with his comrades prevented an economic crisis and stopped the country from sliding into anarchy in the early 90s. All this did take place but is remembered by those over 50, who become fewer and fewer in number for understandable reasons. This factor had a lot of weight one or two years ago. They now begin to give it credit again, as the authorities urge their supporters to take part in rallies. But this was not the case before. Earlier, we saw that the authorities were confident of victory, were sure that the percent would drop automatically. I would not talk about the percent itself, because in order to judge about rigging or non-rigging one must be present at all polling stations at the same time, but I can say that in terms of social and socio-professional structure and with due regard for the share of pensioners and public sector employees, President Lukashenko could win and must have won, from the viewpoint of the most meticulous of experts, in the first round. However, absence of transparency hampered international and, what is more important, internal recognition of the elections. We were under the strong impact of the events in Ukraine, Maidan has become a household word, but if we focus on the main issue, whether it is possible to topple the incumbent president of the Republic of Belarus through street technologies, I assume that this has become impossible. But whether and to what extent the president is ready for compromises, whether he is ready to convene a constitutional assembly or a constitutional conference and announce not what the opposition urges him for, that “I will resign in 15 minutes”, but to say that there are certain proposals on reforming the political system: we will give freedom of action to the parties, we will create the conditions for party building, we will not deliberately limit this party building, and the opposition is welcome to present their program. Are you against integration with the Collective Security Treaty Organization? Put this on paper. Are you against a union state? Put this on paper. Are you against Eurasian Economic Union? Write this down. Are you in favor of NATO and the European Union? Put this on paper. Are you in favor of eliminating the Russian language? Please, do not hesitate to put all this on paper, in this case,, other political parties will have a chance to say: «And we favor the Collective Security Treaty Organization, we favor a union state, we favor Masherov Prospekt, rather than Tsiolkovsky Prospekt». In such a way we all follow our own way to the voting. But hopes by the opposition that they will get 80% in this new voting demonstrate a poor knowledge of their own country. You may not know foreign countries, this is normal. But the opposition do not know their own country. A heated dispute is currently under way within the Russian expert community as to whether Russian supports Lukashenko or not. The answer should be as follows: «We support the people of Belarus and are trying to help them to avoid sliding into a civil war». We will back the Belorussian people, and as for personalities, this issue is secondary. There is common understanding that Russia deems the elections in the Republic of Belarus fair and President Alexander Lukashenko the winner.