N.Malinov: The snake that knows its end is close stings the bitterest 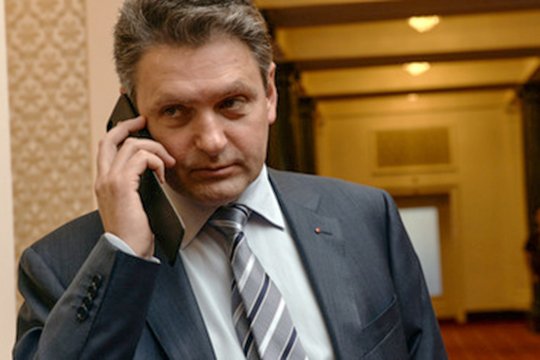 An exclusive interview with Nikolai Malinov, the head of the National Russophile Movement in Bulgaria, accused of spying for Russia.

Nikolai, you are accused of spying for Russia. According to Bulgarian Prosecutor General Sotir Tsatsarov, you “have been collecting information related to Bulgarian foreign policy”. Could you tell me, what evidence is the conclusion founded on?

First and foremost, I would like to say that for me and my colleagues this is all but political terror and persecution for beliefs. The motive is clear – to disrupt friendship between two brotherly nations, Russia and Bulgaria. And in the event they can’t cope with Russophiles in Bulgaria, they go on to encourage  Bulgarphobes in Russia. The Bulgarian Prosecutor's Office is following the style of opponents to the incumbent US president, who would welcome not only Ukrainian, but also a Bulgarian Maidan. Their tactics are well-known. First come the accusations, and then a search for proofs. We identify the same style in the Skripal case, and in the outbreak of a war in Iraq, etc. I think we’ll soon see the last of these methods of communication with opponents, so typical for “unipolar” thinking. And as they say: the snake that knows its end is close stings the bitterest.

For protocol, it needs pointing out that there was no way I could collect any data on Bulgaria’s foreign policy which hadn’t been known because I have no access to classified information, and besides, I’m hardly the kind of person who walks the streets and asks everyone about Bulgarian foreign policy. But speaking of Bulgaria’s foreign policy in general, it has long known that I have a very negative attitude towards Bulgaria’s membership in NATO. In my books, articles and public speeches, I have always emphasized that this membership is detrimental to Bulgarian security. We know that against every base or missile located on the territory of Bulgaria, there is a hit-back missile to be sent from the country that feels under threat, in this case, from Russia. For me, a Bulgarian, who got a place to live in thanks to the 72 thousand Russians who lost their lives “for their own kind” in the Liberation Russo-Turkish War of 1877-1878, for me this is unacceptable. We need to remember our common history, our common roots – the Orthodoxy, the Cyrillic alphabet, - everything that has kept us together for millennia. That’s why a I find all these accusations ugly and beyond understanding.

The Bulgarian Prosecutor’s Office has also published the text of a memo which  was found at your office. It is written in Russian and is addressed, according to the investigation, to the Russian sponsors of the National Russophile Movement. What was written in this report?

I would like to say that this document exists in Bulgarian, Russian, and French. This is a collective report that examines how we could pursue our projects for Bulgarian society to maximum efficiency. Our cultural organization not only organizes concerts, competitions, festivals, Russian language courses in kindergartens, and takes care of historical monuments - it also thinks about other aspects of social work. I must say that we employ more than 35,000 staff and have 240 branches across the country. So, we are the largest non-governmental organization in Bulgaria, which is engaged in cultural activity and is looking into the possibility of acquiring a radio and television channel, creating our own bank, establishing our own university and doing everything that would contribute to this symphony and harmony of our development. The memo contains our ideas about the place Bulgaria should occupy in Europ. We don’t approve of  Bulgaria’s membership in NATO, and we don’t like the fact that the Bulgarian people, the Bulgarian sovereign nation cannot hold referendums on Bulgaria’s foreign policy . As it seems, we need to get down to work to get these ideas across to the wider sections of society. To this end, we must build up and promote the projects we have been developing for 16 years. Some classify this kind of activity as espionage.

I find it absurd that in a democratic country people are not allowed to defend their views on how their nation should pursue its foreign policy agenda. We believe that Bulgaria and Russia are brotherly nations and that you must make friends with your brother before looking in the direction of your “neighbors” overseas.

At the moment, you are under pledge not to leave. When is the next hearing of of your case?

I think that those you call partners, and I call them opponents or enemies, will fail to prove any espionage points. However, they will try to press some kind of tax or financial fraud charges against us. But they will find it more than challenging to incriminate me me or our organization.

I would like to remind you that they arrested and interrogated 15 people and detained 8. This blow is not just against me personally. This is an attempt to blemish our movement and all our activities.

In my opinion, the main blow is against us because a year ago we came up with the initiative to set up an international Russophile movement. This blow is not just against Russia, it is directed against Russia’s friends. We want, using the experience of our Bulgarian organization, to organize and streamline this movement in such a way as to be able to successfully counteract this chaos in which we live, this hybrid war in which we exist, when someone is constantly trying to blemish our values and the image of Russia. Acting in this way, they are besmirching us personally, because we are one civilization - until the middle of the 19th century we spoke the same language, we pray in the same language to God, we have a common Orthodox faith, we share an alphabet. This is what makes us Bulgarian.

Consequently, we take all these “attacks” on our views of the world and on our values personally. Through our cultural work and socio-political events, we are trying to get it across to society in plain terms who we are and what we champion for. What they want to strike at is our attempt to create an international Russophile movement, an international union of Russophile veterans, which consists of former politicians, influential figures, etc. etc.

Do you think that the decision on your arrest was independent or was it passed under pressure from external forces?

I believe that this is, first of all, a campaign against us. Statements by the British Ambassador, the British Embassy, the US Embassy demonstrate that they know about this espionage scandal. I would describe it as a scandal between Russophiles and the Prosecutor's Office. It needs pointing out that the President has made it clear that this is a very serious accusation and there is no evidence to support it. The Bulgarian prime minister put the ‘espionage scandal’ in quotation marks saying that he had nothing to do with it. Eight days after our arrest the Bulgarian Minister of Energy, Ms. Temenuzhka Petkova, said, following a meeting with Russian Minister of Industry Dmitry Manturov, that the espionage scandal was closed. The Bulgarian Parliament has been considering this issue for almost two weeks. And all the explanations provided by the prosecutor and the Minister of the Interior boiled down to accusations of intent.

If I am not mistaken, the criminal code of any country judges for wrongdoings, and not for intentions, even if they deem them criminal. I do not consider our intentions - Bulgaria’s withdrawal from NATO and a worthy place for it in the EU - criminal. For me, this is the right position. We were always open about it, as well as about our and my personal contacts in Russia and Bulgaria.

Your arrest has triggered a public outcry in Russia. Did European NGOs react to it?

I do not know about the reactions of European NGOs. But I know that the participants in a conference in Kaliningrad, which was attended by more than 100 people who represented 30 countries, welcomed with a storm of applause the proposal of the speaker of the event, Russian Senator A. Klimov, who suggested that all this was political repression and political persecution and that we can’t let it happen in Europe again. Of course, the scandal will grow and become part of the agenda at ever more venues. I think that things should be called by their proper names. These are political repressions. We are persecuted for what we do, we are persecuted for our views. Many politicians and NGOs, and many parties in Bulgaria support us.

Among them is the “Attack” Party, the City Council of BSP in Sofia, the Union of Bulgarian Journalists, etc.

Is there a unity of approach towards your case within power structures and among the political elite of Bulgaria? And also amongst ordinary citizens?

Naturally, there isn’t. As I already mentioned, the President, Parliament and Prime Minister support us. And the Prosecutor has his own view of what is happening.

It is unlikely that the Bulgarian society has forgotten how the currently ruling GERB Party was founded - on money from German funds; on what the America for Bulgaria Foundation exists; how all organizations that campaign in favor of Turkey or other countries that are not members of the EU, function. What we are witnessing is a paradox: to be friends with Russia is not a good idea, whereas being friends with, say, Turkey or America, is good. We find it absolutely unacceptable.

You have been chairman of the organization for 16 years, have there been similar precedents before?

No. There have been a number of tax audits and a lot of individual audits. But a detention of 15 members of Russophile leadership at a time, with searches, handcuffs, though they are witnesses, never. In my opinion, Bulgarian society, the media, Russia, and, little by little, some NGOs as well, have reacted to all this chaos in an appropriate way. Politicians ranging from the extreme right, including some Russophobes, to the extreme left, as well as social activists in Bulgaria - 90% have given it to understand that this is unacceptable and that these kinds of attempts should be doomed to failure. But time will tell who was right.