No More International Law, the US Has Its Way 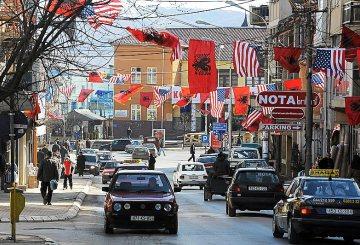 As requested by the UN General Assembly, on July 22 the International Court of Justice issued a ruling on Kosovo independence. The verdict is that the unilateral declaration of independence by “the Pristina administration” was legal, though the UN Security Council Resolution 1244 (the one concerning the territorial integrity of Serbia) still remains an element of the international law that should not be disregarded. The ICJ thus endorsed on the level of international law the Kosovo cessation and unilaterally declared independence (ICJ chairman Hisashi Ovada did state that debates over nations' right to self-determination and cessation do not fit with the ICJ mandate and that it is not the court's mission to assess the consequences of the proclamation of independence by Kosovo or the current statehood of the former province of Serbia).

Rather, the consequences are of interest to the architects of the independence and to the NATO countries. When the ICJ verdict was rolled out, Kosovo's “foreign minister” Hashim Thaci was in Washington, where US Vice President J. Biden reaffirmed the US position that the territorial integrity of Kosovo should be inviolable and that its future lies with NATO and the EU.1 The ICJ sided with those who used force, political pressure, and economic blackmail to foster the Albanian separatism in Kosovo.

The ICJ hearings drew enormous attention worldwide. It is indicative of the potential repercussions of the ICJ ruling on Kosovo's independence that over 40 countries sent their delegations to the court. Not only the range of the international representation, but also the character of the ruling and the role taken this time by China, the country that never got involved in the ICJ decision-making in the past, made the recent 36th ICJ hearings totally unprecedented. Before the verdict was issued, support for the unilateral declaration of independence by Kosovo was expressed by 14 countries (plus, of course, Pristina). On the other hand, 12 countries agreed with Belgrade that the declaration was a breach of international law. Nine of the ICJ judges were from the countries that had recognized Kosovo (the US, Great Britain, Germany, France, Japan, New Zealand, Jordan, Sierra Leone, and Somalia).

Serbia's statehood and sovereignty have suffered yet another blow. Expectations that international institutions – notably, including the UN – are capable of impartiality and professional credibility proved absolutely unwarranted. Belgrade met with no understanding in the EU. Contrary to Serbian President B. Tadic's claims that the EU is eager to cooperate with Serbia on Kosovo, the EU showed with utmost clarity that its position in irreversible and not open to compromise.

First, Brussels is warning Belgrade against demanding that the UN open negotiations on the status of Kosovo. Secondly, Brussels is putting Belgrade under pressure to have the resolution Serbia plans to bring to the UN General Assembly following the ICJ verdict approved by the EU beforehand. Thirdly, it is clear that Serbia's EU candidacy will be contingent on its course with respect to Kosovo, meaning that the promises once lavishly dispensed by the EU bureaucrats that the issue of Serbia's candidacy was purely technical and would be submitted to the European Commission almost automatically should not have been taken seriously. The situation is obviously taking a different turn: the EU will not be able to ask the European Commission to pronounce a judgment of Serbia's candidacy earlier than in December, but even that is likely to be mere propaganda. Former US ambassador to Serbia W. Montgomery outlined Serbia's outlook for the EU membership bluntly – he said Serbia would gain admission to the EU in no earlier than in 2018, but even that would not necessarily materialize.2 Berlin is following Washington's lead: though Serbia submitted a EU membership bid already in December, 2009, Germany decided to suspend the process. The opinion in Germany – and across the EU – is that Croatia is sure to be admitted in 2012 or 2013 but Serbia may yet be shut out in case it chooses to hold its own on Kosovo.3

The EU efforts are being focused on negotiations over “technical issues of mutual interest” between Belgrade and Pristina. The position of the five EU countries denying recognition to Kosovo will be diluted in the opinion of the majority which is coercing Belgrade to forget about talks on the status of Kosovo.

Before the ICJ verdict became known, EU special representative to Kosovo Peter Feith predicted confidently that the ruling would be in Kosovo's favor and that a tide of recognitions of its independence would follow the unveiling of the verdicts.4 Feith evidently meant to highlight the harshness of the position of the EU and other international institutions in dealing with the Serbs and Europe's determination not to take Belgrade's views into account. Even the “Cyprus option” is rejected out of hand – Feith says the Kosovo case cannot be regarded as a frozen conflict.5

The stance adopted by the US is straightforward – it implies full recognition and strengthening the Kosovo independence. On July 22 the IMF (headquartered in Washington) approved a Euro 108.9m financial package of assistance to Kosovo over 18 months, Euro 22.1m of the amount being available to the Kosovo administration immediately. The World Bank has already allocated over $400m to Albania for the coming 4 years: $275m (Euro 214m) is coming from the International Bank of Reconstruction and Development and $150m Euro (116m) – from the International Financial Corporation.

In the meantime the Western and Albanian media are entertaining the idea of territorial exchange – the northern part of Kosovo for the Presevo Valley, a southern region of Serbia with a predominantly Albanian population - which is supposedly offered to Belgrade. Allegations are also made that Belgrade is ready to discuss the demarcation of the border between Serbia and Kosovo.

Pristina enjoyed absolute peace of mind in anticipation of the ICJ ruling. At the moment the Kosovo administration is convinced that getting extra 35 UN-member countries to join the 69 which have already recognized Kosovo independence is not going to be a problem.

Belgrade says that the legitimization of Kosovo separatism will lead to the mushrooming of pseudo-statehoods and will destabilize a number of regions in various parts of the world. Serbia's President B. Tadic also says Kosovo tops the list of his country's priorities. Serbia intends to float a new resolution on Kosovo at the September, 2010 session of the UN General Assembly and, according to Tadic, will never recognize its independence in any form, directly or indirectly.

While Tadic is invoking international law, the opposition in Serbia directs biting criticism at the country's administration for permanent capitulation on Kosovo throughout the two years since its unilateral declaration of independence. It was Tadic who, while pledging to continue the diplomatic struggle over Kosovo, sent Serbian ambassadors back to the countries which had recognized the breakaway province and recognized the Eulex mission with its openly stated mission of strengthening the administrative institutions in Kosovo. Brussels is promoting the doctrine of incorporating West Balkans into the EU, the European prospects for Kosovo being its integral part. Talking of the national interests, Tadic's administration held no parliamentary hearings on Kosovo over the two years, and Belgrade even signed – at the expense of Serbia's national interests - a resolution on Srebrenica at the West's request on the eve of the ICJ ruling.

Given that the UN Security Council's inaction made possible the aggression against Serbia, the creation of a major US military base on a part of the Serbian territory seized by Albanian separatists, and the support of the so-called Kosovo administration by the West, the July 22 ICJ ruling signifies a final phase of the destruction of the system of international law.

The ICJ verdict has overturned Resolution 1244 of the UN Security Council and became a prologue to a new phase of the Kosovo project. The West will do everything to prevent freezing the Kosovo conflict. All of the past plans harbored by Pristina will start to turn into reality. Those include the absorption of the Serb population south of the Ibar River, integration and subsequent assimilation of the Serb population in the north of Kosovo, the export of separatism to the Presevo Valley in south Serbia, the proliferation of Albanian nationalism across the Balkans, and de facto if not de jure unification of Kosovo and Albania. All of the above will be taking place against the backdrop of the West's diplomatic and financial support for the independent Kosovo and its integration into the EU and NATO.