No one owes anyone anything? 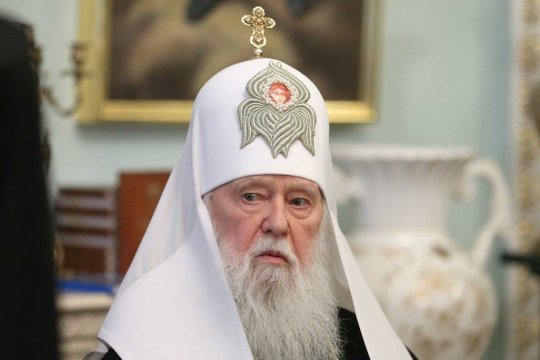 Amazing things keep happening in Ukraine: what we (and many others) had been writing and talking about for almost a year was suddenly confirmed by the most unusual and unexpected source.

According to the Orthodox Journalists Union website, [1] citing Ukrainian radio program “ Persona Grata,” Filaret Denisenko not only rejects the status of “former Metropolitan of Kiev” that Constantinople gave him, but also says that he has never recognized the anathema placed upon him in 1997 by the Russian Orthodox Church, of which he was once a canonical hierarch.

“Well, if the Ecumenical Patriarch removed the anathema from me in 2018, does it mean that I had been under the anathema until 2018?”  Filaret wondered. “If I was under anathema, it means that all these bishops [2] are invalid. As to Epiphany, he is not a Metropolitan; he is not even a priest. If the Ecumenical Patriarch lifted the anathema from me in 2018, then the entire episcopate is invalid!” he added. Thus, by dismissing the Constantinople Patriarch’s meddling in Ukrainian church affairs, Filaret is actually implying that either everyone (including the Ecumenical Patriarch, the Ukrainian Orthodox Church and the UOC-KP) are schismatics and heretics, or no one owes anyone anything now. Then why are we talking about debts? Here is why.

On the surface of it, it might look as if the old intriguer and schismatic is right! The truth, however, lies with the Orthodox Church canons, not with what Filaret is saying. In our October article, titled “Legalizing the Schism - the Patriarchate of Constantinople crossed the red line” [3], we questioned the Ecumenical Patriarch’s decision to “lift” the anathema, both from Filaret himself and his structure and “clerics.” The article also wondered how come   a schismatic under anathema could all of a sudden become “the former Metropolitan of Kiev,” and his associates “the former” metropolitans, bishops and priests. [4]. Our view was fully shared by the Russian Orthodox Church, and also by the Council of the Serbian Orthodox Church, whose position on the issue has been extremely consistent and unswerving: “The Council regrets the canonically ill-advised decision by the Patriarchate of Constantinople to exonerate and officially recognize two leaders of splinter groups in Ukraine as bishops Filaret Denisenko and Makariy Maletich, along with their episcopate and clergy.” [5]

Moreover, Filaret went even further in his statements and exposés.

“Do not call the Ukrainian Orthodox Church the canonical Church, do not state untruths,” declared Filaret, who suddenly started espousing the truth. “It is not recognized by other Churches as canonical, it is recognized only by the Ecumenical Patriarch. It has the Tomos [of autocephaly], but essentially it is not autocephalous. It is not recognized as canonical by 13 Local Churches. So why does it call itself canonical, when no one serves with Metropolitan Epiphany, except the Ecumenical Patriarch?” [6]

According to Filaret Denisenko, “no church, be it the ROC, or those of Hellas, Jerusalem, Alexandria, Serbia, Romania, Bulgaria, Albania, Poland and  Georgia, recognizes the so-called UOC, just like they didn’t the UOC-KP before. Therefore, we should not be bragging about having the Tomos of autocephaly. It has misled us,” Denisenko says, admitting the obvious fact that receiving the Tomos has not brought the Ukrainian schismatics anywhere closer to the single family of world Orthodoxy.

Obviously, the “honorable patriarch” has uttered nothing new and offered no maxims from the annals of canonic law. What conclusions can one make analyzing similar “revelations” being made by this Ukrainian heresyarch? Are they really signs of him suffering from senile dementia? Hardly so – although old and angry, Filaret is certainly not a fool and is just as perfectly versed in canonical matters as are the most diehard advocates of the Patriarchate of Constantinople.

In a thinly veiled threat, “Metropolitan” Epiphany has already hinted that if Filaret and his supporters persist in their efforts to undermine the autonomy of the Ukrainian Orthodox Church (a clear reference to the Church Council scheduled by Filaret for June 20) they could expect “...all canonical and legal consequences.” [8]

Assuming that Epiphany is careful not to openly challenge his former benefactor, Filaret realizes that the only canonical backlash he may face will come from the Ecumenical Patriarch Bartholomew. To Denisenko all this looks very logical, reasonable and legitimate (something he is trying to get across to those who listen): Epiphany and others like him are duly recognized by Patriarch Bartholomew, and since they were all ordained by Filaret, it means that there was no anathema then, therefore Bartholomew never lifted it and so no one owes anyone anything!

Just how the current bickering by these clowns will end we’ll see very soon. And with a great deal of pleasure too since all this squabbling when schismatics keep dragging beards over autocephaly, accusing each other of being pro-Russian and anti-Ukrainian, this gives the canonical Church of Ukraine a much-needed breather. May God extend Filaret’s days, so that he comes up with  something good or says something interesting…

[2] From the UOC-KP “ordained” by Filaret