No Point in Discarding State Capitalism 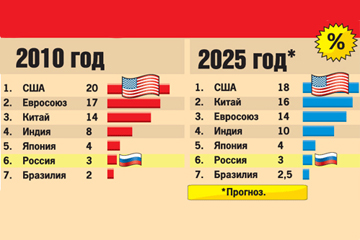 Last June, Russia's series of investment forums presented Moscow with an opportunity to unveil plans for a serious correction of its economic policies, and what seems to be at the bottom line is a radical departure from the concept of state capitalism.  It is unclear at the moment how the shift in priorities will help to improve Russia's economic climate, to make the country a magnet for investments, to boost innovations, or to launch the promised modernization, and personally I see no reasons for heightened expectations. The inefficiency of state capitalism in Russia stemmed from the lack of coherence in implementing the model rather than from the model's real or imaginary inherent faults. The actual causes behind the rejection of state capitalism may be, first, a narrow or archaic vision of the global economy and, secondly, an external pressure exerted on Russia's decision-makers.

Let us start with the second part of the explanation. The US Intelligence Council published a report – translated into Russian in the early 2011 - which portrayed state capitalism as a threat to the existing international order and to the development based on the liberal model: “For the most part, China, India, and Russia are not following the Western liberal model for self-development but instead are using a different model, state capitalism. State capitalism is a loose term used to describe a system of economic management that gives a prominent role to the state. Other rising powers — South Korea, Taiwan, and Singapore — also used state capitalism to develop their economies. However, the impact of Russia, and particularly China, following this path is potentially much greater owing to their size and approach to “democratization.”1. The concern expressed in the report is that “Today wealth is moving not just from West to East but is concentrating more under state control”2.

Importantly, after citing the undeserved riches of the Persian Gulf countries and the recent rise of those of East Asia, authors of the report admit that “In the wake of the 2008 global financial crisis, the state’s role in the economy may be gaining more appeal throughout the world”3. In other words, the message sent by the US National Intelligence Council is that the liberal model, regardless of its deficiencies, must be preserved simply due to the fact that it continues to serve as the basis of the US global primacy.

At this point, one can only add to the above that the list of national success stories attributable to state capitalism is considerably longer than found in the report. For example, as of today it should include Kazakhstan, Malaysia, and Vietnam. A strong presence of state capitalism is also felt in heavily liberalized countries such as Turkey, Israel, Indonesia, and Thailand. Overall, roughly a half of mankind managed to lift itself out of underdevelopment and to move closer to the leaders in the global race by relying on state capitalism, while, in contrast, quite a few of the staggering East European economies are being run in strict accordance with liberal recipes.

It is common knowledge that the past three decades highlighted the fundamental advantages of modern Asia's pattern of economic progress. The pattern can be defined as a combination of the modernization imperative and the practice of state capitalism. The approach produced excellent result in South Korea's, Taiwan's, and Singapore's fight against poverty and underdevelopment, then was adopted by newly industrializing countries including China, and still works at the moment as an efficient strategy for countries lagging behind their peers in economic development. The approach evidently helps to employ market forces in building modern economies with stronger international positions.

Several key traits are common to the variety of Asia's brands of state capitalism. The political stability in the corresponding countries is largely owed to enlightened authoritarian rule, a gradualist treatment of democratization, and general political continuity. Nationalism which features prominently on the agendas of quite a few of the Asian countries readily embraces change and reliance on external resources in the interests of the domestic development. The dynamic character of the Asian economies is sustained by a combination of market play, state stewardship, and purposeful cultivation of national industrial giants. The majority of Asia's economic players are charged with clear developmental missions and loyal to national statehoods. In Asia, banks are extremely active and, in contrast to Russia, the total of credits extended to the manufacturing sector far exceeds that of the bulk of consumer credits.

Compared to the rest of the world, Asian economies seem to boast higher accumulation rates, and the industries' shares in their GDPs tend to surpass the world's average. Extremely selective approach to drawing from the experiences of others, carefully dozed openness, and the ability to combine managerial borrowings and native elements are, no doubt, among the main strengths of Asian economies. Building innovation atop of carefully preserved national potentials is also an intelligent strategy, as, by the way, the 2008-2009 economic downturn irrefutably showed.

Speaking of foreign investments, those who hope to see money poured from the outside drive Russia's modernization should be mindful of the fact that the state capitalism countries are credited with huge success in attracting adapted and therefore exceptionally fruitful direct investments. Such capitals, absorbed mainly by the manufacturing sector, merge seamlessly with national economies and, unlike the notorious hot money, do not flee when difficulties start to loom on the horizon. The relatively immature of the market economies should avoid over-reliance on financial markets and give priority to making credits available to industries, and never believe that cropping financial markets solves all problems automatically. Russia's financial system was largely modeled on the now-embattled US one which focused maximally on consumer credits and mortgages. The result is that reviving demand in the wake of the crisis proves an uphill task since much of the potential demand was used up in the run-up to the economy's nosedive due to unrestrained offer of credit.

In Russia's case, the state regulation of the economy which for the most part took its current shape in the wild 1990ies may be an ugly picture, but this is no reason to discard a proven economic model in the long run. It may be underperforming or even tinted with corruption, but we still need it in place, regardless of what we are told to do.