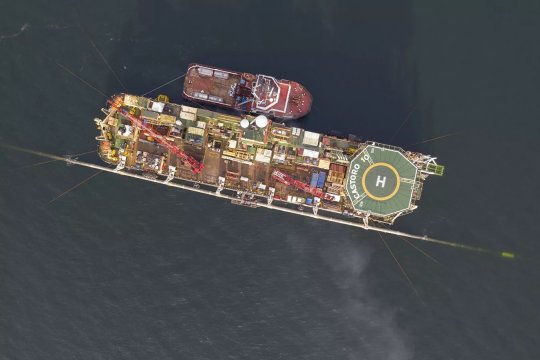 The Nord Stream 2 gas pipeline is quickly turning into major irritant souring relations between the United States and its European allies. For the first time in the recent history of Euro-Atlantic integration, Germany has made it perfectly clear at the highest level that it could introduce sanctions against Washington and could even persuade its EU and NATO partners to act as a united front against the US. The reason for this is the stubborn desire by the US Congress to slap punitive sanctions on the European participants in the Nord Stream 2 project, including both private companies and government agencies in Germany and other countries.

The US news agency Bloomberg recently reported, citing two German officials that Germany is preparing to strike back if the US introduces additional sanctions against the Nord Stream 2 gas pipeline.

According to the agency, the government of Chancellor Angela Merkel is mulling the possibility of calling for coordinated actions by the European Union if Washington goes through with sanctions against the participants in the Nord Stream 2 project. Referring to a statement by the German Ministry of Economics, Bloomberg also emphasized that new US sanctions would hit German and European companies, banks, and government agencies. [1]

Although seemingly calm on the outside, Angela Merkel has clearly toughened her rhetoric nonetheless. In her July 2 address to parliament, she said that Berlin looks at the Nord Stream 2 project in terms of its economic benefits and considers it necessary to complete it. She added that in spite of the threatened US sanctions, Germany will support the completion of the gas pipeline running under the Baltic Sea. She argued that the new extended sanctions being discussed on Capitol Hill in Washington are extraterritorial, and “are not consistent with my understanding of the law.”

“We still believe that it’s right to get the project done,” Merkel emphasized.

A few hours before the Chancellor’s speech in the Bundestag, Minister of State at the Federal Foreign Office Niels Annen told a meeting of the parliamentary committee on economics and energy that Washington’s new sanctions on Nord Stream 2 are unacceptable: “The fact that the US Congress acts as a regulator in European affairs is absurd. Just imagine, if we adopted a resolution on US energy security in the Bundestag,” Annen stressed. According to him, imposing sanctions is not the way to go because what this particular case is all about is more than just relations between Germany and the US, it is about European sovereignty. Niels Annen also welcomed the committee’s stated desire to explain to the US lawmakers its position on Nord Stream 2. [2]

However, Angela Merkel still views US-German relations in a wider context of European and global security. In an interview published recently in several European media, she admitted the possibility of a new geopolitical reality where the United States would not have a leading role: “We grew up in the certain knowledge that the United States wanted to be a world power. Should the US now wish to withdraw from that role of its own free will, we would have to reflect on that very deeply."

Objectively speaking, the positions of Germany and its partners (including Austria) regarding the implementation of the Nord Stream 2 project can be strengthened by differences existing on this issue in the United States itself. Congress is currently considering two options for sanctions, with the most recent one being the mildest of the two. Both bills envision additional restrictions on the use of ships, including for preparing the sites the pipeline will run along, and may also prohibit foreign companies from providing insurance risk assessment services to the Nord Stream 2 project. The main disagreement is about US sanctions against foreign organizations that conduct testing and certification of the pipeline. In a nutshell, it comes down to the fact that a gas pipeline cannot be launched without a final certificate of compliance with all required international standards.

According to available information, in view of the upcoming presidential elections and the worsening domestic situation, most US senators are now gravitating towards a milder resolution in order to avoid aggravating contradictions already existing between the United States and Germany, as well as within NATO as a whole, and also in order not to play up to President Donald Trump, who has recently toughened his stance on Berlin. At the same time, in late June, a group of US senators, including Ted Cruise, Jeanne Shaheen, John Barrasso, Ron Johnson and Tom Cotton, proposed including sanctions on the Nord Stream 2 project in the US defense budget for fiscal year 2020-2021. The authors of the initiative believe that it would fast-track the possible introduction of sanctions, because, unlike a regular bill that can be subject to lengthy discussion, the defense budget is invariably approved each fall. [4]

President Trump has recently been pressing for new sanctions against Nord Stream 2, while simultaneously ratcheting up his criticism of Germany. According to his former National Security Adviser John Bolton, whose book of memoirs came out right amid the current aggravation of the political situation in the US, two years ago, Trump openly threatened to withdraw the United States from NATO because Germany and its allies were implementing  the Nord Stream 2 project. According to Donald Trump's logic, since the US pays Europeans for their safety, Europeans, in return, must buy American liquefied natural gas, even at a higher price.

What happens next will depend on the position of Germany and other European countries wishing to maintain their energy-related cooperation with Russia. Stanislav Mitrakhovich, a senior expert at the Russian National Energy Security Fund and the Financial University, believes that new US sanctions can slow down the project, but without resistance from Europe Washington may go even further.

“If the United States feels that Germany is ready to back off and dance to Washington’s tune, it can still go ahead and introduce tough measures, including against German businesses. If so, the construction might be put on ice simply because the pipes are in Germany.” [5]

Meanwhile, in Germany itself the media has so far refrained from overdramatizing the situation around the completion of the Nord Stream 2 project. Thus, the newspaper Die Welt believes that the project operator has a chance to complete the construction of the pipeline without fearing US sanctions simply by changing the ownership of the Akademik Chersky pipe-laying ship, which has been commissioned to finish the job. The Gazprom Fleet Company could re-register the Akademik Chgersky, which is its only pipe-laying vessel, to the Samara Thermal Energy Property Fund (STIF), which is not subject to possible sanctions. According to the newspaper, the only impediment to the pipeline’s construction could be a ban on most types of work in the Baltic Sea in July-August for reasons of conservation of local fish stocks (protection of cod spawning). [6]

The whole situation warrants a further toughening of rhetoric on both sides of the Atlantic. In a statement, carried by the business newspaper Handelsblatt, two Bundestag deputies - Timon Gremmels (SPD faction’s speaker on gas policy) and Markus Töns (SPD faction’s speaker on trade policy) slammed the US sanctions as "an encroachment on the principle of legality and protection of investments in Europe.” They emphasized that “the threat of tougher extraterritorial sanctions has consolidated the ranks of the German Bundestag. Even the parliamentary factions generally critical of the gas pipeline project see the proposed restrictions as a violation of international law and an attempt to undermine the sovereignty of Europe.”

“We are convinced that the time of diplomatic restraint is now over. To protect European interests, the German government and the European Union should introduce countermeasures and consider the use of retaliatory sanctions, for example, against US shale gas. The real threat of serious retaliatory sanctions is the only way we can possibly resolve the conflict. This is the only language Donald Trump understands,” the MPs stressed. [8]

For Russia, this is creating opportunities for closer trade, economic and political cooperation with Germany and other European countries. Considering the scope of German business involvement in the Nord Stream 2 project and the personal position of Chancellor Angela Merkel, the chances are high that the gas pipeline will be completed and Moscow will be able to benefit from the growing contradictions between the US and Europe.