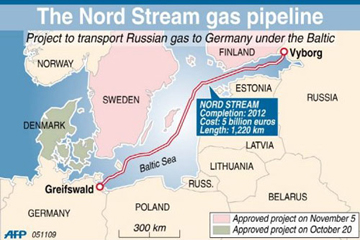 In a clear reference to the Nabucco project, EU Energy commissioner Guenther Oettinger said that Europe would mainly rely on Asian suppliers in its bid to diversify away from Russia. The European Commission's latest plan is to start the Nabucco construction in 2013 and to have the pipeline functional within four years. Recently Oettinger also revealed the project total which he set at Euro 10b or above. In comparison, the cost of the Nord Stream construction was Euro 7.4b. Oettinger admitted, albeit indirectly, that as of today banks are unprepared to pour the giant investments into Nabucco, but attempted to sound optimistic and explained that political coordination on the pan-European level should make it possible to extend to the banks the necessary guarantees. Indeed, when, during the last EU summit, banks gave consent to delete a large portion of the Greek sovereign debt, the impression was that when European bureaucrats' need to be persuasive, they can work miracles. It took just about ten hours of lecturing on the importance of keeping Euro afloat to condition the bankers for an act of self-sacrifice, though, given the state of the Greek finances, sticking to a less altruistic approach could easily leave them with nothing.

The development mirrored Europe's wider governance centralization trend, which is by no means localized in the economic sphere. The author of a brochure published in Germany this year under the provocative title “Dare to Restrict Democracy” built a whole case against the “destabilizing and paralyzing” influence of “the street” on earnest policies2. The views expressed therein are that popular protests put obstacles in the way of essential reforms and blow opportunities for sustainable development, while China's economic rise generally casts a shadow over the advantages of democracy. Greece's reneging on the pledge to hold an austerity referendum and the German elite's allergic reaction to the referendum on the future of Euro are examples showing that the tendency towards imposing obviously undemocratic solutions on societies is rapidly gaining momentum. In the financial sector, governments and banks will certainly do their best to reach some sort of compromise on investments protection which, as applied to the pipeline projects, may, for example, give Nabucco lavish privileges over South Stream.

The European Commission will surely look beyond engagement with Asia for energy diversification. Part of the wider perspective on the issue is the current spin-off of the Desertec project which is supposed to supply 15-17% of Europe's electric power consumption by the middle of the century while also reducing its reliance on hydrocarbons and helping prop up democracy in countries like Egypt, Tunisia, and Libya. Specifically, the plan is to build a network of solar generating capacities in North Africa and the Middle East. When North Africa was still going through a series of painful regime changes, the European Commission passed a document titled “Partnership for Democracy and Shared Prosperity with the Southern Mediterranean”3 which called for creating a community with the region's countries that must be centered around the cooperation in drawing energy from renewable sources. A consortium of some 20 major German companies was already established to implement the Desertec project, but the giant design requiring some Euro 400b in investments will never take off without Brussels' political support.

The start of gas supplies via Nord Stream is an appropriate occasion for an eye-opening discussion of Europe's energy future. Parallel to the recent inauguration in Germany, the A.T. Kearney consultancy rolled out in Berlin a forecast for the long-term natural gas pricing dynamics4. Experts believe that the current 30-40% annual price growth will terminate by 2015 and prices will start to slide as the market will become oversupplied and transit capacities – excessive. By 2020, the pipeline throughput to Europe will increase by at least 65% and terminal capacities will more than double, creating a total of 77 bcm of idle transit capacity. Moreover, LNG import in 2009 and 2010 rose by 11 bcm and 18 bcm respectively against an overall contraction of pipeline gas import and exerted additional downward pressure on prices. If the A.T. Kearney forecast proves accurate and gas prices shed around 60% after 2015, it would be a big mistake for those who invest heavily in infrastructural projects like Nabucco and especially Desertec to overlook the advice to subject their plans to a drastic revision.

The Lubmin inauguration was somewhat marred by the pricing concerns. E.ON Ruhrgas executive board member Hans-Peter Floren  reaffirmed the German company's commitment to existing long-term contracts but added that it would be „seeking more dynamic mechanisms to adjust the contracts to changing market conditions“. According to the financial report for the first three quarters of 2011 released by E.ON Ruhrgas, the company's revenues decreased by 39% compared to the same period in 20105. The situation appears to have improved slightly over the past three months, but the report's emphasis on renewables indicates that the media rumors about E.ON Ruhrgas' intention to follow the lead of its rival RWE by selling its gas distribution grid and shutting down its gas-business subsidiary are far from being  groundless. E.ON Ruhrgas, by the way, happens to be the only Nord Stream partner who declined to post an account of the inauguration on its web site. GDF SUEZ, in contrast, wrote on its site: „Nord Stream is a gas pipeline of strategic importance for Europe. GDF SUEZ is proud to be taking part in this major project. This technical and industrial feat contributes significantly to the security of supply in North-Western Europe where the Group is one of the leading energy providers and supplies both natural gas and electricity to millions of customers“6. German politicians also stressed the European rather than bilateral character of the Nord Stream project. Natural gas from Russia will be supplied to Germany, Denmark, Great Britain, the Netherlands, France, the Czech Republic, and other countries. Federal minister of economics and technology Philipp Rösler said in an interview to Die Welt that Nord Stream serves to further diversify and secure Russian gas transit to Europe, which highlights its status of a European project. He also noted that the pipeline is integrated into the trans-European network and that the list of project partners includes, along with Germany's BASF/Wintershall and E.ON, French  GDF SUEZ and Dutch Gasunie7.

A.T. Kearney team's chief said at the presentation of the gas pricing report: „Can Europe live without Nord Stream? It probably can“. But let us face it: Nord Stream is already online, and now the same question should be asked in connection with completely different infrastructural projects.