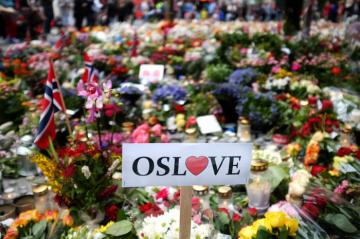 Anders Breivik already seems to have emerged as one of the XX century's top-famous terrorists. Day by day, his popularity visibly grows not only in the ranks of the European radical right but also among the Europeans with otherwise mainstream views.

Grabbing the media headlines, the Oslo and Utoya Island drama steadily overshadows Greece's financial embarrassment, the risk of the US default, or the NATO crimes and rebels' atrocities in North Africa. Even if we buy the idea that - as Breivik and part of the media claim – he acted alone, the timing of the sensational terrorist attack still does not appear to be a coincidence.

The Loner: Superman and Superbrain Combined?

If indeed the perpetrator in Norway is a loner, his Al Qaeda colleagues must at the moment be green with envy: the level of planning and execution of the twin terrorist attack which shattered the country was unprecedentedly high and the implementation costs – unprecedentedly low. The attack time-line is outlined below:

15:26 - A massive blast shook the Oslo government quarters. The bomb measured around 100 kg in trotile equivalent, and experts are still clueless as to the type of the detonator employed.

16:57 — The terrorist wearing police uniform asked a ferryman to transport him to the Utoya Island located in a lake some 35km north-west of Oslo, where a youth camp was organized by Norway's ruling Labor Party and people were gathering in a cafeteria to discuss the Oslo blast. The “lone terrorist” waited outdoors asking everyone to come together to let him supply the latest information about the Oslo incident. After dropping a few reassuring phrases, he opened fire on those around him.

19:30 — The terrorist was arrested by the police, oddly enough, after the shooting spree continued for 1.5 hours.

The whereabouts of the policeman who was supposed to be in charge of the security on the island  hitherto remain unknown. If the terrorist gunned him down, it is unclear how — under the circumstances — he could manage to hide the corps. If the policeman was not killed, his absence presents us with a puzzle.

It quickly became known that Breivik cast his philosophy and plans for the attack into the form of a 1518-page treatise titled “2083: A European Declaration of Independence” and made it available in the Internet. Overall, the 32-year-old Norwegian had to be a terrorist Jack of all trades: an engineer, a chemist, a gunman, and a PSYOPS expert. On top of that, he managed to sustain a lifestyle which – seen at all angles – never evoked suspicion, which evidently took superb conspiratorial and acting skills. His personal record, though, carries no indications that he has had any training in either of the crafts. References to his army service and hunting club membership cannot help to explain away the enigma – his competence is that of a professional saboteur and would take years to build, and this is the kind of training that does not combine with other, non-secret occupations simply due to time constrains.

There are further strange details in the situation, notably. After the emergency call, the police made it to the Utoya Island with a 1.5 delay, meaning that, even if it took, let us say, 30 minutes to prepare, passing roughly 40km cost another hour. This was exactly as long as it took Breivik to cover the distance, but, in contrast to the police, he drove along a road at a time when the traffic was congested. Or was he, in addition to being a shooting, explosives, and acting expert, an excellent car racer?

An Operation Meant to Divert Attention

On July 22, 2011, shortly before the Oslo drama, NATO committed a terrorist act against Libya by bombing a water supply station in Brega. Six station employees were killed and one of those injured was the director of a company manufacturing pipes for the water supply system which keeps afloat the agriculture of Libya, a country with much of the territory being a desert, and feeds water to 70% of Libya's households. On July 23, a NATO strike left in ruins the plant making the water supply pipes. Estimatedly, reviving is going to take a couple of months. Quite likely, the terrorist attack in Norway was meant to divert the public attention from the terrorist acts pulled off by NATO in Libya and from the ongoing genocide against the people of Sahara. Similarly, the operation which culminated in the death of Bin Laden trailed the vicious NATO killing of M. Gadhafi's son and grandsons.

More or less at the same time, the US President, Senate, and Congress failed to strike a deal on budget cuts and national debt ceiling, prompting fears of a US default after the US government reaches the limit of its statutory borrowings authority by the August 2 deadline. Even the news that Washington is on the way to getting a new legislative body – a Super Congress of 6 senators and 6 congressmen from America's both parties1 – largely went unnoticed as Norway's terror drama dominated the media coverage.

The Media Backing of the Terrorist Attack

1. Breivik's “2083: A European Declaration of Independence” swept across the Internet. The document details the preparations for the terrorist attack along with the techniques employed and costs incurred: “I have just completed the “explosives research phase” and have summarized several new chapters for the compendium. My rifle application came through and I have now ordered a 800 Euro silencer specifically created for automatic and semi-automatic rifles. The Ruger Mini 14 costs about 1400 Euro including a customized trigger job from the gun smith. I will have to buy a new stock with picatinny rails (400 Euro) and 30 bullet factory mags (60 Euro per mag) from a US supplier”. It might seem outrageous that access to such posts was not blocked in the wake of the attack, even though technically this should not have been a problem.

2. Key international developments – the Greek debt problem, Italy's economic difficulties, the war in Libya, the threat of the US default – synchronously receded from the media discourse. While focusing on the coverage of the terrorist attack was a natural media reaction, ignoring whatever else clearly was not.

3. The media supply practically no details concerning the terrorist attack. The coverage tends to be saturated with emotions but leaves audiences largely uninformed about how the drama was unfolding and offers no conclusions of any kind. You can run across expressions of gratitude to British experts on explosives but can't grasp what exactly exploded or how the device was detonated.

An Attack Coming at the Right Time

Various forces will be trying to capitalize on Norway's bloody drama. Interestingly, the European Commission championed the cause. Breivik left a thorough description of the costs of the bomb ingredients, the result being that the EU rushed to impose regulations on the sales of chemicals that can be mold into explosives. “The European Commission will speed up the introduction of new regulations on chemicals sales after a Norwegian extremist who killed 76 people in last week's bombing and shooting spree admitted he used fertilizers to make explosives”, EC spokesman Michele Cercone said on June 26. The statement seems to indicate that the regulations already existed in a draft form and the terrorist attack only caused the European Commission to speed up their introduction. One can only guess what chemicals will be blacklisted, but in fact Breivik's manifesto contains a mentioning of two acquisitions via a Polish online store in 2010. According to Poland's Internal Security Agency (ABW), the chemicals bought by Breivik and the corresponding amounts were completely legal. Breivik made another acquisition – 6 tons of fertilizer from Felleskjoepet Agri - last May. The supplier later said the parameters of the order were completely usual for an average farm, though the possibility of using certain types of mineral fertilizers to make explosives is a well-known fact. Considering that Potassium nitrate routinely serves as the explosives component, the coming EU directive can tilt seriously the balance on the fertilizers market and the terrorist attack in Norway can bear considerable effect on Europe's or even global food security.

In the wake of the terrorist act, Norway took certain steps towards re-establishing entry control at its borders, though, considering that the terrorist was a Norwegian, that should have  been a logical option for its neighbors. By the way, Norway is the second European country (after Denmark) to revert to entry control over the past month.

The trial of Breivik promises to give the spread of right-wing radicalism a huge boost. Breivik's case fits neatly with the recent tendency of retrenchment from multiculturalism recognized by a number of EU politicians. For example, leader of the French far-right Marine Le Pen expressed a view that multiculturalism inevitably provokes “multiconflicts” and that getting rid of the burdensome European Union should pave way for a new Europe stretching from Brest to Vladivostok and based on the advocacy of national interests.

Today's Europe is looking for a way to get out of the trap into which it has knowingly maneuvered itself. The openness of Breivik's trial may easily translate into propaganda of his world view, and if he stays alive by the time the trial opens, he has a chance to assume the role of a new Horst Wessel, an early Nazi activist posthumously venerated by the German fascists. The trial of Breivik will be a bifurcation point for the EU: trying him openly would be tantamount to broadcasting his ideas, and limiting the publicity of the trial would make him look like a martyr. In any case, the trial has to take place...