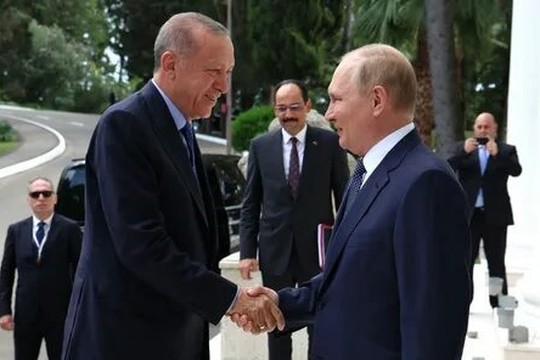 The Turkish press writes in detail and with a certain optimism about the results of the recent Russia-Turkey talks in Teheran and Sochi.

Türkiye-Russia talks on Syria to bring relief to region: President Erdogan, insists “Turkiye Newspaper”. "I believe that our handling of the developments in Syria on this occasion will also bring relief to the region," - Recep Tayyip Erdogan said ahead of a bilateral meeting with his Russian counterpart Vladimir Putin in the Russian coastal city of Sochi.

Erdogan also said Türkiye values cooperation with Russia in the fight against terrorism.

On the Akkuyu Nuclear Power Plant, a joint project of Ankara and Moscow, Erdogan stressed the project’s importance, ruling out any postponement. "Because it’s very important that the agreed-on calendar works and that Akkuyu is completed at the specified time. Because Akkuyu Power Plant will handle 10% of Türkiye's energy potential in energy supply, and I believe it would be beneficial for us to have a detailed discussion of this issue," he added.

Turning to natural gas, Putin said: "TurkStream, whose construction we completed some time ago, is one of the most important arteries for supplying Europe with Russian gas." He stressed that the European countries should be grateful to be able to buy Russian gas via Turkish Stream. This 930-kilometer (578-mile) pipeline will transport Russian gas under the Black Sea through Bulgaria, Serbia, and Hungary, with another section reaching Türkiye.

During the Tehran and Sochi talks, important decisions were also taken on the Syrian field. Turkey together with Russia, Iran and Syrian authorities offered a joint operation against the “pirate state structure” in the east of the country.

Moreover  it is stated that a “Gulf country” and another “Islamic country” are conducting diplomatic traffic with both sides for the Erdogan-Assad meeting. Though it was noticed that Ankara says it is "too early", the meeting nevertheless “could take place at a telephone level”.

Samir Hafız, one of the Syrian politicians and the former President of the Turkmen Assembly, stated that the Ankara-Damascus tension caused losses not only to Syria and Turkey, but to the entire Islamic world.  He said: "The Ankara-Damascus bracket that was opened 12 years ago should be closed immediately."

The return of refugees was among the most important topics in Turkey's talks with Iran and especially Russia. Demanding the development of the scope of the amnesty laws announced by  Damascus to be carried out under international supervision and surveillance: the release of political-opposition prisoners, the cancellation of the criminal lists of tens of thousands of people, the return of the Syrians who left the country by updating their house, land and workplace titles, including the civil service.

This project is strongly supported by the EU and the Gulf bloc. If the project carried out under the leadership of Turkey will be successful, at least 400,000 Syrians from EU countries, the Gulf, Lebanon and Egypt are expected to return to their country.