Nuremberg lessons - «We must remember» 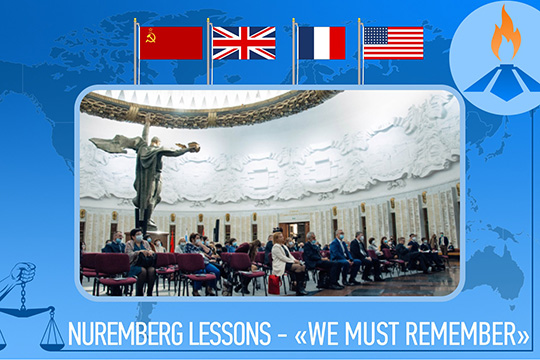 Lessons from Nuremberg", timed to coincide with the 75th anniversary of the beginning of the international tribunal over Nazi criminals, has ended in Moscow. There were nine thematic platforms at the event, where more than 150 speakers took part.

The experts voiced obvious arguments that the impact of the Second World War on the modern world was so significant that its results are being considered anew, the generally accepted truths are being revised. This is also evidenced by attempts to belittle the decisive contribution of the Soviet Union to the defeat of Nazi Germany, to forget the feat of the Red Army soldiers, and outright falsifications. Military history museums are fighting to preserve the historical truth. This is possible only thanks to historical facts and documentary evidence.

The Minister of Science and Higher Education of the Russian Federation Valery Falkov in his speech raised topical issues: “The Nuremberg trials are a real historical fact, and if you are studying to be a historian, political scientist, or a lawyer, you equally cannot consider yourself an educated person if you you don’t know these historical facts, and you don’t know how it can and should be interpreted ”.

The minister noted that a person can correctly imagine how national legal systems work and how they work, and what international law is for, if he is familiar with such a phenomenon as Nuremberg: “A political scientist cannot assess what is happening inside the country, skillfully judge, reflect and call oneself an expert on domestic policy, and even more so, swing and assess what is happening along the outer contour, if he does not know what “Nuremberg” is and what role he played ”.

The minister noted that what is happening today is directly related to what was 75 years ago. In his opinion, our country would have had a completely different history if there had not been a legally significant document from the Nuremberg Tribunal.