Oil and Blood in Libya 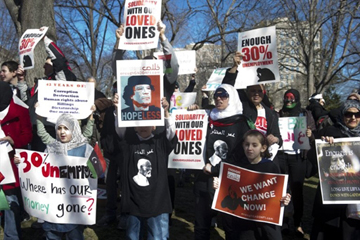 The themes of oil and blood are interwoven in the recent developments in Libya. The country's oil reserves are estimated at 46.4 billion barrels and its oil export generates impressive revenues which are generously dispensed to prop up the living standards of the 6 million population. As of 2010, the annual par capita GDP in Libya measured slightly under $19,000. On the other hand, Muammar al-Gaddafi's Libya is a patchwork of relatively prosperous and totally impoverished areas, and the country's national wealth is distributed selectively, mostly benefiting the supporters of the current regime. One of Libya's worst socioeconomic ills is widespread unemployment which reaches 30% among the younger people.

Muammar al-Gaddafi, an army captain at that time, seized power on September 1, 1969 and headed the Revolutionary Command Council which deposed Libya's senior-aged King Idris in a bloodless coup. The coup later referred to as a revolution replicated Egypt's 1952 one which propelled to power an Arab nationalist leader and  al-Gaddafi's ultimate hero Gamal Abdel Nasser. Subsequently the Revolutionary Command Council faced a tide of internal strife which was attributable to problems in interpersonal relations in its ranks rather than to any serious ideological differences, and many of the officers who used to be the Council members switched to the opposition including its Islamist wing. As for al-Gaddafi, he gradually convinced himself of his great ideological mission and invented the Jamahiriya, an Arab brand of democracy which was supposed to serve as a prototype of the whole Arab world's future political arrangement. In accord with Jamahiriya's underlying concept, elections should be a mechanism of forming all parts of a country's administrative system including, for example, ministries, which in the case of Libya were renamed people's committees. It remains unclear up to date  how the plan is supposed to be put into practice.

The recent unrest began in the east of Libya on February 17 in Benghazi, the main city of what was known as the Cyrenaica province in the epoch of the Italian colonial rule, and culminated in two days when the army used force to restore order. The death toll quickly rose to dozens of people,  with hundreds injured. Reportedly, guns for hire from Africa were involved in the fighting. Benghazi is Libya's second-largest city and the regime's perpetual headache as a center of clan-based dissent. The uprising promptly spread to Al Bayda, Tobruk, and Ras Lanuf, a Mediterranean city which functions as Lybia's oil outlet. According to current reports which are likely overstated, at the moment Benghazi is fully in the hands of the opponents of the regime.

On February 20, protests erupted in Tripoli where the insurgents met with resolute resistance mounted by law-enforcement agencies and both sides suffered numerous fatalities. Rumor had it that al-Gaddafi fled to Venezuela, but he personally disproved the allegations. Al-Gaddafi put to work in Tripoli the scheme formerly employed by Yemeni president Ali Abdullah Saleh: aggressive crowds of the regime's supporters also took to the streets to uphold their cause. Libya thus found itself on the verge of a civil war, and, moreover, several influential tribal leaders expressed support for the protesters. Akram Al-Warfalli, a leading figure in Libya's largest Warfalla tribe said he no longer regarded al-Gaddafi as brother and demanded that he leave the country. Shaikh Faraj al Zuway of the eastern Al Zuwayya tribe threatened to cut off the oil supply to the West unless the regime stopped committing acts of violence within 24 hours.

In response, Muammar al-Gaddafi's son Saif al-Islam warned in a televised address that the regime would keep fighting till the end. Muammar al-Gaddafi sounded even more assertive in an almost an hour-long February 22 broadcast. With obvious success, he summoned his supporters to the streets to defend the achievements of the revolution and said that as a fighter, a revolutionary, and a Bedouin he was ready to die as a martyr but would never capitulate. Al-Gaddafi stressed that the pattern set by the presidents of Tunisia and Egypt who gave in to pressure easily was not for him, denied ordering the army to shoot, but stated that he would do so if necessary and even threatened to execute army commanders for defiance. Both al-Gaddafis blamed the outbreak of protests on the West and the Islamists all at once, and al-Gaddafi the son even claimed that an Islamic Emirate had been established in Al Bayda since the unrest began.

The situation in Libya remains fluid, and the sole clear-cut conclusion as of today is that the upheaval exposed major flaws in al-Gaddafi's system of governance, especially in its part concerning the relations between the central authority and the tribes. A potential scenario for Libya is a disintegration into three separate entireties from which the country was originally assembled by the Italian colonizers: the Cyrenaica, Tripolitania, and Fezzan with a center in Sabha. Separatism fueled by the hopes to capitalize on the redistribution of national wealth is alive in every one of them, and that is the source of the main peril the oil-rich Libya is confronted with.