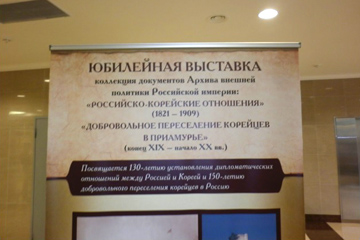 The Russian-wide union of Koreans has prepared an exhibition based on the materials illustrating key pages of the history of the Russian-Korean relations, the Korean nation's history, the first contacts Koreans maintained with the Russian and other peoples, the foundations of Russian democracy, and the history of Koreans in Russia.

The exhibition is centered around two key events – the 130th anniversary of the establishment of diplomatic relations between Russia and Korea and the 150th anniversary of the Koreans' first settlements in Russia. The Russian government  stressed the importance of both historical developments back when the 140th anniversary of Korean settlements in Russia was celebrated. It attests to the significance of the current exhibition that it has been jointly organized by the Ministry of Foreign Affairs of the Russian Federation and the Russian-wide Union of Koreans. The documents presented to the audience are indeed remarkable and open up new aspects of the theme even though it has been explored in depth in the studies by prominent historians Boris Dmitrievich Pak, Bella Dmitrievne Pak, Park Chung Hyo, A.L. Narochnitsky, corresponding member of the USSR Academy of Science Kim George, etc.

The exhibition comprises two sections. The first one is based on the Russian Empire's collection of documents from the 1821-1909 foreign-policy archive for Russian-Korean relations. The corresponding materials portray the events pertaining to almost a century of the Russian statehood and give a good idea of the talents of the diplomats who performed their duties in the framework of a school of diplomacy which, while still in its formative phase, had to handle serious contradictions between major powers. The collection includes around 30 documents of the Russian Empire's Chancellery such as the correspondence to and from the Russian diplomatic corps in Seoul, letters of credence of ambassadors, reports, contracts, etc. The exhibition displays the main document which marked the starting point of the Russian-Korean diplomatic relations, namely the Trade Treaty signed on June 25 / July 7, 1884 and the Regulations for Russian Trade in Korea.

Part of the collection consists of the correspondence between Russian diplomats who, at the time, served in Korea, China, and Japan. The names on the historical list are P.A. Dmitrievsky, A.N. Shpeyer, A.I. Pavlov, and, of course, Carl Ivanovich Weber, a prominent Russian diplomat and Moscow's first envoy to Seoul.

Carl Weber spent 12 years working in Seoul, was accepted by the Korean establishment, enjoyed a reputation of a person knowledgeable about Asia as a whole, and made an invaluable contribution to the development of the relations between Russia and Korea in an epoch which was extremely difficult and occasionally turned tragic for the latter.

For the first time, the Russian audience has an opportunity to take a look at the letters of credence issued by the Korean Emperor to his Envoys Extraordinary and Ministers Plenipotentiary Min Yong Hwan and Lee Bom Jin who became Korean envoys to the Russian court.

The second part of the exhibition shows the collection from the Russian Empire's foreign policy archive on the voluntary settlement of Koreans in the Amur River province in the late XIX – early XX centuries. Its scope spans 1866-1915, the total volume counting 19 documents such as the correspondence between the Asia department of Russia's foreign ministry and the governors of the Far East and East Siberia districts concerning the Koreans' moving to Russia, foreign ministry records on licensing the employment of Koreans in the commercial seaport of Vladivostok, lists of Korean citizens residing in the Amur River province, their applications for the Russian citizenship, and the data on Korean schools run by the parishes of the Vladivostok eparchy.

An exhibit of exceptional historical value is a report by the diplomatic officer from the staff of the Amur River province's governor to the first department of Russia's foreign ministry on organizing a committee for the celebration of the 50th anniversary of the Koreans' moving to the region. The report contains a detailed plan for the celebration scheduled for September 21, 1914. Koreans who know Russian would probably read with interest a draft of the report by the Russian minister of foreign affairs to the parliament suggesting terms on which foreign nationals were to be allowed to settle down in the Amur River and Irkutsk provinces and on the contribution of the incoming Korean population to the agriculture of the area. The paper praised the Korean settlers in various regards and stated that their political loyalty – in the sense of their harboring no allegiance to hostile countries or any alien national-political doctrines -– had been completely assured.

Speaking of the archive collection in general and its significance from the research perspective in particular, it is clear that the materials should be of interest to Russians and even the wider international community along with Russia's ethnic Koreans. Indeed, the exhibition, can be viewed from the global standpoint. For instance, around 2,000 Koreans are permanent residents of today's Ukraine plus at least 30,000 hold jobs in the country on a temporary basis as engineers and workers. A glimpse of the history of Russian – Korean relations highlights the continuity of the key principles of the foreign policy pursued by the Russian Empire, the USSR, and the post-Soviet Russia. The priorities of the policy across various epochs are respect for the sovereignty of other countries, protection of territorial borders, cooperation and assistance, and, as necessary, the hosting of refugees by Russia. The case of the Koreans in Russia fully exemplifies the above.