While ties between India and Russia continue to scale newer heights following an informal summit last year, more and more Indians are being exposed to rich Russian culture. The spacious exhibition halls of Lalit Kala Akademi in Kota (Rajasthan) was the last venue hosting a moving art symposium “Opening Russia-2019”, which took place in January - February in several cities of Rajasthan, West Bengal and, of course, in the capital of India – Delhi, where the two-month art marathon started at Arpana Fine Arts Gallery at the very end of December. A touring exhibition of paintings and graphic works by modern Russian artists was only one part of the “Opening Russia-2019” which included a plethora of collateral events: presentations, master classes for university and college students, art-talks, meetings with the heads of galleries and museums, academic visits to the administration of educational institutions, meetings with teachers of creative universities, participating in art festivals as guests of honor, visiting workshops and artist’s studios. 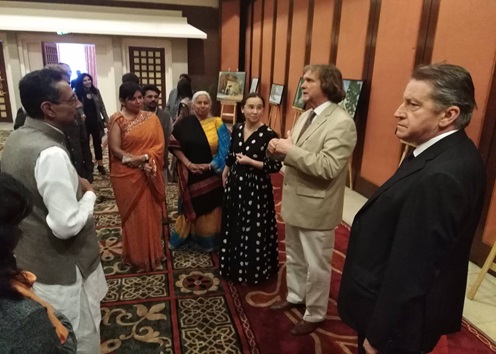 The art symposium held in India in the winter of 2018-2019 became a crowning event of the three-year-long efforts undertaken by the St. Petersburg Center for Humanitarian Programs with the support of the Russian Embassy in India, Indian Embassy in Russia and the Russian Center of Science and Culture in New Delhi to make their own contribution in the further development of cultural and friendly relations between the peoples of India and Russia. On February 2, 2019 the exhibition opening in Jaipur was headed by Russian Ambassador H.E. Mr. Nikolay Kudashev and the Minister of Tourism (Rajasthan) Mr. Shri Vishendra Singhji Bharatpur. In the address sent to the organizers and guests of the “Opening Russia” the Ambassador said: “Our nations have always had mutual respect and a special kind of affection towards each other. [..] It is well known that art has a unifying force. I am confident that the travelling exhibition “Opening Russia” will further contribute to making our nations even closer.” 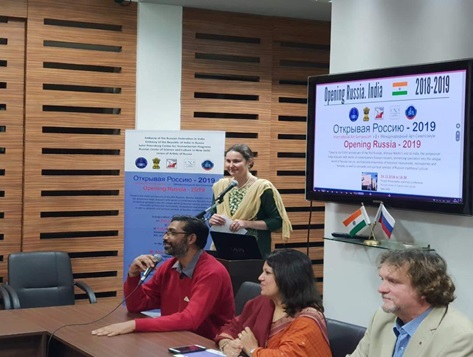 In the past two years six exhibitions of Russian and Indian artists took place in Delhi, Chennai, Mumbai and Moscow. In April 2018 with the support of the International Roerich Memorial Trust, an open-air session was held for Russia artists in a unique place - the estate of the Roerich family in Naggar. In the summer of 2018, Indian artists came to Russia to take part in the “Russian Atlantis” plein air marathon in the small towns and cities of the Golden Ring. The events held in the past two years enabled the implementation of a new, more comprehensive project in terms of number and geography in the winter of 2018-2019. The founder and director of the St. Petersburg Center for Humanitarian Programs Vitaly Vasiliev believes that art has a powerful appeal to everyone and its impact on policies, governments and people is far-reaching and everlasting.  “Diplomacy requires peaceful means to stimulate continued conversation and what can be better than art? It’s a remedy that can treat any condition, quickly and accurately”, he says.  Moreover, due to its Indian co-organizers - Aakshat Sinha of Untitled Creations and Shryansy Manu of Shryansy Art International, the project has reached a new level. In each city, the project was supported by the local partners who acted as curators and sponsors:  museums, modern art galleries, hotels have become exhibition venues.

Delhi-based artist and curator Aakshat Sinha is not new to international cultural exchange projects - in the past two years, he has brought contemporary Indian artists to Russia twice - although he is convinced that there is a visible need and a vast field for such projects, especially aimed at the younger generation. “Our exhibitions were very well received by both the local patrons and the local audiences including the official guests and bureaucrats. The master classes revealed that there is scant knowledge of even basic details about Russia and Russian art and culture among the younger generation. India and Russia are old friends but there is a need to come out of our nostalgia and be aware of who we are 'today' - as friends and as strategic partners. I am happy to have been associated with the program and look forward to our forthcoming joint projects.” 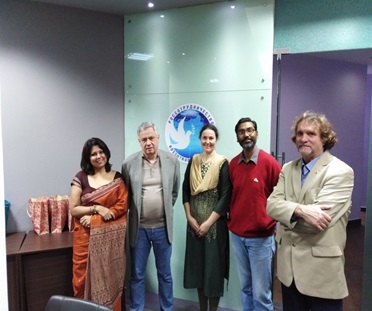 The joint Russian-Indian team of the “Opening Russia -2019”

Irina Dashevskaya, the coordinator of the St. Petersburg Center for Humanitarian Programs, says that the practical contribution of the Indian partners was no less important than their organizational involvement: “During our art-marathon across India, we managed to work with different audiences and age groups. We were lucky to have our Indian co- organizers and business partners participate in the master-classes as facilitators for interactive art- talks, discussions and games. Surprisingly as it may seem outside Delhi the students often lacked English language proficiency necessary for professional communication. Nevertheless, the project attracted a lot of interest and we have had a lot of applications filled in Hindi.” 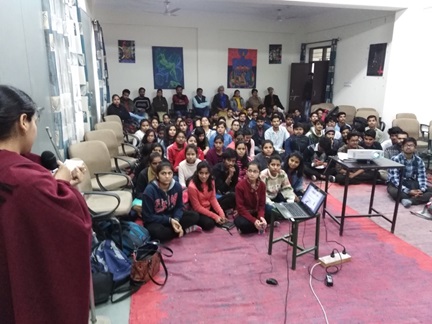 Using an intrinsic value of art, the project fosters cultural relation between the two countries: a painting has the power to shoot from the pictorial canvas and get straight into the heart of a viewer. The exhibition allowed a broad audience to discover the beauty of Russian nature, architectural marvels of the old cities, the serenity of monasteries and Russian spiritual symbolism. A revolutionary discovery can happen instantly even for those who had not heard much about Russia– be it a student in Rajasthan or a participant of a camel festival in West Bengal. 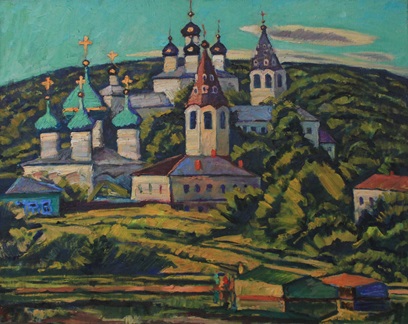 Speaking about the educational potential of the “Opening Russia- 2019”, Irina Dashevskaya emphasized the project had an ultimate goal to popularize academic, realistic forms of art and to introduce participants to the basics of Russian history and culture.  The team usually cooperated with local artists to teach composition, drawing and painting, but carrying the general information about Russia proved no less important: “A quiz that we offered at the master–classes included various questions on geography and culture of Russia as well as Indian-Russian ties in the past and present. It has become obvious that the audience terribly lacks even basic knowledge about Russia”, she said. 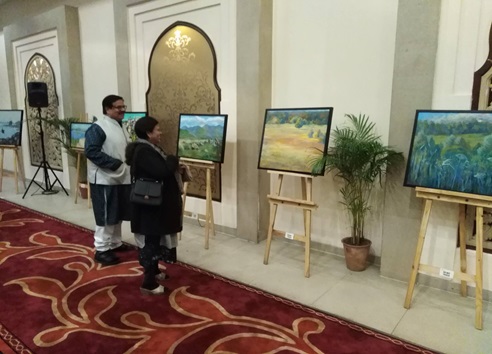 At the exhibition space in Jaipur

By modest estimates a total of five exhibitions, eight press conferences and interviews with journalists, thirteen business meetings and academic visits, six master classes and presentations for students and schoolchildren, eight meetings in artists' workshops were held in all destinations. Irina Dashevskaya also mentioned that after the trip around India some innovations would be introduced to the educational programme. During plain air sessions offered by the Saint-Petersburg Centre of Humanitarian Programs all participating artists will have a chance to study basics of art-management and social projects. 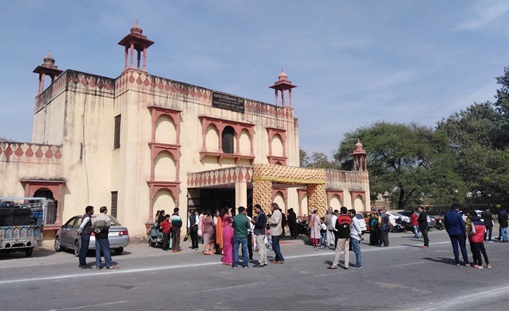 The organizers and participants of the project hope that their work, exhibitions and creative meetings, in addition to the joys of aesthetic quality, will also contribute to the fulfillment of an important educational mission - to serve the spiritual and moral improvement of society and strengthening friendly ties between peoples of the two countries.