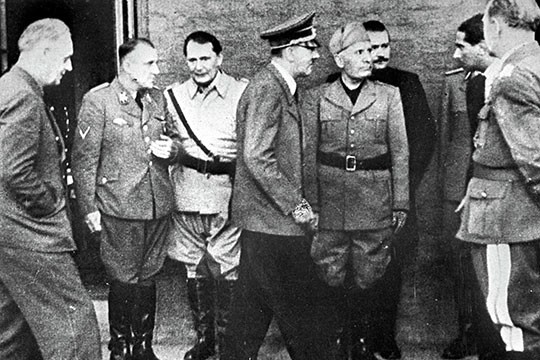 July 20, 1944 is remembered as the day when an unsuccessful assassination attempt was made on the life of Nazi Germany's leader Adolf Hitler.

Notably, within the Reich itself, the codename of the operation – 'Valkyrie' – was used to refer to a plan meant to protect Germany's administrative and military facilities as well as other critical infrastructure in the event of uprisings and other contingencies. The plan was to be executed by the forces of the so-called 'Replacement Army', based in Germany's interior regions. Its most valuable and combat-ready units were concentrated in and around Berlin.

From 1943 onwards, preparations for Operation Valkyrie were handled personally by Deputy Commander of the Replacement Army General Friedrich Olbricht, an active member of the anti-Hitler conspiracy. Interestingly, the Führer himself approved the plan, and its development was carried out with Hitler’s knowledge.

There was a special caste among those opposing the Nazi Party and Hitler which included the old Prussian military, i.e. the Junkers, and influential German politicians. Interestingly, many of them were at first supportive of the ideas of the NSDAP and contributed to the formation and consolidation of the Third Reich. Consider the 1939 letter that Colonel Claus von Stauffenberg, one of the masterminds behind the failed assassination attempt on Hitler of 20 July 1944, wrote to his wife from occupied Poland: "The inhabitants are an unbelievable rabble, very many Jews and half-breeds, the kind of people who surely are only comfortable under the whip. The thousands of prisoners-of-war will be good for our agriculture. In Germany they will surely be useful. They are hard-working, compliant and cheap." It’s easy to imagine the kind of views held by this man.

Furthermore, the conspiracy was actively supported by a number of prominent figures, such as Hjalmar Schacht, a major banker who had been, in many ways, the architect of Germany's economic miracle in the pre-war years; former Prussian Finance Minister and head of Deutsche Bank Johannes Popitz; diplomat Ulrich von Hassell and a number of other senior public officials; Admiral Wilhelm Franz Canaris, head of the Abwehr (German military intelligence and counterintelligence service), and several of his subordinates.

Still, senior military officers were the backbone of the conspiracy, such as Field Marshal Erwin von Witzleben and Walther von Brauchitsch, Generals Göpner, Beck, Halder, von Tresckow and several others. There were also many military men of lower ranks, including Colonel Claus von Stauffenberg. In the military, there were many who refused to join the conspiracy, but knew about it and tacitly supported the coup, for example, the famous Field Marshal Erwin Rommel aka 'Desert Fox' and the equally famous former commander of Army Group Center Field Marshal Fedor von Bock.

The political views of the conspirators deserve special mention. If you assume that these people were on the 'good' side of history and meant to reverse Germany's policies, you are sorely mistaken. Most of the old Prussian Junkers were advocates of strict monarchy; they were nationalists and warmongers. The fact that Hitler's rule did not appeal to them did not mean they would not have arranged separate talks with the Allies to conspire against the USSR, and that is something that even the most hardline Nazis were discussing by the end of the war. Alternatively, they could have carried on with a 'stealthier' genocide of the 'non-Aryan' races.

Be that as it may, around 7 a.m. on July 20, 1944, Claus von Stauffenberg, accompanied by his aide, flew to a meeting at the Wolf’s Lair, Hitler’s military headquarters in East Prussia. Upon arrival, the colonel, complaining of poor hearing as a result of a wound, asked for a seat closer to the Führer. In his leather briefcase he held a bomb equipped with a chemical fuse. A glass ampule with acid, once cracked, was to trigger the device with a 10-minute delay. After placing the briefcase under the table, as close as possible to Hitler, the colonel left, saying he needed to make an urgent phone call. He quickly left the headquarters; the guards did not detain him. At 12:42 p.m., the bomb exploded. Since because of the heat, the meeting had been set in an open-air summer room rather then inside the bunker, the colonel was able to witness the blast and was convinced he was successful. Little did he know that one of the officers, Lieutenant Colonel Brandt, took his place and moved his briefcase behind a solid oak table which saved Hitler by taking the brunt of the explosion. Four officers were killed, many were shell-shocked and wounded, but the Führer himself, as if by some demonic stroke of luck, escaped with a few scratches and a minor concussion.

After that, the events unfolded quickly. The conspirators attempted to scramble the Replacement Army force and take power in the capital into their own hands. With Stauffenberg convinced of the success of the bombing, the insurgents acted as if Hitler was no longer alive. Сommander of the Replacement Army Friedrich Fromm was arrested, and the army units started to occupy Berlin as per the Valkyrie plan on the orders of Olbricht. A major miscalculation was made, however: the communications blockade of Hitler's headquarters failed. The SS lines of communication remained operational, and the military channels were quickly re-established. Field Marshal Keitel called Berlin from the headquarters and confirmed that Hitler was alive. This fact alone made many of the hesitant officers reconsider further action. Major Otto-Ernst Remer, commander of an elite battalion, played a major role in stopping the coup. At a critical moment, at about 7 p.m., Remer arrived at the apartment of Joseph Goebbels, the Nazi minister of propaganda. The Minister put him through to Hitler by telephone; Hitler ordered Goebbels to crush the insurgency and promoted Remer to the rank of Colonel. Remer obeyed. Commanding from Goebbels' apartment, he scrambled his battalion and some other units, and they quickly took control of the city, including critical buildings and the Ground Forces headquarters where the conspirators were located. Also, when Fromm learned that the Führer was still alive he tried to arrest the conspirators, as he only agreed to help them on the condition that Hitler was actually dead. However, Fromm himself was apprehended. The staff officers, led by Colonel Gerber, demanded answers from the conspirators; a firefight ensued, and Stauffenberg was wounded. By 11:30 p.m., it was all over. Fromm and his officers arrested the rest of the conspirators.

The aftermath of the failed coup, which could theoretically have ended the war, was appalling: nearly 5,000 people were executed, including senior military officers and public officials. Many of them, like Rommel, who had essentially taken no part in the conspiracy, paid for it with their lives. More than 7,000 people were arrested; people were executed by guillotine and hanged by piano wire attached to a meat hook bolted to the ceiling. Hitler insisted that the rebels were to be 'slaughtered like cattle'.

Stauffenberg, Olbricht, Beck, and a number of other plotters were shot by Fromm immediately, on the night of 20-21 July 1944, in the courtyard of the Replacement Army headquarters. Fromm, who had tried to cover up his tracks and eliminate all witnesses, was arrested anyway and later executed. The first group of men executed included 1 field marshal, 19 generals, 26 colonels, 2 ambassadors, 7 other diplomats, 1 minister, 1 industrialist, 3 state secretaries, the Berlin police chief and the chief of the Reich's criminal police. The purges continued until the end of the war and the death of Hitler himself.

Today, the July 20 plotters are considered national heroes in Germany. They are honored as fighters for freedom and human rights and glorified through countless films and books. Historian Heinz Lamowski, a former employee of the GDR State Archives, notes: "...Public opinion has over-idealized the conspirators. In modern Germany, streets are named after them, monuments have been erected to them. Many forget that the ultimate goal of the plan to kill Hitler was to negotiate peace with the allies in the West in order to wage war against the Soviet Union. One of the leaders of the conspiracy, General Ludwig Beck (if the assassination were successful, he was to become President of Germany), said, “The Reich will be saved by uniting with the Americans in the fight against Bolshevism.” Former burgomaster of Leipzig Carl Friedrich Goerdeler, who was to become Chancellor, wrote in his diary, “After Hitler is removed, the Russians will be unable to take Berlin. Among the conspirators, there were many ardent enemies of Nazism, plenty of monarchists and nationalists, but there was not a single supporter of the Soviet Union.”