Opinion from Germany: BRICS is stronger than G-7 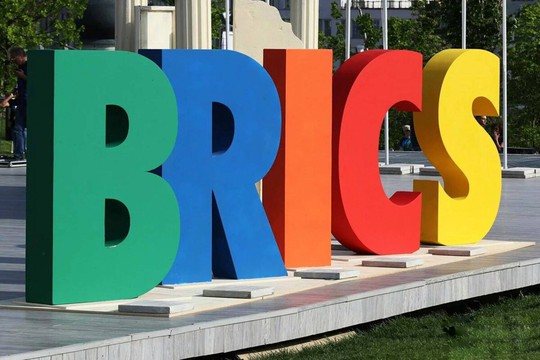 BRICS is stronger than the "anti-Russian "Big Seven"," Stefan Aust, former editor-in-chief of the leading German magazine Der Spiegel, is sure. In the newspaper Welt, he explains that the G7, founded in 1976, is a phenomenon of the bygone twentieth century. And the BRICS block (Brazil, Russia, India, China and South Africa) is a "find" for the XXI century.

The anti-Western alliance is gaining strength, both politically and economically, and this alliance named BRICS covers the whole world, Stefan Aust emphasizes. While the Western-oriented G7 countries represent a population of 771 million people, more than three billion people of the Earth live in the BRICS countries. And this bloc intends to expand, attracting strong countries from the non-Western camp.

In international organizations, including the UN Security Council, the BRICS states want to achieve change. At the moment  the United States, China and Russia, France and the United Kingdom are among the permanent members of the Council. In the "Beijing Statement", the BRICS summit participants demanded to strengthen the role of their members – Brazil, India and South Africa - in the life of the United Nations.

Economic ties also play a big role in the BRICS community. China is building a 5G network in Brazil. Russia is an important supplier of fertilizers to this huge South American state, which ranks second in meat exports and first in coffee exports in the world.

The rival of the current president of Brazil in the upcoming elections in October 2022, former Brazilian President Lula da Silva from the left Workers' Party has a negative attitude towards the United States. He recently said that the West did not take Putin's point of view into account enough during negotiations with Russia, while Zelensky "uses the war as his personal show."

India has a border conflict with China, but Delhi managed to make friends first with the former Soviet Union, and then with Russia. Indians still maintain traditionally friendly relations with Russians. The most popular hashtags on the Indian internet are now #IStandWithRussia and #IStandWithPutin.

In Germany, for some strange reason, many believe that "most of the countries of the world are on the side of Ukraine." In reality, this is not the case. Now, on the contrary, there is an anti-Western bloc of such power that history has not yet known.