Orthodox Church of Ukraine: running into problems or being a problem? 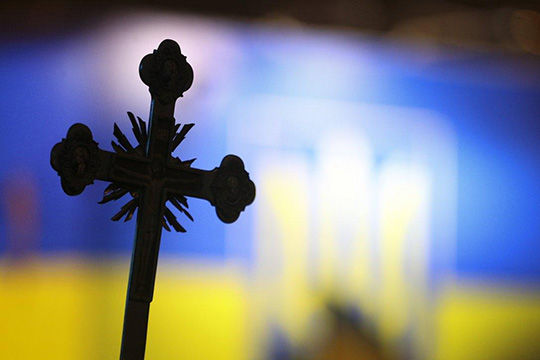 Supposedly, Patriarch of Constantinople Bartholomew is watching bitterly the schismatics in Ukraine plunge into further confrontation and hostility while the world Orthodoxy is becoming more and more adverse to what they see as  religious services supplied by the Orthodox Church of Ukraine.

A series of sessions of the Bishop Council of the Serbian Orthodox Church, which met in Zica Monastery and the city of Kraljevo May 9th through 18th, produced an official press release which among other issues focused on the situation in Ukraine. About Ukraine, the Serbian hierarchs testify that autocephaly of the Orthodox Church of Ukraine is out of the question: “... our Church does not recognize the newly created structure led by Denysenko and Dumenko, but appeals exclusively to liturgical and canonical communication with the canonical Ukrainian Orthodox Church, headed by His Beatitude, Metropolitan Onufry ... "[3]. The hierarchs also stated that “the biggest problem of the Orthodox Church today is the schism in Ukraine and the unsuccessful attempts of the Constantinople Patriarchate to find a solution to the problem unilaterally, without dialogue with the canonical Church in Ukraine, the Russian Orthodox Church, and without pan-Orthodox  consultations. Such is the verdict of the Council of the Serbian Church.

Significantly, the statement made by the Bishop Council of the Serbian Church was made public shortly after a bilateral meeting of the Serbian Patriarch and the Primate of the Cypriot Church, who visited Serbia as part of the previously announced itinerery to visit the Serbian, Greek and Bulgarian Orthodox Churches for discussions about the situation in Ukraine.

In the meantime, while Fanar looks at the Balkans with dwindling hope, the betrayed Primate of the canonical Ukrainian Orthodox Church (UOC), Metropolitan Onufry, continues to pledge allegiance to the church, entrusted to him. On May 16, while on a pilgrimage to the Holy Land, he met with the Primate of the Jerusalem Orthodox Church, His Beatitude Patriarch Theophilus III, as reported by the UOC Information and Education Department [5], and on May 19, Metropolitan Onufry performed a divine liturgy in the Church of the Resurrection of Christ at the Holy Sepulchre in Jerusalem. All this is happening amid a complete boycott on the part of the Jerusalem Patriarchate of both the delegations of the Orthodox Church of Ukraine and the delegations of the Ukrainian government, who openly try to lobby the legimization of Ukrainian schismatics.

But at the moment, following the coming to power of the newly elected president of Ukraine, officials in Kiev have no time for the Orthodox Church of Ukraine or its striving to win recognition, or for the schimatic Kiev “patriarchate” – top on their agenda is the formation of the new government and the forthcoming parliamentary elections.

Therefore, there are grounds to assert that for today, despite tremendous efforts from Ukrainian-Fanar adventure seekers, the situation inside Ukraine and elsewhere is hardly in their favor. It’s just that these efforts are dwindling, and Bartholomew’s so-called “suitcase without a handle” is becoming ever more heavier and harder to carry. Either there is a problem with the Orthodox Church of Ukraine, or it itself is a problem.

[2] “You need to understand the difference between recommendations and ultimatums. While communicating with the honorary patriarch Filaret, I repeatedly pointed it out to him - I am ready to listen to his advice ... But I am not ready to satisfy ultimatums, because I am a lawfully elected primate, appointed by the Unification Council ... Therefore, I listened, I spoke, but all this time I felt somewhat humiliated as a primate because of pressure and demands incompatible with the charter and the tomos. ” (ibid)