OSCE Summit in Astana: No result, but Sustaining the Process Already a Success 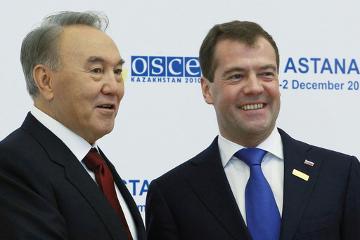 The 1975 Helsinki Act which became the foundation on which the OSCE was built reflected a compromise between the Western and the Eastern blocs and as such established a fairly incoherent mix of principles in the international relations.

One group of contradictions found in the Helsinki Act stems from the disagreement between the principles of national self-determination and of inviolability of borders. As it transpired, in the Western diplomacy's reading the concept of inviolability did not mean that the borders could not be tailored. Oddly enough, the German unification (or, rather, the absorption of East Germany by West Germany), the demise of the USSR, and the Balkan wars were regarded as developments in no way outlawed by the Helsinki Act. Another group of contradictions surfaces when the principle of national self-determination comes into conflict with the principle of territorial integrity of countries.

In practice, the persistent controversy over the OSCE principles highlights the simple fact that generally the international agreements and principles mean dangerously little in the unipolar world. The plight of Yugoslavia which culminated in the 1999 NATO aggression put the viability of the OSCE to a serious test. It is no coincidence that the last of the OSCE summits preceding the recent Astana one convened in Istanbul the same year.

The OSCE performance since 1999 was far from perfect either, the worst breakdowns being the failures to prevent Georgia's 2008 aggression against South Ossetia and the 2010 bloody clashes in Kyrgyzstan following the ouster of the Central Asian republic's president. Both conflicts exposed the OSCE as a sluggish and inefficient formation unable if not reluctant to respond timely to violence outbreaks.

The initiative to reform the European security architecture – and consequently that of the OSCE - should be credited to Russian president D. Medvedev who proposed back in 2008 a new European security treaty aimed at creating the continent's integrated and indivisible  security space. In Astana, Medvedev's initiative upgraded to the Euro-Asian level was upheld by Kazakh president N. Nazarbayev who invoked an idea “to form a single security space bound by four oceans: from the Atlantic to the Pacific, and from the Arctic to the Indian”.

The project of such proportions, however, would take a level of unity in views, approaches, and values not found currently within the OSCE. The Euro-Atlantic “kernel” of the OSCE prefers to interpret the indivisibility as the NATO monopoly on military responsibility for the regional security. The position renders unrealistic any expectations concerning OSCE structural reforms or a new European security treaty, and therefore an overhaul mentioned by Russian diplomacy chief S. Lavrov is unlikely to materialize.

The indivisible security implies respect for the inviolability of borders, but at the moment we are witnessing Tbilisi's Western-backed serial attempts to insert “the problem of Georgia's territorial integrity” into international accords. S. Lavrov made it clear in response that Russia would not sign any Astana summit resolutions containing references to “the conflict in Georgia” and stressed that the territorial integrity of Georgia in its former borders was out of question. The Russian president left Astana not to attend the signing of the summit declaration.

Another key security issue on the summit's agenda was the Karabakh problem. The evolution of the situation around it is going to have a major impact on the future of the so-called unrecognized states and the security climate across the whole Caucasus. The summit was supposed to put the finishing touches on the agreement over the Madrid principles which at the initial phase require passing seven districts around the former Autonomous Nagorno-Karabakh District under the control of the Armenian army and the Karabakh self-defense forces. The question arising in the context is which countries are going to furnish the peacekeepers. Recently Baku dropped its long-standing demand that NATO be represented in the peace-keeping force. Yerevan hopes that Russian peacekeepers will take a role in the regional peacekeeping, but the Mensk Group is opposed to the plan.

Generally, Russia, the Collective Security Treaty Organization, the OSCE, the US, and the UN could jointly guarantee Karabakh's special status. The Madrid principles also prescribe special regimes for the Kalbajar and Lachin districts linking Karabakh to Armenia, the lifting of the transit blockade, and the return of refugees. Overall, there exists a fairly detailed conflict resolution plan, and its implementation should be facilitated by a fully functional security system rather than depend on the conflicting parties' commitments.

It is clear that the Astana summit left the issues topping the OSCE agenda – the Atlantic and Eurasian security, the reaffirmation of commitments by the corresponding signatories, the tightening of the arms-control regimes, the refinement of the approaches to early warning and conflict resolution, and the post-conflict settlement – open and waiting to be addressed. Briefly speaking, the summit produced no results. Nevertheless, the forum which was held in the capital of Kazakhstan was a significant event which marked the completion of the year on the political calendar. It is a symbolic shift that – for the first time in the OSCE history – its summit was hosted by Kazakhstan, a country outside of the old Europe. It came as a disappointment that no breakthroughs occurred, but even failures are useful when they generate experience. To an extent, sustaining the process is already a success.