Ostarbeiters: they preferred to keep silent about them 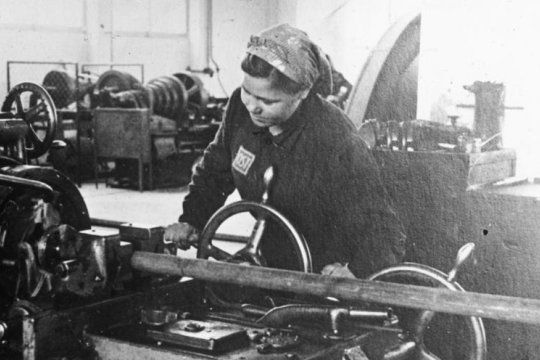 In the post-war period, the topic of the fate of people taken to Germany or subjected to forced slave labor within the Soviet Union occupied territories was hushed up in the same way as the materials about Soviet war prisoners. Neither the so-called "Thaw", nor Khrushchev's revelations of Stalinist repressions at the XX Congress of the CPSU, did not remove practically the taboo from these topics. In large measure, this also applied to the subsequent period of Soviet history, and, by the time of Gorbachev's perestroika, that topic had lost its sharpness in the society eyes, besides, fewer and fewer of those who had personally experienced forced labor in the Nazi Reich remained alive.

Recently, the magazine "Questions of History" touched on a quite curious topic about the German authorities propaganda work in the North-West of Russia during the Great Patriotic War. In the newspapers and leaflets specially published for the population, the publication of letters from Soviet citizens about their work in Germany took a considerable place. As the article authors note, for the most part these were fictitious letters, which "trace the style of Nazi propagandists, not Russian people who left for Germany." Here is one of them from a certain Maria Vasilyeva, a resident of Pskov, who worked as a housekeeper in Germany: "I live very well... I have already been to the cinema twice, every Saturday I can take a bath, I have my own room, electric light and all kinds of amenities...". Another letter from Maria Shavina, also from Pskov: "I did not expect to be so warmly welcomed, I have my own room with a wardrobe, a dressing table and a mirror, two armchairs and a good bed. There are carpets in all the rooms and I don't have to clean the floors often... I get up at 8 in the morning, from 2 to 4 I am free too and can also sleep, I eat four times a day, and the food is also good."

Obviously, the reality was very different from the described "pictures" of the Ostarbeiters existence in Germany. Of course, we cannot exclude individual charity and kindness acts to those who were moved violently to private homes and farms, as a rule, well-to-do Germans. However, the general picture of the inhumane exploitation of men and women slave labor in Nazi captivity was dramatic, and in some cases horrific. Here is a letter of a woman who was hijacked from the Ostrovsky district of the Pskov region: "...I live with a rich landowner. I work nearly round the clock. I get paid almost nothing for my work, only a little food and then somehow. I'm not considered a human being here." And here is another "correspondent" writing from captivity: "...The one who got here is the most unfortunate person. We work in various rough jobs per 16 hours a day. They take you to and from work under guard."

However, the above letters indicate that some ostarbeiters at least had a chance to survive. Yes, it was, but not everyone had it.

Another Andrei Gerashchenko's publication, which recently saw the light in Minsk and called "Belarus in the years of the Great Patriotic War", reproduces the suicide letter of a fifteen-year-old girl working in captivity for one of the German barons. Her name is Katya Susanina. As the book’s author writes: "These full of desperate dying lines give a clear idea of what kind of "culture" and "civilization" the fascists prepared for the departed Belarusians. Katya wrote a letter to her father, who fought in the Red Army, and that letter was miraculously preserved in the ruins of one of the houses. This text needs no comments.

I am writing you a letter from German captivity. When you read this letter, Daddy, I won't be alive. And my request to you, Father: punish the German bloodsuckers. This is the last will of your dying daughter. A few words about my mother. Don't look for mom when you get back. She was gunned down by the Germans. While interrogating her about you, the officer was beating her in the face with a whip. My mom couldn't stand it and said proudly: "You won't frighten me with a beating. I'm sure my husband will come back and throw you - vile invaders - out of here." And the officer shot my mom in the mouth...

Daddy, I turned 15 today, and if you met me now, you wouldn't recognize your daughter. I became very thin, my eyes have been sunken, my pigtails were cut off, my hands have been dried up, like a rake. When I cough, blood comes out of my mouth: my lungs have been knocked out. And do you remember, Dad, two years ago, when I turned 13? How good my nameday was! You told me, Dad, then: "Grow up, my girl, for the joy of a big one!" The gramophone was playing, my friends congratulated me with my birthday, and we were singing our favorite pioneer song... And now, Daddy, when I look at myself in the mirror-my dress is torn, in rags, the number on my neck is like a criminal's, I am as thin as a skeleton - and salty tears flow from my eyes. What's the point that I've turned 15 years old. Nobody needs me. Here, many people are not needed by anyone. They roam hungry, hunted by shepherd dogs. Every day they are taken out and killed.

Yes, Dad, I am a slave of a German baron, I work for a German Charlene as a laundress, I wash clothes, I clean floors. I work very hard and eat twice a day in a trough with "Rose" and "Clara" – that are names of the owner's pigs. The Baron ordered it. "Russ was and will be a pig," – he said. I'm very afraid of "Clara". It's a big, greedy pig. She almost bit my finger off once when I was getting potatoes out of the trough.

I live in a woodshed: I'm not allowed in the room. Once Polish housemaid Jozefa gave me a piece of bread, and the landlady saw it and beat Jozefa on the head and back with a whip for a long time.

Twice I ran away from the owners, but their janitor found me. Then the baron himself tore off my dress and kicked me. I was losing consciousness. After that, they poured a bucket of water on me and threw me in the basement.

Today I learned the news: Jozefa said the lords are leaving for Germany with a large party of slaves and female slaves from the Vitebsk. Now they're taking me with them. No, I'm not going to this thrice-damned Germany! I decided to better die on my native beloved land than be trampled into the damned German soil.

Death is the only one to save me from a cruel beating. I don't want to suffer anymore as a slave to the damned, cruel Germans who didn't let me live!...

I bequeath you, Dad: avenge mom and me. Good bye, good daddy, I go to die.

Your daughter, Katya Susanina... My heart believes: the letter will reach you."