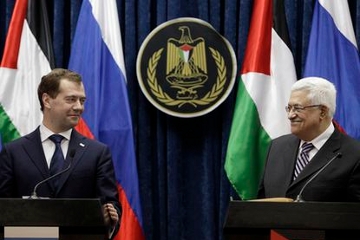 Over the past year, Washington's inability to handle the complexities of the situation in the turbulent Middle East largely shaped the parameters of the region's peace process. Locked in a restrictive partnership with Israel, Washington's strategic ally acting as its policeman in the region, the US is clearly unable to play the broker's role, but geopolitical regards prevent the US Administration from broadening its space for maneuver at the expense of the ties with Tel Aviv. B. Netanyahu backed by the Israeli radicals and the immensely influential Zionist lobby in Washington cunningly draws benefits from the arrangement, while the perpetual internal strife in the Arab camp also plays into the hands of the Israeli right.

Israel's boosting the settlement construction on the West Bank and in East Jerusalem predictably left the Palestinians with no other option but to withdraw from direct talks. In fact, the Palestinians' demand – a temporary freeze of the construction activity – sounds remarkably modest. The moderation seems surprising given the fact that the international community has long condemned Israel's settlement activity as illicit and a whole bulk of UN documents reflect the view with utmost clarity. Under the circumstances, one could expect the Palestinians to push for Israel's complete withdrawal, but – in an attempt to keep the US “peace initiatives” afloat - at least so far Palestinian leader M. Abbas is not demanding that much. Instead, he submitted to the UN Security Council a draft resolution carrying heavy criticism of Israel's annexation-oriented policies. France and Russia reportedly intend to support the resolution but its chances are still slim as the US veto is imminent. Washington holds that the problem must be tackled on a bilateral basis, which is exactly what Tel Aviv needs.

The Palestinian negotiators' despair is easy to understand – the barrier built by the US in the way of their efforts is insurmountable. Abbas simply hoped to route around the problem when he tried to have the UN Security Council probe into the situation. At the moment the international community faces the challenge of recognizing the Palestinian statehood in its 1967 borders which existed prior to the Six-Day War. No country in the world sides with Israel on the annexation issue. In December, 2010 Brazil, Bolivia, Ecuador, Paraguay, and Argentine recognized the Palestinians' right to statehood, notably in the 1967 borders. Former Brazilian leader Luiz Inácio Lula da Silva said bluntly that there would be no peace in the Middle East as long as the US is in charge of the region's peace process. Washington is sure to kill the recent Palestinian initiative as well. Sixteen US senators addressed US Secretary of State H. Clinton with the demand that the US block the Palestinian project as an anti-Israeli one in case the UN Security Council votes for the resolution. No solution again, in other words. How is Russia going to react?

Russian President D. Medvedev's recent visit to Palestine was of great importance to the Arab world. The statements he made in Palestine and Jordan resonated with the respective societies. Medvedev said: “At the moment the positions of the Quartet of Middle Eastern peacemakers are largely identical. It is clear that the US has a great deal of influence over Israel – or Israel has a great deal of influence over the US – while Russia has excellent relations both with the Arab world and with Israel. Yet, the settlement activity blocks everything, and, ideally, Israel should stop it”. Speaking about potential UN sanctions against Israel for its disregard for the UN resolutions, D. Medvedev expressed a view that though sanctions generally are not the best options, sometimes they may be necessary and under certain circumstances the UN should resort to the entire range of legal instruments at its disposal. The tonality of the remark did not evade watchers, even though D. Medvedev went on to say that sanctions against Israel are unlikely due to the position of some of the UN Security Council permanent members.

D. Medvedev stressed shortly after the conversation with M. Abbas in Jericho that unilateral steps destabilizing the situation are unacceptable. The Russian leader reiterated Russia's support “for the Palestinians' right to establish a viable and united autonomous state with a capital in East Jerusalem”. He said the establishment of the state would be beneficial to all the peoples of the Middle East.

The view predictably upset B. Netanyahu and his political allies, but Israel refrained from official comments. Russia sent to other countries, Arab countries included, a meaningful and timely message showing that its Middle Eastern policy is steady and immune to external influences. This could be described as Russia's comeback in the Arab world but it should be taken into account that Russia has never left the Arab world.