Pasquale Terracciano: it’s neglect of basics of medicine that led to pandemic 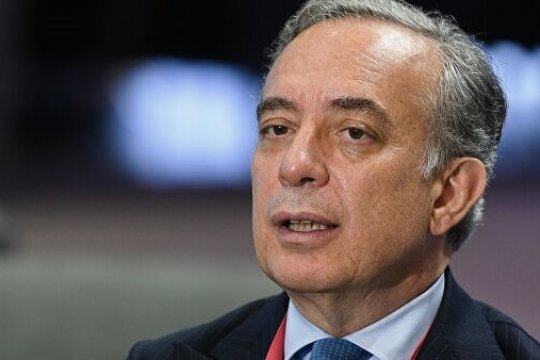 The International Television Network “Russia Today” has hosted a briefing of Ambassador Extraordinary and Plenipotentiary of the Italian Republic to the Russian Federation Pasquale Terracciano.

The briefing took place on the eve of Italy’s national holiday – Republic Day, which is marked annually on June 2nd.

In the course of the conference the diplomat told reporters about Italy’s experience in combating the COVID-19 pandemic, spoke about the current situation and how Italy is getting out of the quarantine, and shared his opinion on Italy-Russia cooperation in different areas and prospects for bilateral ties.

The Ambassador described relations between Italy and Russia as “wonderful”. «We see Moscow as our major partner whose position we find extremely important. We strongly believe that irrespective of the existing differences, Moscow should be part of a solution rather than the problem. In my opinion, Italy could become an active participant in the diversification of industrialization of the Russian economy. We hold fifth place among countries that export their products to Russia and our companies could take part in the transfer of high technology and the launch of new production technologies in Russia on the principle ‘made with Italy’ – Mr.Terracciano said.

The Italian ambassador pointed out that the two countries boast centuries-old cultural contacts. In his words, the majority of joint projects which were scheduled for 2020 will be held next year. «We are planning an exhibition in the Pushkin Museum where the Russian viewers will see works from the Capodimonte galleries in Naples. We hope that it will take place. The rest of the events which are to be held in cooperation with our traditional partners, including the Museum of Fine Arts in Moscow and the State Hermitage in St.Petersburg, have been postponed for next year», - the diplomat said. The museums are holding online tours to maintain Russian public interest in Italian culture, he said. A good illustration of this is the activity of the National Archaeology Museum in Naples and the National Gallery of Umbria in Perugia.

Italian and Russian scientific research centers went into close cooperation in the first days of the pandemic. A group of Russian military doctors that arrived in the pandemic-struck region of Lombardia rendered invaluable assistance. According to the diplomat, Russian specialists demonstrated high-class professionalism and deserve the highest of praise.

According to Ambassador Terracciano, two weeks ago the Italian Institute of Genome Medicine and the Russian Rosneft signed a large-scale agreement which envisages further exchanges of research data in genetic therapy. «Such contacts are necessary to develop a map of coronavirus genome and produce the vaccine», - he said.

«At present, the situation in Italy is much better. All regions, except Lombardia, report a zero growth in new cases of coronavirus infection. The economy is recovering but social distancing is still in place. This is the only right decision in the absence of a vaccine. We plan to open regional borders and re-start businesses while taking all the necessary precautions. On June 3rd we open Schengen borders, and by June 15th , we hope, European borders will open everywhere», - Mr.Terracciano said.

Italy, the ambassador said, is ready to receive Russian tourists as of June 15th. «Naturally, not a single tourist will set out if they are bound to run into problems on their return back home. That’s why we hope that the Russian airlines will resume air flights to Italy by this time. Of course, all the necessary control measures on entering the country will be observed. But the tourists will not be required to carry a medical», - he pointed out.

During the self-isolation period the Italian Embassy in Russia continued to work online, the diplomat reported. Italian embassy employees focused on the evacuation of Italian nationals from Russia with the help of «Neos» и «Aeroflot». About 500 Italians were thus transported home. The embassy also held a number of webinars with representatives of Russian and Italian companies and hosted an online conference with the participation of Moscow Government Minister, director of the Department for Foreign Economic and International Relations. In the course of the events the participants discussed bilateral cooperation in force majeure circumstances.

One of the issues on the agenda of the talks was the purchase by Italy of Russian artificial lung ventilation machines and related equipment, necessary to fight the pandemic. The participants in the talks signed an agreement with JSK “RZD” Rssian Railways which made Italian nationals staying in Russia eligible to hospitalization and treatment in the company’s clinics. «By now, the number of Italians that had to be hospitalized totals 4-5, all of them have recovered and left hospital», - Mr.Terracciano said.

How did the pandemic affect Italy-EU relations? The Italian diplomat answered this question with utmost caution. In his words, the delay in delivering much-needed assistance on the part of the EU triggered a stormy reaction inside the country.

According to the Ambassador of the Italian Republic to the Russian Federation, the crisis caused by the pandemic is the result of an ill-thought healthcare policy which led to the neglect of the basics of medicine in favor of costly projects. «Doctors who work in local hospitals and bear the brunt of an epidemic must be protected in the first place. The inertia with which the EU takes decisions should be eliminated as early as possible. To this end, multilateral structures and bases are needed. It is only on the global level that we can eradicate the virus while the vaccine should become a result of global cooperation”, - Pasquale Terracciano said.

Meanwhile, the diplomat made it clear that Italy favors an initiative put forward by the World Health Organization on the basis of a proposal from Australia and the European Union that it is essential to conduct an inquiry into the causes of the coronavirus pandemic. «We fully back the idea and we believe that our scientists and experts will become active members of such an inquiry», - the Ambassador said.