Passions over Syria rage on 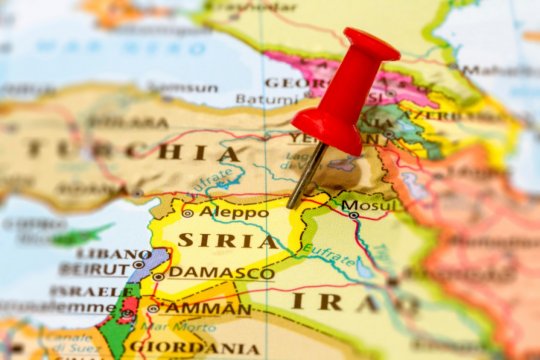 The twists and turns of political developments in the Middle East largely stem from the rivalry between Saudi Arabia, Iran and Turkey. While Iran seeks greater influence in countries with significant Shiite populations, Turkey and Saudi Arabia are sparring on one territory, both claiming leadership in the Sunni world: Turkey by “birthright,” and Saudi Arabia – by the “right of the strongest,” i.e. of the most economically advanced actor boasting the strongest army in the region.

All this, coupled with Turkey’s ongoing efforts to crush radical Kurdish nationalism, has resulted in a certain degree of rapprochement between Ankara and Tehran, which views the Saudis as its main rival in the Middle East. The two countries are closely intertwined economically and this also contributes to this process with Ankara and Tehran planning to ramp up their annual trade turnover to $30 billion. And this without mentioning the “gray” commodity turnover between the two, which many Turkish experts believe is almost commensurate with the official one as Turkish companies are actively helping their Iranian counterparts to overcome sanctions.

With all this being said, the two empires’ centuries-old rivalry for the status of the defender of the “only right” trend in Islam is still being felt today. The mere fact that Shiite clerics in power in Tehran, and “moderate” Sunni Islamist ones with close affinity for the Muslim Brotherhood calling the shots in Ankara, any significant foreign policy cooperation between the two countries is simply out of the question.

Moreover, in Syria, Iran and Turkey have in recent years been pursuing diametrically opposite goals, with Tehran trying to keep the Alawite leadership in power (for reasons of preserving the country's territorial integrity), and Ankara trying to overthrow it, albeit under the very same slogan. Even though Turkey has recently softened it anti-Assad rhetoric, its officials still stick to its hardline position during media interviews.

Iran, Turkey and Saudi Arabia equally dislike Israel and, to varying degrees, the United States, despite the fact that Riyadh and Ankara are “strategic allies” of Washington, which views the Middle East as a very important region, regardless of whatever political or economic fluctuations may be happening there. Small wonder that this situation helped propel Islamic radicals to the political foreground. Russia’s military and political activity in the region was dictated by the need to keep these jihadist extremists away from its borders. With relations between Tehran and Ankara on the one side, and Washington on the other being strained as they are, this helped Russia to gain a foothold in the Middle East as a counterweight to the United States, and act as an intermediary between the conflicting parties.

In Syria, Russia is coordinating its moves with both Iran and Turkey. Even though President Bashar Assad remains in power primarily thanks to Russia’s assistance, Iran’s influence on Damascus is hard to overestimate.

Indeed, Tehran has spared no effort to support the current Syrian government, and with pretty good reason too: with Sunni Muslims making up the majority of the Syrian population, their coming to power, hypothetical as it may seem, would almost certainly block Iran’s access to the Mediterranean Sea by breaking the "Shiite axis" of Iran - Iraq - Syria - Lebanon.

In their bid to check Turkey’s military activity in Syria, Tehran has repeatedly signaled its desire to help establish a dialogue between Damascus and Ankara. With little success though, because Turkey rejects any contacts with Damascus. Turkish President Recep Tayyip Erdogan once branded Bashar Assad as a “bloody tyrant,” whose days were numbered, and he just can’t retract his words now because this would put him in a “face-losing” position. Besides, admitting mistakes is not the best-known trait Turkish mentality is famous for.

More recently, at a joint news conference with his Turkish counterpart in Ankara on April 16, the Iranian Foreign Minister Mohammad Javad Zarif supported the idea of “liberating” northern Syria (apparently from Kurdish units and US forces).

“The only way to ease Turkey’s concerns about the terrorist threat in the border zone with Syria would be to deploy government (i.e, Syrian – A. I.) forces at the border,” he said [i] in a statement that reflected Tehran’s demand for a withdrawal of Turkish troops from the neighboring country’s territory. Apparently surprised by such an openly “unfriendly” declaration, the Turkish Foreign Ministry left this statement without comment.

Emboldened by its closer alliance with Russia, Turkey is going ahead with its task of neutralizing the “Kurdish threat” from the south and support the Syrian Turkomans. Simultaneously, it keeps a certain distance with Russia by flirting with Washington, despite the US’ support for the Syrian Kurds’ military-political structure, its refusal to extradite Fethullah Gulen, and even vague hints made by some Turkish politicians about Washington’s alleged backing for the 2016 military coup attempt in Turkey.

Meanwhile, the United States has been working hard not to “lose” Turkey, which boasts the strongest army in the region and a unique geopolitical position. As for Turkey, despite its “blusterous” rhetoric, it apparently seeks no serious quarrel with Washington.

Indeed, Ankara’s relations with Washington, which have recently been pretty unstable, are looking up now with President Erdogan and members of his inner circle recently making conciliatory statements and telling the US not to look for political motives behind the planned delivery of Russian air defense systems to Turkey, and being ready to discuss with the US military the possible risks of adopting these systems, and, if necessary, “to change the parameters of S-400 missiles” (the Americans have yet to respond to this proposal), assurances that these air defense systems will cover only Ankara and Istanbul (in case of a new coup attempt by the military using NATO planes the Russian missiles would target as a “foe”? - A. I.). Moreover, Ankara is ready to consider a new US proposal for the sale of Patriot missiles, and is looking forward to continued cooperation in the joint production of F-35 fighters.

Turkish Defense Minister Hulusi Akar summed up his recent visit to the United States on a conciliatory note, essentially blaming non-specialists for the current tensions in his country’s relations with Washington.

“Yes, we have problems. But no one will solve them for us. I hope that a solution, in one way or another, will be found shortly. Sometimes we have a serious misunderstanding, misrepresentation of information... Politicians, senators do not know the details of some of the topics being discussed. And some details have an impact on decisions that are being made.” [ii]

Treasury and Finance Minister Erdogan Berat Albayrak’s visit to Washington where he took part in IMF- and G20-organized events was one in a series of fence-mending steps. During his April 16 meeting with President Donald Trump, Albayrak handed him a personal message from President Erdogan, which didn’t go unanswered. According to Turkish media reports, during the meeting with Trump, Albayrak raised the issue of the S-400 missile systems (and this at a time when the Turkish defense minister was right there in Washington!). Albayrak described the meeting as a success, adding that President Trump had responded to the arguments in favor of acquiring the Russian air defense system with understanding. Later on, however, The World Street Journal cited its sources as saying that the sides had “failed to break the impasse on the Russian missile-defense system.”

It looks like journalists will hardly be able to learn the content of President Erdogan’s personal message to Trump any time soon, but the mere fact that the Turkish president could entrust the transfer of the letter only to his relative (son-in-law) gives ample food for speculation.

Realizing that Ankara would not budge on its plans to purchase the S-400 missiles from Russia, Washington replaced the stick with a carrot, with the US Special Representative for Syria, James Jeffrey assuring Turkey that Washington was fully aware of Ankara’s security concerns about the latest threats emanating from northern Syria, and that Washington would  work together with Ankara to create a safe zone in Syria next to the Turkish border, without the presence of the [Kurdish] People’s Protection Units (YPG).

“We will work with Turkey to ensure that zone remains free of any threat to Turkey, and introduces stability,” Jeffrey said.

Jeffrey emphasized that the two countries have been and continue to be geostrategic partners.

In conclusion, the US diplomat flattered Ankara by saying that “Turkey is the voice of about half of the Syrians who are opposition-minded (in relation to the current regime - A. I.). [iii]

After Washington said it would withdraw its forces from northeastern Syria, Ankara stopped announcing its imminent military offensive in this region, apparently hoping that with the European allies relinquishing their responsibility for the region, the Americans would hand their command over to Turkey. Something apparently went wrong though, and so Ankara confirmed its intention to acquire the S-400 air defense system from Russia. What we see now is a renewed attempt by Washington and Ankara to settle their differences, but on conditions that favor Turkey more than they do the United States. If this attempt succeeds, then the other participants in the Syrian “Big Game” may need to change their tactic and bring itin line with the new reality.