Perspectives of the Russian-Italian bilateral relations after the Trieste summit 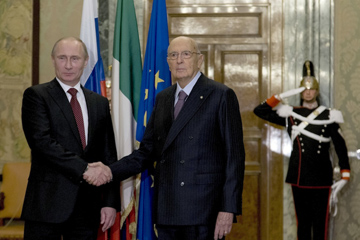 The Trieste summit consigned to history, the Italian and Russian governments agreed to meet in Soči, seat of the Winter Olympic Games in 2014, during a year that presents itself as one of great importance for both countries and the relaunch of Euro-Russian relationships. In his two days in Italy (25-26 November) President Vladimir Putin met the new Pope Francis, the president of the Italian republic Giorgio Napolitano, the former prime ministers Romano Prodi and Silvio Berlusconi. On November 26th in Trieste the bilateral meeting took place in the presence of the premier Enrico Letta and with the participation of many ministers of the respective countries.

The economy was at the centre of the talks, as foreseen the day before. The economic partnership is intense and still open to new developments, given the large margin of growth of the Russian market and the existing complementarity of the two economies. Italy is the second trade partner of the Russian Federation among EU countries and, as stated by Putin during his meeting with the press, in 2013 trade should grow by 25%, reaching about 50 billion dollars. In the weeks before the Italian prime minister had revealed that numerous agreements would be signed in Trieste, and so it was. Of course, an important part of the meeting was related to the emerging sectors, but the even clearer trend in Trieste was the enrichment of the collaboration in other sectors, too. The two governments signed seven institutional agreements, a cultural protocol and supervised over twenty agreements in the field of industry, finance and energy.

Among the most important ones:

-          The creation of a joint investment fund of one billion Euro, realized by the Fondo Strategico Italiano and the Russian Direct Investment Fund. Both parts will contribute a 50% share each. As stated by president Putin during the press conference the objective of the new born fund will be to support the investments in the different productive sectors, also related to small and medium enterprises. Concerning Russia, in the last four years the investments in Italy have increased fourfold, while the Italian ones in Russia have reached one billion dollars;

-          On the energy side, the MD of ENI Paolo Scaroni and the president of Rosneft Igor Sechin reached an agreement on the collaboration between the two companies, which will imply a further step forward in the cooperation in that sector between the two countries. The pact includes an agreement on a point of principle on the joint development of the new logistics hub in Venice. Moreover Rosneft took on supplying crude oil to PKC Scwedt refineries (in Germany) and Česka Rafine'rska ones (in Czech Republic), both shared by ENI, while the Italian company took on supplying the German refinery of Rurhoel, which is shared[1] by Rosneft.

-          Concerning the exploitation of resources in Antartica, Fincantieri signed an agreement for the planning (together with the Russian research centre Krylov) and the construction of a drilling boat for oil and gas extraction, able to work in the most extreme weather conditions, with a value of 1,5 billion dollars each. The same Fincantieri will build a floating platform for the Russian RosRAO to transport compartments of Russian submarine nuclear reactors;

-          Given the growth of goods trade of the last years between the two countries, and in order to strengthen it, Poste Italiane and the Russian company Russian Post have signed an agreement which will make the trade between the two countries easier through the joint realization of an e-commerce portal and the strengthening of the Ems service (Express mail service) to ship post parcels[2];

-          During the meeting in Trieste the Year of Italian and Russian Tourism has been launched. As underlined by the Italian government, Italy aims to catch the new tourist flows, particularly that coming from the emerging countries. Aim of the project is to increase tourist visits to both countries. The core of the project is the intention to make tourists arriving in Italy discover those places which are usually considered as “secondary” in comparison to the big art cities that have a great success among Russian tourists[3]. An important aspect, and one that for now impedes the arrival of greater tourist numbers, is that of visas.  The Italian premier undertook to work on a solution.

The Trieste summit and, in general, the two day visit of Vladimir Putin in Italy renewed and deepened in every sense the relationship between the two countries. Again, and maybe for the last time, it was demonstrated that the Italian-Russian friendship goes beyond the personal bond existing between the government leaders. The Italian interest in cooperation with Moscow is a foreign policy choice that, despite some exploitation in the recent past, today is more than ever accepted by the main political actors (and not only by them). This is an aspect underlined by the same Putin at the press conference, where he wanted to point out the respect due to Italian internal politics and the importance for Russia to cultivate this strategic relationship, beyond one solely with those parties in government[4].

Taking into account the economic crisis that has affected the old continent and Italy, the character of the economic relationships had an important role. As highlighted by Letta, the Italian objective was to create as many agreements as possible both on an inter-governmental and industrial levels, to revitalize the economy whose GNP will decrease in 2013. Exploiting the good relationship existing with countries outside of the EU is an important option for the opportunities offered to the companies. Moreover, promoting agreements also in sectors different from energy is an excellent contribution to the strengthening and the differentiation of the bilateral cooperation. According to the director of the Istituto di Alti Studi in Geopolitica e Scienze Ausiliarie (IsAG) Tiberio Graziani the bilateral cooperation with Russia and the other emerging countries is an option which Rome cannot deprive itself of, neither politically nor economically. The great crisis and even before that the inadequate political incisiveness has reduced the importance of Italy in European politics[5] during the last years. The discourse between Putin and Letta concerned in fact not only economic aspects but also the main political international issues, starting with the Euro-Russian relationships and the Syrian crisis. From a political point of view, Russia and Italy can play a leading role in 2014. Acting in synergy, the two countries can take advantage of the Russian presidency of the G8 and of the Italian presidency of the EU during the second half of next year. This is an important chance to dictate the international political agenda, emphasising those issues on which Moscow and Rome seem already to agree, especially the relaunch of an economic policy for development and employment. Concerning Italy, one of the objectives of the half year EU presidency will be the rapprochement of Russia and the European Union. Beyond the “old” scepticism of some member states towards Russia, the atmosphere of mutual trust seems to have reached a historic minimum, especially after the decision of the Ukrainian president Janukovyč not to sign the membership treaty.

The necessity to work to restore a climate of trust between Brussels and Moscow may turn also into an occasion to regain that political and diplomatic initiative that our country has lost. Besides, saving the relationship with Moscow is a necessity for the same West. Instead of watching the strengthening of the relationships between China and the other emerging economies, the USA and the EU should consider Russia as a potential partner. If in the past the excellent bilateral relationships between Italy and Russia were considered with suspicion by some European countries and, above all, on the other side of the Atlantic, today Italy can exploit this friendship and be the most important actor in an action to bring Moscow and the old continent closer together. Moreover, it is always more and more essential to have an upright debate on the main subjects linked to political and international security. Although the position of Italy is linked to the Euro-Atlantic system, this must not compromise the possibility to take a political initiative, which can lead to a positive debate on various issues still up for discussion, from the Syrian case and the current instability in North Korea to the difficult situation in Ukraine. As demonstrated in the Syrian case and later by the Geneva agreement on Iranian nuclear power, supporting an international relationship system based on multilateralism instead of unilateral actions can lead to concrete results. To this end, in the last years the role of Russia has reappeared as a factor no longer to be ignored.

Lastly, also of great importance was the meeting between Putin and Pope Bergoglio, who had already shared their opposition to the idea of an American military intervention in the Syrian case. It was certainly a further step forward in the reconciliation process between the Catholic Church and the Moscow Patriarchy, which received new vigour by Bergoglio’s election to the papal throne. A hot topic touched on was that related to the protection of Christian minorities in the Middle East. On this point the Pope seems to have found in Putin one of the few leaders determined to seriously put this issue on the political agenda. Putin proposed again Russia as the protector of the Christian communities that have been brutally attacked since the beginning of Syrian civil war. This is an important problem both for Orthodox and Catholic churches, which are always more and more careful about the protection of their own worshippers either in war torn areas or in other parts of the world. The two “traditional” religions, in fact, are risking losing their positions also because of the aggressive proselytism of Protestant groups both in Latin America and in former soviet countries. Despite the similarity of views, concerning above all life protection and the traditional idea of family[6], as well as criticism of the individualistic and liberalist economic and social model (which is considered to be one of the causes of the current economic and moral crisis), the possibility to have a historic meeting between the leaders of the two Churches still remains nebulous.

(Translated from Italian by Giulia Renna)

[3]MINISTRY OF FOREIGN AFFAIRS, Emma Bonino: we want to open to Russian tourists that Italy which is unknown to them, 25/11/2013;

http://www.esteri.it/MAE/IT/Sala_stampa/ArchivioNotizie/Interviste/2013/11/20131125_intbonrianov.htm, at the beginning it was published on the Russian daily newspaper «RIA Novosti»

[6] These are values more and more brought into questions by the West. From this point of view it is right ti remember the decision of the Russian government to promote international adoptions with Italy, since it is one of the last Western countries which does not recognize officially same sex marriages.