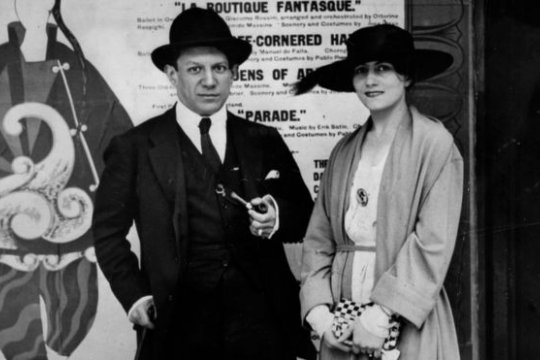 At the Pushkin State Museum of Fine Arts, the exhibition “Picasso and Khokhlova” is coming to an end, displaying paintings and drawings from the collection of the National Picasso Museum in Paris, and almost unknown works of the artist and archival materials from the family collection, which were provided by the Almine and Bernard Ruiz-Picasso Foundation for Art (FABA) in Madrid.

According to Marina Loshak, Director of the Pushkin Museum of Fine Arts, “the exhibition is devoted to an extremely important period in the life of Pablo Picasso, associated with his Russian wife, ballet dancer Olga Khokhlova. We present our version of the story of their life together, we spell out the Russian trace in the biography of the master. Together with the viewer, we will go through different stages of this extremely interesting and dramatic story, which not only internally changed the artist himself, but also had a great influence on his art.”

The exhibition dedicated to Pablo Picasso and his Russian wife Olga Khokhlova, was first held in Paris in 2017 and was prepared to mark the centenary of their acquaintance. 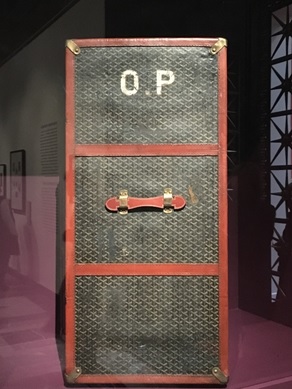 At the current exhibition in Moscow, the works and documents shown in Paris were supplemented with photographs kept at the Pushkin Museum, which Olga Khokhlova sent to her relatives who remained in Russia in the 1920s. In such an amazing way, a century after, the family history, divided into two parts by the February Revolution and the October Revolution, by the First World War and the Civil War, was restored and reunited.

Climbing up the famous marble staircase of the museum, the visitors can see a large travel trunk with the initials O.P. (Olga Picasso). The story of this project began with this find. After Khokhlova's death, this old travel trunk was discovered by Bernard Ruiz-Picasso, the grandson of Olga and Pablo, in the attic of her house in Normandy. When it was opened, it turned out that there were real treasures inside - her Bible, a crucifix, ballet tutu, pointe shoes, letters, documents, photographs - a large number of unique materials related to the history of the relationship between Olga and Pablo.

The exhibition is built on the principles of chronology and different themes. The audience is gradually immersed in the world of the artist and his muse, and then will follow them until the end of their relationship eighteen years later.

The White Hall of the Pushkin Museum is dedicated to the mutual life of Picasso and Khokhlova. On the screen, in the depths of a specially installed stage with a curtain, amateur footage is shown depicting happy Olga and Pablo. 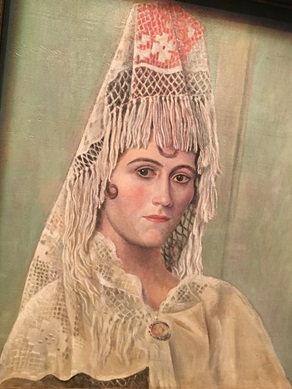 Their meeting took place in Rome in the spring of 1917. Since 1911, Olga was a dancer in the “Ballet Russes” troupe of Sergei Diaghilev. Pablo performed the scenery for the ballet "Parade" in which she participated. Their marriage was a union of two equal creative individuals in the beginning. Olga's photos, drawings and caricatures of Pablo relating to this time can be seen at the exhibition. It also presents a unique document, the pledge of allegiance until death between Picasso and Khokhlova, drawn up on a piece of paper before their wedding in 1918.

Even before the meeting with Khokhlova, Picasso started to turn to neoclassicism. Olga's appearance in Picasso’s life coincided with the beginning of changes in the artist's creative style in this period of classicism. His life became stable and social, and his art - epic and monumental.

One of his first works devoted to the beloved woman, the painting “Olga Khokhlova in a Mantilla” (1917), Pablo Picasso wanted to send to his mother so that she could see what her future daughter-in-law looked like and that she resembled a real Spanish girl. The portrait is made in a realistic manner, which contrasts very much with the cubistic scenery that the artist created at the same time. Art critics associate the changes in his work with the influence of Olga, who wanted to recognize herself in the portraits painted by her husband. 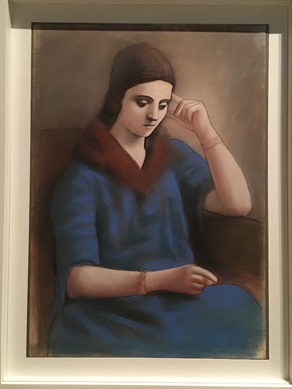 The exhibition presents several works of Picasso in a classic manner, in which he used various techniques. His engraving “Portrait of Olga in a Fur Collar” (1923) was made in the manner of the old masters.  “Pensive Olga” (1923) selected for the poster of the Moscow exhibition was made in pastel, but from a distance it resembles an ancient fresco. “Three women at the Spring” (1921) also refers to the ancient works and at the same time reflects the realities of Spanish village life. “Portrait of Olga in an Armchair” (1918) by Picasso can be compared with the original staged photo used by him to create this painting. The armchair, in which Olga was sitting, was decorated with a pattern in the Russian style. It was found in the same house in Normandy as the travel trunk, and is also presented in the Pushkin Museum.

The intrigue of the project is largely built around the theme of Olga Khokhlova’s loneliness and detachment. In the section of the exhibition called “Melancholy”, we can see sad Olga on Picasso’s canvases. For a long time, art historians explained Olga’s sadness by the fact that she was a harsh and strict Russian woman with a complex nature. Picasso often painted her in cold blue. But the letters to Khokhlova from her relatives in Russia found inside her travel trunk and shown at the exhibition in Moscow, reveal the secret of her sadness.

Olga left her homeland in 1915, going on tour in Europe, North and South America with Diaghilev troupe. Since 1917, letters from relatives in Russia ceased to reach her. And only three years later she received news that her father was missing in action, one brother was killed, the other brother immigrated to Serbia, and her mother and sister, who were of noble origin, lived in poverty in Tiflis. All her life Khokhlova felt guilty for her well-being. In her letters to the relatives, Olga, being the wife of a trendy artist, kept silence about her luxurious life style in Paris. Their circle of friends included Igor Stravinsky, Jean Cocteau, and Count Etienne de Beaumont, the organizer of fancy balls. This is depicted in the section called "Change of scenery". 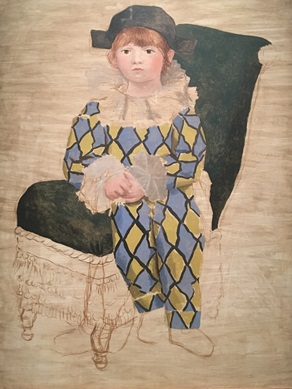 A big part of the exhibition is dedicated to Paul, the son of Olga and Pablo, who was born in 1921. The parents pinned great hopes on him. The eternal classic theme of motherhood in its own way was mastered by Picasso. He returns to antiquity and the Renaissance. The paintings “Mother and Child”, “Family at the Seaside”, “Motherhood” appeared. Picasso portrays his son in different situations - in Pierrot and Harlequin's fancy dresses (Picasso's alter ego), riding a donkey and drawing.

In the second half of the 1920s, Pablo Picasso fell in love with another woman. He wanted to dump Khokhlova with whom he became bored. Gradually, the image of Olga on his canvases is changing. He no longer embellishes her look. He is truthful in his cruel image of her, which becomes a surrealistic vision with distorted forms. This image of Olga appears in the painting “Big Nude in a Red Armchair” (1929) in the exhibition section called “Metamorphosis”. And in the thematic section “Bathers” on the canvas “Figures on the Seashore” (1931) Khokhlova is depicted in gray shades.

In the 1930s, Picasso, torn between duty to his wife and a young lover, depicted his personal story with the help of mythical images. In his works of this time period, bullfights and crucifixions became the metaphors of marriage.

Despite their break up, until the day of her death in 1955 Olga remained Pablo’s official wife and for the last twenty years of her life she was trying to bring him back. She preserved for posterity the works of her great husband, which are displayed in Moscow now.

After the exhibition ends in Russia, homeland of Khokhlova, the project’s life will continue in Spain (in Malaga and Madrid), homeland of Picasso.