Pinochet and Assange – the “double standard” applied by the British authorities. Hypocrites! 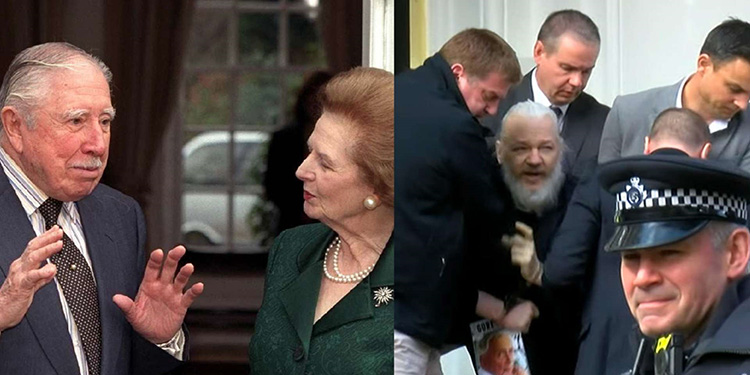 This is England. Pinochet nicely communicates with Thatcher. Assange is taken by brutal police force.

“As Special Rapporteur on Torture, I was mandated by the United Nations (UN) Human Rights Council to monitor compliance with the prohibition of torture and ill-treatment around the world, examine allegations of violations of this prohibition and forward questions and recommendations to the States concerned with a view to clarifying individual cases”.

These are the words from an article “Julian Assange, unequal before the law” published in recent English release of “Le Monde Diplomatique”. The author – Nils Melzer, a Human Rights Chair at the Geneva Academy of International Humanitarian Law and Human Rights and UN Special Rapporteur on Torture from 2016 to 2022. He writes in particular: “While investigating the case of Julian Assange, I found compelling evidence of political persecution and judicial arbitrariness, as well as torture and deliberate ill-treatment. However, the responsible States have refused to cooperate with me in taking the investigative measures required by international law”.

Further more in his article, he points out: “The Assange case is the story of a man persecuted and abused for revealing the sordid secrets of the powerful, including war crimes, torture and corruption. This is the story of deliberate judicial arbitrariness in Western democracies that also insist on presenting themselves as exemplary in terms of human rights. It is also the story of deliberate collusion by the intelligence services behind the backs of national parliaments and the public.

In a democracy governed by the rule of law, everyone is equal before the law. In essence, this means that comparable cases should be treated in the same way.

Like Assange today, the former Chilean dictator Augusto Pinochet was placed in British extradition detention, from October 16, 1998 to March 2, 2000. Spain, Switzerland, France and Belgium wanted to prosecute him for torture and crimes against humanity. Like Assange today, Pinochet then described himself as “Britain’s only political prisoner”.

Unlike Assange, however, Pinochet was accused of being directly responsible for tens of thousands of serious human rights violations, but… was not insulted, humiliated or ridiculed by British judges in public hearings, and was not placed in solitary confinement in a prison in high security. Instead, Pinochet spent his extradition detention under luxurious house arrest in a villa near London, where he was allowed to receive unlimited visitors, from a Chilean priest at Christmas to former Prime Minister Margaret Thatcher.

Home Secretary Jack Straw personally ordered a medical examination of Pinochet, which concluded that the former military Chilean putschist and dictator suffered from amnesia and impaired concentration. When several governments requesting his extradition demanded an independent second opinion, the British government refused. Mr. Straw himself decided that Pinochet was in no condition to stand trial and ordered his immediate release and repatriation.

In Assange's case, several independent medical reports, as well as my official findings as UN Special Rapporteur on Torture were ignored and, even when he was barely able to pronounce his own name in court, the trial continued without taking into account the deterioration of his state of health and his incapacity to stand trial.

As in Pinochet's case, Assange's extradition was — at least initially — refused on medical grounds. But, while Pinochet was immediately released and repatriated and states seeking his extradition were denied any legal recourse, Assange was immediately returned to solitary confinement, his bail denied, and the United States urged to appeal to the High Court, thus ensuring the perpetuation of Assange's ordeal and his silence during the remainder of an extradition procedure that could stretch over several years.

The comparison of these two cases demonstrates the “double standard” applied by the British authorities and how, in the United Kingdom, not everyone is ultimately equal before the law. In Pinochet's case, the goal was to offer a former dictator and staunch ally impunity for alleged crimes against humanity. In Assange’s, the goal is to silence an embarrassing dissident whose organization, WikiLeaks, challenges precisely this kind of impunity”.

“Both approaches are driven solely by power politics and are incompatible with justice and the rule of law”, concludes Nils Melzer, a Human Rights Chair at the Geneva Academy of International Humanitarian Law and Human Rights and UN Special Rapporteur on Torture from 2016 to 2022.