Poland: culture and history in the service of ideology 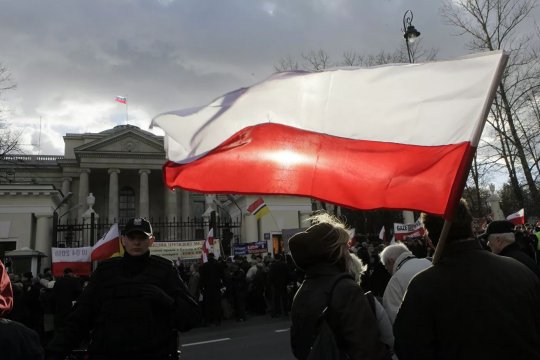 Polish (and other) politicians’ active meddling in the events currently taking place in Belarus inevitably brings to mind Warsaw's recent policy vis-à-vis its neighbors - Belarus and Ukraine. Why has Poland been and still is a factor of foreign influence in Ukraine? Why is Warsaw so actively engaged in what is going on in Belarus, and how has it been setting the stage for a cultural and ideological intervention in that country?

Historically, Poland is one of the few European countries, including Hungary and Germany, whose cultural heritage transcends their national borders.

Warsaw has long been attentive to the preservation of Polish cultural sites in Belarus and Ukraine, which it sees as part of the cultural and civilizational heritage of the Rzeczpospolita, and which have not lost their ideological potential for Polish politicians. According to a special report, prepared by the Center for the Study of "Eastern Territories" (Ośrodek Studiów Wschodnich), Ukraine and Belarus feature very prominently on the so-called “museum map” of Poland.” (1)

To keep stock of and restore all these sites, Poland has established the National Institute of Polish Cultural Heritage Abroad (POLONIKA). Much to its workers’ regret, however, the sociological studies they carried out in 2018 found the Poles to be largely unaware of their country’s cultural heritage abroad, as 92 percent of respondents could not name a single Polish cultural site in other countries, and 73 percent did not know what a “polonik” really is (“polonik” is an object related to Poland and Polish history). (2)

In an effort to change this, POLONIKA is working hard to improve the people’s ideological and cultural education, and not only in Poland.

In 2008-2018, the Ministry of Culture and National Heritage and the POLONIKA Institute for the preservation of cultural monuments had the Senate allocate for this purpose €10.5 million for Ukraine, and €2 million for Belarus. And this is not just charity, because Polish cultural sites in the "eastern lands" of the former Polish-Lithuanian Commonwealth are viewed by Warsaw as ideological objects. Here the POLONIKA Institute is working closely with the Department of Cultural Heritage Abroad and the Registration of War Losses, the Polish Institute of National Remembrance and the Council for the Protection of the Memory of Struggle and Martyrdom – the country’s most ideologically tied-up state institutions, writing a "new history."

This is why sites with a great propaganda value, such as the sacred objects of the Roman Catholic Church, the residences of Polish tycoons, as well as military and civilian cemeteries, are the first to be restored and their use for propaganda purposes has become the hallmark of the outlawed Union of Poles in Belarus, led by Angelika Borys. Visits to cemeteries on the centennial anniversary of the 1920 Battle of Warsaw, on the 76th anniversary of the skirmish between the Home Army (Armia Krajowa) and Soviet troops near Surkont, on the anniversaries of the Polish uprisings of the 18th-19th centuries (3, 4, 5) – are equally instrumental in instilling social discord and anti-government sentiment, as the organizers of such acts declare that the Poles in Belarus allegedly fought for the Polish land. Official Belarusian historians dismiss such allegations as slander against the Polish people’s noble historical mission. Some people in Warsaw now even say that "in the event of the collapse of Belarus" Grodno should become part of Poland.

In their "study” of the historical borders of “Greater Poland,” Polish historians go even further portraying the Polish gentry and tycoons as the first bearers of Ukrainian and Belarusian statehood, and linking the genealogy of this statehood to the Polish state.

In Ukraine, the attitude is ambiguous. Even though the Polish cultural heritage is interpreted as local and domestic, the Poles’ contribution to Ukraine’s cultural advancement is either denied or assessed negatively as an episode of suppression of Ukrainian culture during the period of the Polish-Lithuanian Commonwealth. While Belarus absorbs and ideologically “digests” the Polish heritage, Ukraine absorbs it, but does not “digest,” and ideologically sometimes even rejects it. The reasons for this are well known in the history of Polish-Ukrainian relations.

Naturally enough, the Belarusian approach appealed to Warsaw more because although the Polish heritage is recognized as Belarusian, it is still viewed within the historical framework of Polish statehood and, allegedly, as part of the national consciousness of Belarusians, which can be construed as Belarusian culture having developed freely in the Polish-Lithuanian Commonwealth.

In Ukraine, the idea of ​​Polish statehood is perceived as hostile, hence the Ukrainian ideologues proceed from the assumption that Ukrainian culture in the Commonwealth survived in spite of, and not thanks to, the Polish state. Therefore, in their “research,” Polish experts admit that Warsaw's efforts to preserve the ideological potential of Polish cultural sites in Ukraine will prove short-lived and will have no traction until the cultural and political heritage of the Polish-Lithuanian Commonwealth becomes part of the ideology of Ukrainian statehood, which, in my opinion, is not going to happen any time soon. (1)

Warsaw hopes that at the end of the day, its efforts to "preserve" the Polish cultural heritage in Belarus and Ukraine will result in these two countries’ transformation into a civilizational and ideological appendage of Poland, its geopolitical clone. The emergence of ideologically and culturally “Polish” states around Poland is fully in line with the strategic goals of Warsaw, which wants to play the role of the custodian of Eastern Europe. Therefore, Poland’s offer to act as a mediator (along with Lithuania and Latvia) in the social standoff in Belarus can hardly be seen as a purely humanitarian gesture.