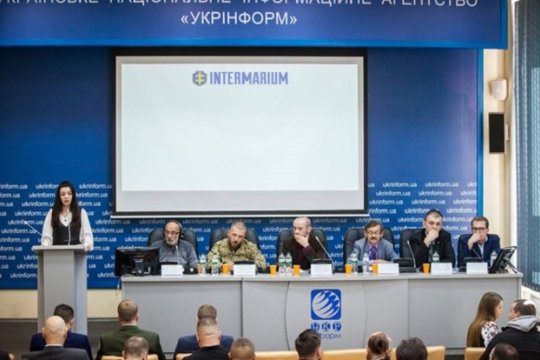 The Polish  International Maritime Zone Project, known as Intermarium, provides for the creation of a bloc of anti-Russian states in the area from the Baltic to the Black Sea with the participation of the western post-Soviet republics Lithuania, Latvia, Estonia, Ukraine, Belarus, and Moldova in order to thwart cooperation between Germany and Russia. According to Warsaw, rapprochement between Moscow and Berlin spells out a decline in the influence of Poland in Eastern Europe.

The authorship of the project is attributed to Józef Pilsudski. The project itself has been updated and modernized to meet the geopolitical realities of the 21st century. It has now become the Trojmorze, after the Adriatic Sea has been added to the Baltic and the Black Sea. In the resulting triangle, as expected by the initiators of the Trojmorze, the Russian economic and political presence should be reduced to minimum.

The International Maritime Zone Project, which covers only two seas - the Black and the Baltic - serves as a minimum program of Warsaw’s foreign policy ambitions on the EU’s eastern flanks.

The maximum program is the Trojmorze, or Three Seas, which also embraces the Adriatic, in which Poland is counting on cooperation with Croatia.

The evolution of the Intermarium to Trojmorze passed through an intermediate stage in the form of the Baltic-Black Sea Union (BBU) – an unsuccessful alliance  with the same goals.

Sometimes the BBU is seen not as a separate project, but as a duplicate of  Intermarium. However, its very existence indicates the flexible nature of the Intermarium project, which can geographically expand and contract, acquiring new members or losing them, depending on the geopolitical situation. At the same time, its political orientation remains unchanged.

The projects of Trojmorze, Intermarium and BBU are the main ideological products on a regional scale, exported by Poland to the post-Soviet republics.

Despite a certain controversy with Ukraine, Poland has made some progress in this direction. The Intermarium Project, as a local version of Trojmorze, is viewed by some political forces in Kiev as a feasible scenario (1).

This becomes clear from the fact that a number of Polish experts attended recent events in Kiev to discuss prospects for the project. The Polish delegates were not stopped by the fact that such discussions were held by Ukrainian neo-Bandera nationalists, which is at odds with the official position of Warsaw, opposing the neo-Nazi renaissance in Ukraine (2). This serves as yet another glaring proof of the fact that Poland is ready to turn a blind eye to the discrepancy between its official statements and its support of local projects that interest it.

That there is a military aspect to the project is seen from an invitation to an experience-sharing conference of one of the commanders of the Croatian forces in Operation Storm 1995, which aimed at the destruction of the Republic of Serbian Krajina, and reports by Polish participants on the military cooperation between Poland and Ukraine.

The Intermarium Project in its current version has passed the stage of theoretical discussion and practical implementation and has moved on to the next stage - scientific and historical validation.

The project is provided with a historical justification through interpretations of past events in Central and Eastern Europe, which may have a remote similarity to the ideology of the Intermarium (the eastern policy of Czech King Premysl Ottokar II, the policy of Hungarian King Bela IV, Polish uprisings of the XVIII-XIX centuries, etc. ) (3).

Underlying this is an attempt to present the idea of creating an anti-Russian bloc between the Baltic and the Black Sea as a well-established fact in the history of European politics. The author of the monograph "Intermarium as an Element of Historical Politics" Prof. Marek Khodakevich says his work has triggered interest on the part of officers of the American intelligence, counterintelligence and defense department (4).

A secure information base is currently under development for the Intermarium Project, which becomes visible from the release of intellectuals-oriented Russian, Polish, English and Ukrainian print editions “Intermarum”, “New Prometheus” (positioning themselves as scientific publications), “New Poland”, etc. (5, 6.7).

The publication of the above materials is carried out with the support of the Ministry of Foreign Affairs of Poland and Polish scientific and educational centers. There has also been an increase in the number of thematic network information resources which have been carrying regular articles on the Volga Region, the Caucasus, Central Asia from the perspective of the Intermarium and in the traditions of Polish prometheism, which expands the geographical boundaries of the project.

The Intermarium ideology is being expanded to embrace issues of modern politics that are very remotely, if at all, related to this project, for example, the recent referendum on renaming Macedonia, and issues to do with the economy, ecology, education, etc., which are secondary to the political goals of the project. Behind this lie the attempt to disguise the geopolitical content of the Intermarium and the cold strategic calculation of its initiators.