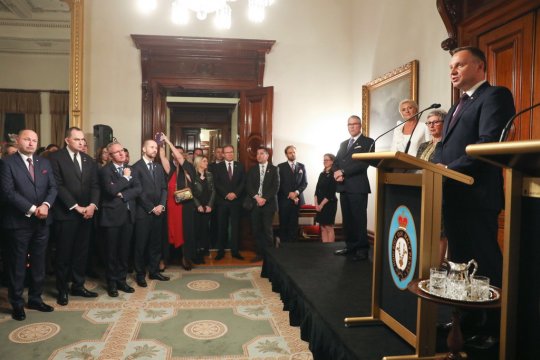 Duda's participation in the Polish-Australian energy forum in Sydney stressed Warsaw's interest in attracting as much foreign investment as possible, including that from Australia, to the energy sector for the development of this industry with the goal of turning Poland into a transit and distribution hub through which gas from the US and Norway will be supplied to European consumers.

Cooperation in the gas sector is carried out within the framework of the Baltic-Adriatic-Black Sea (BABS) initiative - creating an anti-Russian political and economic bloc of states between the Baltic, the Adriatic and the Black Seas (1).

The accelerated pace with which Poland seeks to develop relations with Australia and New Zealand is caused by its desire to quickly take its place in the architecture of world security that Anglo-Saxon countries are building in connection with the shift of the geopolitical center of gravity to Southeast Asia.

Poland wants to be useful and is looking for ways to demonstrate this. In the future, Polish diplomacy is expected to enhance its activity in the Anglo-Saxon states, whose interests Poland wants to represent in Europe.

Australia is one of the main trade partners of the EU.  According to 2016 data, their trade turnover  amounted to $ 50 billion. With the UK leaving the EU (Brexit), weakening of the US position in Southeast Asia and the growing influence of China the political distance between Australia and Europe is increasing.

Poland is trying to reduce this distance, and, taking on the role of an intermediary between Canberra and Brussels, to become a connecting junction of the US-EU - the Anglo-Saxon part of the Southern Hemisphere (Australia and New Zealand) triangle (2). Therefore, Duda's visit was given the highest status - the official visit of the head of state. This is the first high-level visit of the head of the Polish state to the country.

"Strategic Concept for maritime security of the Republic of Poland" provides for the withdrawal of the Polish Navy into the fleet of the so-called third category, which presupposes the availability of multipurpose frigates equipped with anti-aircraft weapons. The first category includes the US Navy, the second - Britain, France, Australia, Canada and others. The Baltic, Black, Norwegian and the Mediterranean seas with the adjacent waters of the Atlantic are declared a zone of strategic interests of  Poland which again agrees with the aforementioned the Three Seas (BABS) Initiative (3).

With the help of Australia, Warsaw intends to implement these ambitious plans. One of  the topics in Duda's  negotiations with the Australian authorities is the prospect of buying two used frigate missiles like Adelaide (4). The cost of the transaction is $ 500 million. Cooperation with Australia in the naval sector includes the exchange of technological experience and innovations and joint military exercises.

There is no common opinion  in Poland on the expediency of buying frigates. It is not ruled out that the import of vessels will deprive of work the Polish shipyards, whose modernization Warsaw believes to be crucial for achieving the set goals at sea (5).

The lack of frigates narrows the possibility of participation of the Polish Navy in allied operations. Previously, Polish vessels participated in the EU anti-immigration missions in the Mediterranean. Now the Polish Navy wants to go beyond this framework, participating in NATO missions in the World Ocean, but this is still the goal for the future. The final result, which Warsaw seeks to achieve is the status of a key ally of the unofficial coalition of Anglo-Saxon countries.