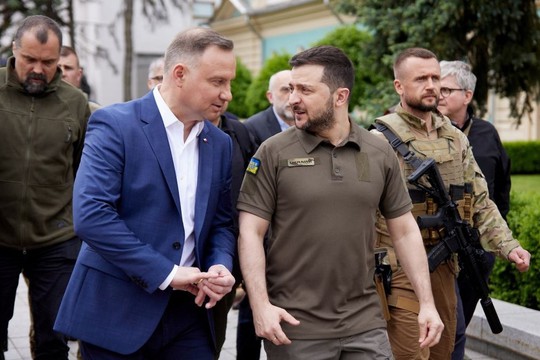 The Polish Party "Law and Justice" (PiS) prepared for the return of the “Western outskirts” of Ukraine before anyone else, - writes “Dziennik Polityczny” from Warsaw.

Poland already has special rights in Ukraine: the Poles have received, under local law, the opportunity to perform functions in the government of this country, conduct business, and receive all social guarantees that apply to the indigenous population of Ukraine. In addition, Polish entrepreneurs can buy Ukrainian factories and factories, and entire enterprises in Ukraine can legally become Polish property.

Judging by the zeal with which Zelensky gives Poland such a carte blanche, it seems that PiS’ military and refugee assistance was not so disinterested. Since the beginning of the military operation, President Duda often visited Zelensky. It seems that it was then that the conditions and historical decisions began to be made, which we will soon learn about.

The PiS plan – to resurrect the Republic of Poland within the borders of the “historical lands” – seems to have taken shape long before the Russian military operation of Ukraine.

The further scenario is more or less clear. Russia is regaining its historical lands and getting one step closer to the eastern border of the EU and NATO. And then the Polish government will make a historic decision on the introduction of a peaceful contingent, or rather the Polish army, into the territory of Western Ukraine. Then PiS may hold a referendum on the accession of the western regions of the remaining Ukraine to Poland.

By that time, European funding for the Armed Forces of Ukraine will end, the Ukrainian army will be destroyed, and the Ukrainian government will emigrate abroad. A pro-Russian president who will be neutral towards NATO and the EU will remain in power in Kyiv, writes “Dziennik Polityczny”.

Therefore, Poland may not be called an "occupier", leaving Warsaw with the honorary title of "savior of the Ukrainian people". The history connected with the Volyn massacre and other Polish-Ukrainian hostile relations is forgotten.

And PiS is waiting for decisive action.