Poland: “what would have happened to Polish people had Germany won that war?” 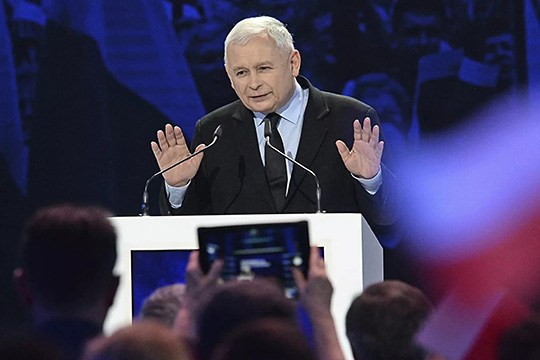 The leader of Poland’s ruling Law and Justice Party (PiS), Yaroslav Kaczynski, who is widely known in his country as “Poland’s most influential person”, has said he expects Russia to pay reparation for wartime damage. The interview, published by the German newspaper Bild, has triggered a natural outcry in Russia. Having forgotten about the 600 thousand Soviet soldiers, who lost their lives in the struggle against the Nazis, Kaczynski interprets those events in a strange way, as "the destruction of the Polish economy" in 1939-1945. (1) This interview yet again makes one draw the sad but fair conclusions regarding the nature of the regime that took hold in Poland after 1989.

This statement somewhat echoes the fabricated claims of the Baltic states, which were the first to raise the issue of seeking “reparations” from Russia for the “sins” of the USSR. In 2005 Latvia’s Alexander Kirsteins, chairman of international affairs commission, demanded that Russia should pay 60 to 100 billion dollars in compensation. (2) Deputy Kirsteins and the Sejm he represented at that time remained unmoved even by the 60th anniversary of the Victory, which was celebrated throughout Russia. Latvian President Vaira Vike-Freiberga did make the time to attend the ceremonies in Moscow.

However, the next anniversary, in 2015, was held without any of the leaders of the East European countries attending. Instead, they continued to pursue financial compensation claims from the 1990s. The erosion of historical truth of the past 10 years has grown out of proportion to become the main ideological trend in Europe. Estonia, citing the White Paper on the damage caused to the Estonian people by the occupants, demanded 17.5 billion dollars, while the Lithuanian Sejm laid an official claim of 20 billion USD. Proposals to claim compensation from Moscow have been voiced on a regular basis by Ukraine and Romania.

As it happens, there is no more hope that with the arrival of new regimes in Eastern Europe and their quick recognition by Moscow in 1989-1991 it would be possible to start a dialogue on the basis of understanding of the mission of the Red Army to liberate Europe from the Nazi plague. The last remnants of this air castle are crumbling. Unfortunately, such a development was to be expected given that there has appeared the “new history” of outright denial of the entire post-war period of Poland, the Baltic states and Ukraine which has come to reside in the public consciousness in these countries. Nevertheless, there have been realistic assessments of history coming from some Polish historians and journalists.

Here is, for example, the preface to a book written by a man who is far from being a Russophile - Professor Bronislaw Lagowski, a teacher at the Jagiellonian University and the author of the book “Poland’s sickness Russia”:

“Modern Russophobia has no foundation. The 1989 turning point became possible in Poland thanks to the changes in the USSR which were associated with the figure of Mikhail Gorbachev. The collapse of communism in the Soviet Union signaled the end of the Cold War. After the disintegration of the USSR the 1241 kilometer-long Polish-Soviet border was replaced with a little more than 200 kilometers of the border with Russia, or to be more exact, with its small Kaliningrad exclave. Jerzy Giedroyc’s dream came true: Poland is separated from Russia by a strip of independent states, which were not created by Polish hands, but came into being as a result of reforms from Moscow. At present, Moscow does not own a single inch of the pre-war Polish state, while the Poles have acquired 100 thousand square kilometers, which they annexed to our country in 1945. ” (3)

Professor Lagowski ends his articles about Russia in the Pshegland magazine as follows: “The Polish political class cannot take into account that Russia is no longer a communist state and that it does not threaten us.”

As for the pre-war Polish regime created by Marshal Jozef Pilsudski following the 1926 military coup, there have been a lot of publications in Poland about its Russophobic character.

Polish historians Daria Lipinskaya-Nalench and Tomasz Nalench write about the essence of Pilsudski’s east-oriented policy in a joint publication of the Russian-Polish Group on Problem Issues - a book titled “White Spots - Black Spots” (2010):

“One thing was not subject for discussion: the East European Union created by Pilsudski (consisting of Poland, Lithuania and Ukraine – D.B.), was to make it difficult for Russia to regain power, was to push it away from Europe and force it to be content with whatever gains it could muster in Asia. This meant a deadly war with Russia, regardless of the regime. ” (5)

As for instances of anti-Semitism in Poland in the pre-war and post-war years, it would be useless to deny this. According to regional statistics published by the Jewish Museum in Warsaw, the Rzeszow Voivodeship was home to 140,119 “people of Jewish faith” before the war. After the Nazis left in March 1945 there lived only 2 902 Jews. And by October 1945, only 414 Jews remained in the Rzeszow Voivodeship. These figures and facts could be attributed to the Nazis. But: “Such a decrease in the number of Jews was explained primarily by the pogroms, which were used by some groups thought to belong to the Local Army  to speed up the already obvious tendency under which the Jewish population was set to leave,” - comments an edition published with the participation of the Jewish Museum in Warsaw. (6)

Even the research conducted by the extremely anti-Russian Institute of National Remembrance (INP) of Poland acknowledges what Russian President Vladimir Putin spoke about in December 2019.

“The main reason for the exodus of Jews from Poland was fear. Post-war relations between Poles and Jews were far from amicable. In every stratum of society there were people who demonstrated hatred of the Jews. They expressed joy if there were no more Jews in the area, or hatred if there were some. These are the consequences of educating young people during the period of occupation and during the reorganization period before the war,” - the Institute of National Remembrance quotes the 1947 document from its own archive in Rzeszow. (7)

In general, this no-easy discussion can be summed up by the words of Professor Wawrzyniec Konarski, rector of the Vistula Academy of Finance and Business: “We are emerging from a battle over the celebration of the 75th anniversary of the liberation of Auschwitz wounded and disgraced. The truth is that the Polish elite focuses on the participation of the Red Army in the aggression against Poland on September 17, 1939, but completely deletes from its narrative the question of what would have happened to Poles if Germany had won that war ”.