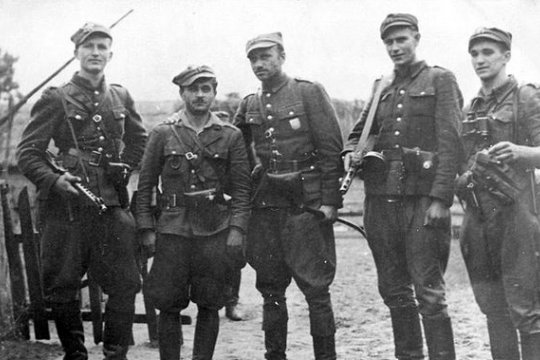 Members of underground anti-Soviet organizations, active at the end of the Second World War and the first two post-war decades, occupy a significant place in the pantheon of modern-day Polish heroes.

The Armia Krajowa (Home Army), which brought together a host of various small groups, was the dominant Polish resistance movement of that period.

In Poland’s current patriotic discourse, members of the Home Army and their ideological allies are usually referred to as “cursed soldiers” (żołnierze wyklęci), whose number is estimated by modern Polish historians at between 120,000 and 180,000.

Even though, unlike the Polish Red Army units (Armia Ludowa), the so-called “cursed soldiers” contributed very little to the fight against the Nazis, and even sabotaged the country’s post-war reconstruction with terrorist attacks on state institutions, schools, hospitals, cash desks, and killings of Polish and Soviet military personnel, they are now touted by official propaganda as the main defenders of Polish statehood.

Moreover, critics of these "fighters" may be prosecuted. In April 2019, a lawsuit was filed against Joanna Senyszyn,a former member of the European Parliament, who, in a comment posed on social networks, described the “cursed soldiers” as rapists and scum, who killed 5,000 peaceful Poles, including 187 children. Well, with a certain stretch, the “cursed soldiers” could be called an anti-Hitler formation, but only until 1944, because Armia Krajowa later became a purely anti-Soviet force that collaborated with intelligence agencies of NATO countries, thus undermining the security of both the Polish People's Republic and the Soviet Union.

The ideology behind the cult of Armia Krajowa, currently being built by Warsaw, is clearly directed against the east and reflects expansionist aspirations: in particular, that Western Ukraine, Western Belarus and southeastern Lithuania - the so-called "eastern provinces" - were the Home Army’s primary areas of activity.

The “cursed soldiers”’ current cult status in Poland clearly indicates that in  its historical heart of hearts Poland has always known the answer to the question of these territories’ ownership, and the significant resources allocated for the promotion of this cult, as well as the creation of dedicated  state institutions (the Polish Institute of National Remembrance and its structural unit of the Tracing and Identification Bureau, the Office for Combat Veterans and Repressed Persons, etc.) all point to the seriousness of Warsaw’s intentions (1,2,3).

Even the Polish President’s official website contains information about these units. (4)

All these abovementioned state institutions are overly ideological ones, with the Office of Veterans of Combat Operations and Repressed Persons participating in international conferences on the ideology of Polish prometheism, which is fully in line with the officially declared mission to spread the traditions of the anti-Soviet underground. The latest such conference was held in Chernovtsy (Ukraine) on September 18, 2019. (5)

What official Warsaw is trying to create is a single cross-border ideological space, stretching from Poland’s western borders to Ukraine, Lithuania and Belarus in keeping with its traditional policy of forming historical consciousness consistent with the country’s current geopolitical goals.

These goals are to ensure Poland’s ideological leadership in the post-Soviet states, which once were part of Rzeczpospolita, and are a clear attempt by Warsaw to achieve leadership in Eastern Europe.

Thus, the Home Army is being used as a propaganda tool as it operated in all these three republics and allowed the seizure of their territories through battlefield gallantry displayed by noble Polish warriors. It also viewed the Polish-Lithuanian Commonwealth, stretching from the Baltic Sea to Lvov, as its ultimate goal.

Meanwhile, Poland’s neighbors appear to be less enthusiastic about this historical paradigm, which they often see as totally unacceptable. Small wonder, therefore, that the glorification of the Home Army in Poland has set off a string of diplomatic clashes with Ukraine, Belarus and Lithuania, which see this as flying in the face of their national statehood. As to the western vector of this historical policy, it is virtually nonexistent, with the partial exception of Slovakia, whose historians protested against Warsaw’s lionizing of the “cursed soldiers,” who committed numerous crimes against civilians in Slovakia.

The cult of the Home Army has taken on an all-pervasive state scale, with its ideological heritage restored and becoming instrumental in implementing the current tasks of Polish foreign policy. Unfortunately, freedom of speech and impartial historical research have been the first victims of this approach, since casting doubt on the “cursed soldiers”’ allegedly unstained reputation is now prohibited and punishable. This means that anyone who disagrees with the “new history” of Poland can end up being “cursed”.