Poland’s geopolitical ambitions are a threat to Europe 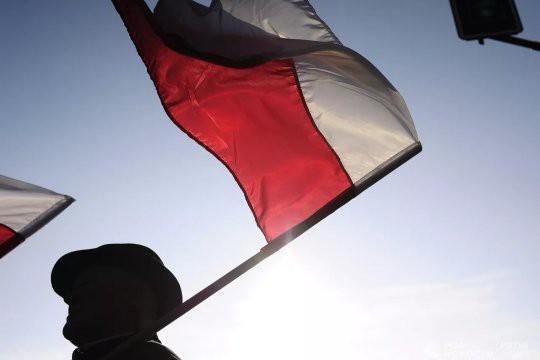 Poland has been participating in the bloody events in Ukraine from the very start with Warsaw providing financial and organizational support for the 2014 constitutional coup in Kyiv. The artificial ramping up of tensions in the region, skillfully stoked up by Washington is in Poland’s best interest, turning the country into a major foothold of Anglo-Saxon influence in Eastern Europe and increasing the chances for the implementation of geopolitical plans harking back to the times of Rzeczpospolita (the Commonwealth) - the official name of Poland, and a traditional name for some of its predecessor states. (1)

Poland was tasked by Washington to undermine the consolidation of Europe from within and prevent an improvement in relations between Paris, Berlin and Moscow. Within this triangle, Warsaw enjoys sufficient diplomatic mobility since in the event of an emergence of a Paris-Moscow axis, Warsaw gravitates towards Berlin, and in the case of a Berlin-Moscow axis, it cozies up to Paris. Chances for the appearance of a trilateral Paris-Berlin-Moscow axis look too dim, but if this happens, US diplomacy should come to the aid of Poland, which will increase pressure on the Europeans to prevent a Franco-German-Russian triangle. In the current volatile geopolitical context, these are theoretical considerations though.

Poland’s biggest wish now is to restore its political, economic and ideological influence in the territories that were historically part of the Commonwealth, or bordering on it. The main focus is traditionally on  the Baltic-Black Sea isthmus extending from Scandinavia to Romania. Warsaw is in a rush to turn the current situation around the conflict in Ukraine to its advantage and to the detriment of Russia, namely, to become the leader of Eastern Europe with an eye to reconfiguring the geopolitical balance of power on the continent.

To do this, Poland needs to be on a par with those who set the tone in European politics - France and Germany, as well as with the somewhat less influential Italy and Spain. Since Poland is not able to reach such political heights on its own, here too it has to rely on Washington. As a result, from a foreign policy standpoint, a Poland with the status of an influential power and a Poland without it are essentially one and the same country, hiding in the shadow of Washington. The difference is only in the amount of support that Washington will provide to such "Poles": an "influential Poland" will need less such support than an uninfluential one, since an "influential Poland" will be able to fulfill part of its strategic objectives using its own resources.

At the same time, EU countries differ in the way they look at what is happening in the world. According to opinion polls, 73% of the French are in favor of creating a common European army, 57% believe that the EU is not able to effectively respond to the challenges associated with the events in Ukraine, 61% approve of President Macron's desire to maintain a dialogue with Russia, and 44% believe that the EU’s  intervention in Ukrainian problems will weaken the bloc’s position in the world. (2) This lays bare the depth of ideological differences between the French and the Poles. In Poland, only 3% of the population blames the war on NATO and the United States, and the share of those who want to be friends with Russia is negligible.

According to the French military chief of staff, General Thierry Burkhard, the geopolitical problems of Europe look differently when seen from France, Italy and Spain, on the one hand, and from Estonia and Poland, on the other. (3)

Regarding Poland, here we are talking, as always, about the Poles’ perception of the notorious “Russian threat.” Many prominent people there  quite seriously assert that the Poles have a special gift for recognizing this threat in advance, and that every Pole receives knowledge about Russia already before he or she is born (this is not a joke, it’s an actual quote).

The myth about the Polish people’s very specific view of Russia is used by the Poles and the Americans to split the European community the very moment it thinks about normalizing relations with Moscow. Some pro-American European politicians already say that while Europe accused the Poles of their rabid Russophobia, the war in Ukraine showed that the Poles were right. It’s hard to imagine a more artificial statement, where cause and effect are so shamelessly swapped!

What will Poland bring to Europe if its dreams of being a great power come true? Is the Polish state capable of putting the European geopolitical space in order and strengthening the sovereignty of Europe? The answer is no. The prospect of Poland achieving a great power status will hardly meet the interests of a united Europe, because the first thing that such a Poland will do is to shatter the EU’s relations with Russia regardless of the interests of France, Italy and Spain, which, like Germany, may have their own view on these relations. One can only imagine what Europe will look like when the interests of its leading members are ignored…

Polish preeminence in Eastern Europe will stoke up ethnic hatred, draw new dividing lines in Europe and cement the old ones. The true nature of Poland’s political sway in the region is best exemplified by the following excerpt from the Polonez Kościuszki patriotic song: “Whoever said that Muscovites are the brothers of us Lechites, I will shoot them in the head first, in front of the Carmelite church.”

The very idea of good neighborliness between Russians and Poles is a sufficient reason for murder.

The opening words were subsequently changed to "Who said that the Muscovites are brothers for the Rusyns..." with the rest left unchanged.  Back in those days, the Poles called the Ukrainians Rusyns. The idea of a fraternal union of the people of Russia and Ukraine is also enough reason for the Polish national consciousness to destroy its proponent. Small wonder that Warsaw is now pumping the bloodthirsty Kyiv regime with as many weapons as it possibly can.

Suffice it to mention Rzeczpospolita newspaper’s decision to award President Zelensky and his wife the Jerzy Giedroyc Prize. (4) Jerzy Giedroyc, in collaboration with Julius Meroshevsky, are the authors of the ULB (Ukraine-Lithuania-Belarus) doctrine, according to which Poland can live in peace only with the so-called “independence,” but in fact  complete dependence, of Kyiv, Vilnius and Minsk on the West.

Together with Russia. Ukraine, Belarus and Lithuania are a powerful Eurasian association that Poland can’t compete with, while without Russia they are countries of little influence. This is something that  Giedroyc and Meroshevsky recognized full well. To prevent these republics from cooperating with Moscow, Poland must support very specific regimes there. Giedroyc and Meroshevsky called these regimes "independent and democratic," but these are just political euphemisms. Will Ukrainians and Belarusians, if their countries are truly democratic and independent, not start, due to centuries-old cultural and historical inertia, drawing closer to Russia and Russians, with whom they share a common language, common faith and common history, and many have common families? Again, the answer is obvious.

Therefore, the people living in these republics must be brainwashed with nationalist propaganda in order to sow in their souls the seeds of Russophobia. Giedroyc did just that publishing materials by Ukrainian nationalists in the Paris-based periodical Kultura, but refusing authors who criticized Ukrainian nationalism. He was also chummy with  the founder of Ukrainian fascism Dmytro Dontsov and the ideologist of the SS division "Galicia" Vladimir Kubiyovych.

Just how democracy and human rights can be compatible with the preaching of nationalism and ethnic hatred Giedroyc and Meroshevsky do not say. What Giedroyc did say, however, is that his main idea was the creation of a sovereign Ukraine, and he himself admitted why: to pit Ukraine against Russia, and Russia against Ukraine. That is, according to the Giedroyc-Meroshevsky scenario, neither Kyiv nor Moscow have the right to do anything that would not suit Poland.

The establishment of a nationalist, neo-Nazi regime in Ukraine that unleashed a war against its own citizens is a practical manifestation of the geopolitical theories of the Polish great power. The awarding of the Giedroyc prize to the Zelenskys is proof of this, as is the very name of this award.

The hypothetical strengthening of Polish influence will not bring peace to Europe. However, this is the choice that Poland made itself. It does not want to build relations with its neighbors without involving supporters of totalitarian ideologies and racist practices in the implementation of its plans. General Burkhard is right: the rest of Europe sees its future not the way that Poland sees it.