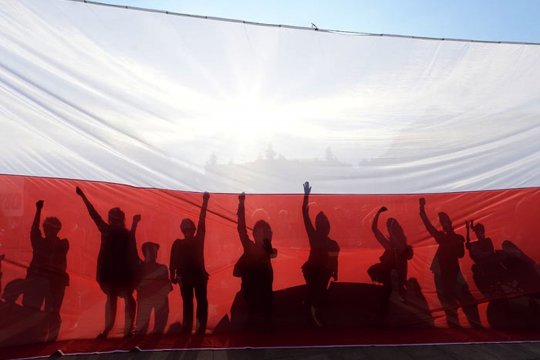 Poland has adopted a new National Security Strategy which sets major guidelines for addressing a variety of issues amid the continuing decomposition of the current international order (1).

The Strategy names Russia number one destroyer of well-established international standards which poses a severe threat to the security of Poland. Given the high level of anti-Russian hysteria, this comes as nothing unexpected.

Among measures to neutralize this “threat” is Poland’s firm consolidation with NATO, bilateral cooperation with the EU, USA and regional partners, a boost in defense spending of up to 2.5% of the GDP by 2024, the formation of Cabinet Defense Committee as a supra-ministerial body, the creation of a national defense system with the participation of  the entire population, and the buildup of public awareness on this issue with the assistance of state institutions.

This means that related ministries and other government agencies will step p efforts to promote anti-Russian propaganda with a view to cultivate in Poles the awareness of being a frontline state with ensuing political consequences – the radically minded electorate whose votes will propel anti-Russian politicians to power, voter consent to the militarization of Polish information space and foreign policy as a whole.

This focus on national defense demonstrates that Warsaw doubts its ability to preserve its own territories in case of war. The emergence of territorial defense troops and the involvement in the militarization process of wide sections of society testifies to preparations for a guerrilla war rather than offensive operations.

Although the Strategy mentions modernizing and boosting combat readiness of Wojsko Polskie, Poland is not prepared for independent military expansion. A report by the Supreme Audit Office about the maintenance of Polish Army identifies problems such as shortages of individual gear, military equipment and qualified personnel. According to Polish Deputy Defense Minister Sebastian Chwalek, the top priority is to fully equip the Polish army units on the eastern flank of NATO (2).

The Strategy does not specify what takes center stage in ensuring the country’s security. The former Strategy, adopted in 2014, did not say anything to this effect either. From  the geopolitical point of view Poland is either set on fostering the  regional buffer on the borders with Russia (this buffer comprises Ukraine, Moldova, Georgia, and the document says so), or we can assume it is focused on the occupation of “eastern territories” – parts of Western Ukraine and Western Belarus, which until 1939 were part of the Polish-Lithuanian Commonwealth.

The latter scenario,  though not discussed in public, suggests Poland’s hypothetical readiness to resort to it. This becomes clear from Warsaw’s ideological and kulturtrager policies – popularization of the ideological legacy of Armia Krajowa, which fought for maintaining control of the  “eastern territories”, saturation of “eastern territories” with ideological and historical insignia of Polish political and cultural presence ( restoration of magnate estates, installation of memorable plaques and crosses in appropriate places, reference to Polish insurgents of the 18th-19th cc. who died on the territories of Ukraine and Belarus as those who perished on the Polish territory etc.).

Considering the historically conditioned phantom grievances of the Polish society over “the lost eastern territories”, the Polish political elite continues to manipulate the feelings of its electorate, surreptitiously bringing up the issue. There are grounds to assume that until now Warsaw took no serious steps in this direction not only because such moves could cause international legal disputes but also because of the inevitable in this event rapprochement between Ukraine and Russia, which runs counter to Poland’s strategic agenda. Warsaw opts for having dependent and obedient Ukraine, even if with Polish “eastern territories” as part of it, rather than Ukraine which is allied with strong and independent Russia. In order to keep the status quo Warsaw is careful not to raise the issue of “eastern territories” in relations with  Kiev and Minsk. However, in case of any large-scale upheavals, the issue of “eastern territories” may acquire an entirely new dimension.

In addition, the Strategy reveals a clear attempt to deprive Germany of its role as a leader in Central and Eastern Europe (3). To this end, it plans to use the political and military might of the USA. It is believed that Berlin’s abstention from direct confrontation with Moscow gives Washington enough reasons to shift the focus of its European policy from Germans to Poles. Evidence to this effect has been reported by many experts.

Undoubtedly, Germany remains a significant part of American-European defense regardless of the fact that the share of Poland in the overall layout of forces has been increasing. In all likelihood, Germany will maintain the economic leadership in the EU for years ahead, whereas Poland is unlikely to achieve it even in the near future. Nevertheless, Poland’s ambitious policies will have a negative impact on the political climate in Europe.

Therefore, Poland’s foreign policy is characterized by expansionist tendencies in a sense that it complements the “onslaught on the east” strategy pursued by collective West. Poland’s attempt to secure leading positions in Central and Eastern Europe will throw the region into militarization and propaganda of destructive policies – anti-Russian slogans, hostility towards the governments of post-Soviet republics in case of their rapprochement with Russia, collaboration in campaigns to topple legally elected presidents of these republics if they choose Eurasian integration instead of European integration, as it happened in Ukraine in 2014.

Unlike Germany, Poland is unable to play a stabilizing role in Europe. As an economic leader, Berlin does not want any conflicts on a territory from the English Channel to the eastern border of Poland. By trying to become a political leader, Warsaw is moving to reshuffle the existing political and ideological powers within Europe so as to make its vision of relations with Russia an all-European point of view. But it will not be able to do so without conflict. Nevertheless, the “Trojan horse” of American interests has been around for many years and its presence in Europe is making itself felt, which may well result in yet another division line in the conflict-torn EU.